More Racist Attacks Reported Across Germany | Germany | News and in-depth reporting from Berlin and beyond | DW | 27.08.2007

Two right-wing extremists have confessed to beating up two Africans in the west of Germany, police said Monday as a new attack on an African was reported and investigations continued into three other racist assaults. 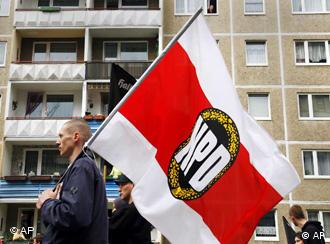 With every attack, banning the far-right NPD rises further up the German agenda

The pair was arrested on Friday after a Sudanese and an Egyptian were attacked after a wine festival in the village of Guntersblum, near the town of Mainz.

A police spokesman said the assailants admitted their involvement in the attack, which put the Sudanese in hospital for several days, but denied hitting him on the head with a bottle.

The incident occurred on the same evening as eight Indians were attacked and chased through the streets of Mügeln after a local festival in the town in Germany's former communist east.

In a series of attacks late Friday evening, a man from Ghana and an Iraqi were assaulted and racially abused in two separate incidents while a mob went on the rampage in another town.

The 36-year-old Iraqi was beaten with a baseball bat by a man who set his dog on him at a tram stop in the eastern city of Magdeburg. Police said Monday they were looking for a suspected right-wing extremist in connection with the assault. 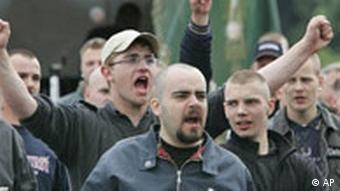 Two men were being questioned in Braunschweig on Monday after a 49-year-old Ghanaian was beaten up in what police said might have been a racially motivated attack or a drug-related incident. Police said one of those involved had links to the right-wing scene.

In another incident on Friday evening, a mob of about 40 young men went on the rampage at a fair in the eastern town of Bützow, smashing stalls and pelting police with bottles.

Police said members of local right-wing groups were involved in the rampage, which also targeted a snack bar operated by a Pakistani who has lived in the town since 2002.

"I was afraid for my life," Mahmood Saqib told reporters on Monday. The mob also shouted anti-Turkish slogans, said Saqib, who was in his flat above the premises at the time.

"We'll come up and finish you off," they yelled at him, he said. 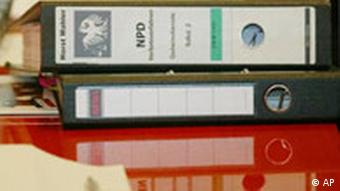 Previous attempts to ban the NPD have failed

The incidents rekindled calls for a ban on the extreme right-wing National Democratic Party (NPD), which is represented in the regional parliaments of two of the eastern states where the attacks occurred.

Leading German politicians have expressed doubts whether a ban could be imposed after a similar attempt was quashed by the country's top court in 2003.

The deputy president of the European Commission, Franco Frattini,
called for the banning of the NPD after the attack in Mügeln.

He said in an interview with the Bild am Sonntag newspaper on Sunday that neo-Nazis represented "a threat" and "an ulcerous cancer for democratic countries like Germany."

German Chancellor Angela Merkel condemned the attack in Mügeln as "extremely grim and shameful" and a government spokesman said it was harmful to Germany's image abroad.

As Germany Struggles With Extremism, Calls for New Party Ban

Calls to ban the far-right NPD party have resurfaced in Germany following a mob attack which left eight Indians injured. In a separate incident, that party's leader has been charged with incitement of racial hatred. (25.08.2007)