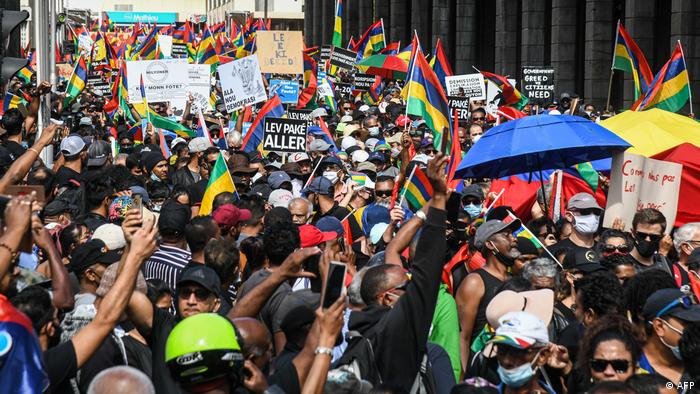 Tens of thousands of people in Mauritius protested Saturday in Port Louis, the capital of Mauritius, over the government's response to an oil spill that happened in early August.

The spill occurred when Japanese bulk carrier MV Wakashio crashed into a reef off southeastern Mauritius last month. More than 1,000 tons of oil spilled into waters that are home to mangrove forests and endangered species.

The protest was the biggest demonstration Mauritius has seen in 40 years, with up to 75,000 marching in the capital against Prime Minister Pravind Jugnauth. Many called for the leader and top officials to step down.

Signs such as "Your incompetence is destroying our island,"  "You have no shame," and "I've seen better Cabinets at IKEA" were seen being carried by protesters, who were also outraged over the alarming discovery of dozens of dead dolphins in recent days. "This rally is an occasion to send a message to tell Pravind Jugnauth he has messed up," 35-year-old protester Jocelyne Leung told AFP.

Public anger has increased after at least 34 melon-headed whales were found dead or seriously ill near the site of the spill.

PM Jugnauth has blamed bad weather for the government's slow response, and denied any wrongdoing. Authorities and experts from Japan and Britain are still investigating the extent of the spill and its effects.

Environmental workers and volunteers have been working for days to rescue wildlife affected by the spill, and creating makeshift oil barriers.

Veterinarians examined two of the dolphin carcasses, but found no signs of oil traces. Autopsy results from other dolphins being washed ashore are expected in the coming days, said the Fisheries Ministry.

Experts have warned about a major ecological disaster, and said that the impact on Mauritius and its tourism-dependent economy could last for decades.

Bulk carrier MV Wakashio, which ran aground on July 25, has broken apart. The front part is reportedly being towed and will be sunk at least 1,000 kilometers off the Indian Ocean island nation of Mauritius.