A first painting from the trove of late art collector Cornelius Gurlitt has been returned to its rightful owners. This is the latest twist in a case surrounding a hidden trove of art which captured global attention. 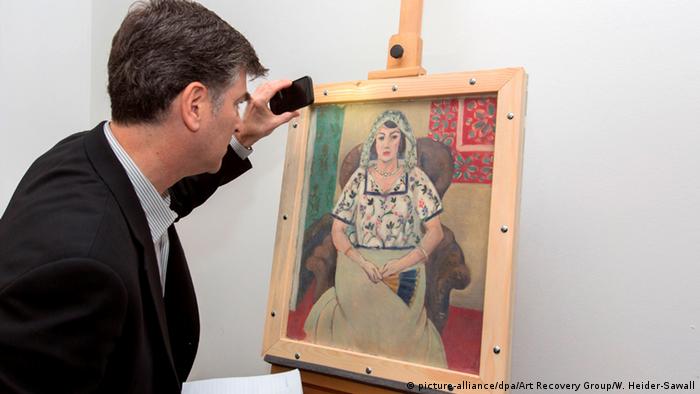 The lawyer Christopher Marinello, who represents the Rosenberg family, received the painting "Woman Sitting in an Armchair" by Henri Matisse in Munich on Friday.

A court in the city had ruled that two paintings - the Matisse and Two Riders on the Beach by Max Liebermann - could be given back to the descendants, who have been battling for decades for their return.

The Matisse painting had been stolen from Jewish art collector Paul Rosenberg during the Nazi period.

"The heirs of Paul Rosenberg are happy to confirm their receipt of Henri Matisse' 'Woman sitting in an armchair," which was found in Cornelius Gurlitt's Munich home in 2012," the family said in a statement.

It was part of a trove of 1,500 artworks found hidden in the apartment of Cornelius Gurlitt, the son of a Nazi-era art dealer. Prosecutors discovered the secret collection in 2010 after customs officials stopping Gurlitt on a train found him to be carrying a large sum of cash he had received for one of the paintings. But the discovery of the paintings, was made public only in 2013 after investigators had sorted through them, finding paintings by Picasso, Gaugin, Pissaro, Dix and Renoir and others.

His father, Hildebrand Gurlitt, was one of Nazi dictator Adolf Hitler's favorite art dealers. The Nazis considered as degenerate a wide range of modern art such as impressionist or expressionist paintings and sketches; they seized or forced the sale at low prices of many artworks, which they then destroyed.

In the 1930s, many Jews sold their collections and valuables - often at low prices - to finance their escape from Nazi Germany.

Before his death in May 2014, 81-year-old Gurlitt bequeathed his collection to the Museum of Fine Arts in Bern, Switzerland, which promised to ensure any Nazi-looted pieces would be returned to their rightful owners and the others would go on public display.

But around 500 artworks, the provenance of which still needed to be verified, remained in Germany for further investigation. Two-hundred specific queries for restitution have been made by Holocaust survivors or possible heirs and an international team, the Lost Art Task Force, is conducting the verification process.

Jewish groups had criticized Germany for the secrecy with which it initially handled the Gurlitt case and Berlin has been at pains to display more transparency on the issue.