Authorities in Germany have recorded more than 490 attacks on asylum seeker shelters this year. The attacks ranged from racist graffiti to arson and, worryingly, the alleged perpetrators were not the usual suspects. 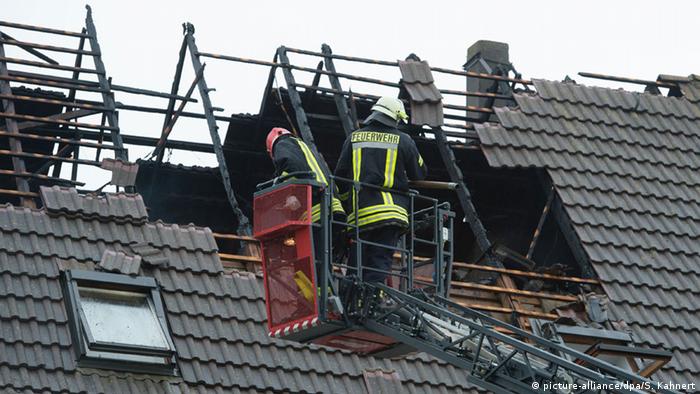 In an interview published on Friday, German Interior Minister Thomas de Maiziere said 493 attacks had been recorded against asylum-seeker shelters this year. That is more than double the number of attacks for the whole of last year.

"We are seeing a massive rise in xenophobic attacks against asylum seekers," de Maiziere told newspapers of the Funke media group. "This is a disgrace for Germany."

Worryingly, two-thirds of the attacks were carried out by local citizens who had no previous criminal record, de Maiziere said. A third of the alleged offenders were already known to the police - due to right-wing extremist offenses or for other reasons.

"I find this growth in the number of people who are using violence, alarming," de Maiziere said, adding that hate mail, insults and foul language were fuelling the violence. He added "That's why we must fight to ensure that there are some things you just do not say and do."

He also warned against what he called a "clandestine acceptance" of the violence.

"Until a short time ago I did not believe that someone could trust themselves to say such things in public. It's crossed the line of what could be considered civilized," the minister said.

Despite the warm welcome given by many Germans to people fleeing war, violence and poverty, the country is showing signs of struggling to cope with an unprecedented influx of desperate people seeking asylum. Some 800,000 people are expected to apply for asylum in Germany this year alone. The figure is more than four times the number of people who came last year. As the height of the movement in September, some 10,000 people were reported to have entered the country on peak days.

In a piece written for the news magazine "Spiegel," Vice-Chancellor Sigmar Gabriel and Foreign Minister Frank-Walter Steinmeier, both of grand coalition partner party the Social Democrats, wrote that the current situation was not sustainable.

"We cannot, in the long term, take in and integrate more than a million refugees each year," they wrote. "Despite the unparalleled preparedness to help shown by Germans, we need to do what is possible so that the numbers of people migrating to Germany is reduced again."

Alarm is growing in Austria over the Bavarian state premier's plans to reduce the number of migrants crossing the border. Austria had grown accustomed to its role as a transit country, Alison Langley writes from Vienna. (09.10.2015)

Sweden has received the first refugees under an EU distribution scheme to ease capacity in Italy and Greece. Nineteen Eritreans arrived on Friday. DW takes a look. (09.10.2015)

Germany is introducing stricter laws on racist violence in response to a series of murders blamed on the neo-Nazi cell NSU. The amendments come amid a new wave of xenophobic attacks against refugees. (01.08.2015)