Around 30 graves belonging to Myanmar and Bangladeshi migrants have been recovered in southern Thailand. The area is frequented by human traffickers who run camps for migrants. 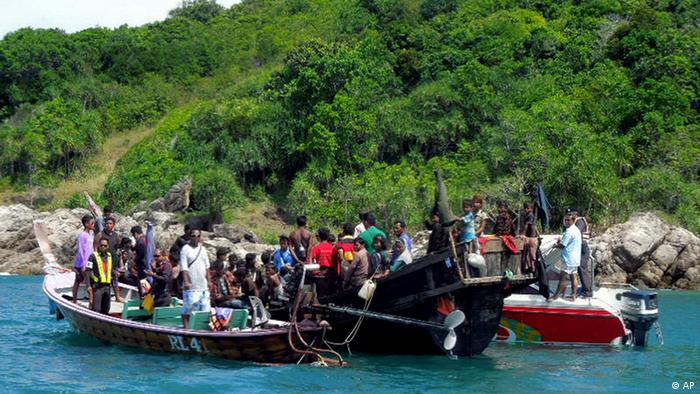 Thai police on Friday found at least 30 graves containing the bodies of possible Rohingya refugees from Myanmar and Bangladesh.

Thousands of persecuted Rohingya Muslims, who have been fleeing Myanmar's Rakhine state since 2012, are brought by smugglers and arrive in Thailand every year (pictured above).

"There are at least 30 graves that have been place marked. We exhumed four bodies today and will continue to exhume bodies," Police Colonel Anuchon Chamat told the Reuters news agency by telephone.

Some of the bodies were buried and others covered in clothing and blankets at a shelter in Thailand's southern Songkla province, police official Weerasant Tharnpiem told reporters.

Some 200 soldiers, police and rescue workers, who were at the site, found two other bodies that had been left in the open. One survivor was rescued from the camp and taken to a hospital nearby.

It was not immediately clear what caused the deaths, although police said they believed the people were Rohingya because human traffickers often put the immigrants in temporary shelters before taking them across the border to Malaysia.

It was the first time police had come across such graves in Thailand, police said. The country is considered to be one of the worst in its anti-trafficking efforts according to the US State Department's Trafficking in Persons (TIP) report, which ranks countries by their efforts to deal with human smugglers.

A UN rights committee called on Myanmar to grant citizenship to Rohingya Muslims. A resolution ramps up pressure on the Southeast Asian country to scrap a controversial identity plan for the minority group. (22.11.2014)

Camouflaging themselves among Rohingya refugees, many Bangladeshi men are taking risky and secret boat trips to Malaysia, seeking work there as illegal immigrants. (19.11.2012)