Hundreds of fighters and civilians have begun leaving the final rebel bastion in the Syrian city of Homs. Rebels have said that intensified government bombing has forced them to agree to so-called "reconciliation deals." 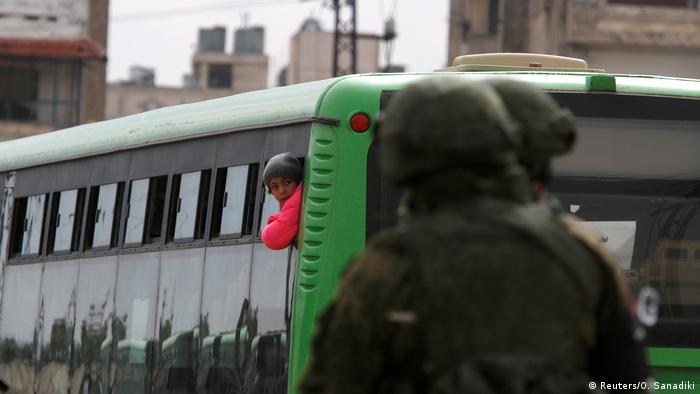 The first wave of green buses pulled out of the rebel-held neighborhood of al-Waer on Saturday as the Syrian government prepares to take full control of Homs, the city once known as the "capital of the revolution."

The evacuation, expected to be among the largest of its kind, is part of a controversial Russia-backed "reconciliation deal" signed this week between opposition fighters and the regime of Syrian President Bashar al-Assad.

According to Britain-based Syrian Observatory for Human Rights monitoring group, some 12,000 people, including 2,500 rebels, will be granted safe passage out of the city. From there, they will be relocated to the town of Jarabulus on the Syrian-Turkish border or the northwest province of Idlib. 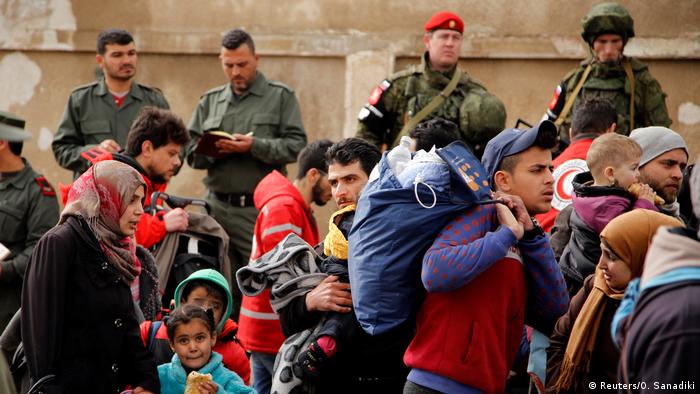 Up to 12,000 rebels and civilians are expected to leave the Homs district in the coming months.

Up to 100 Russian troops were deployed in the al-Waer district Saturday, alongside the Syrian Red Crescent humanitarian organization, to oversee the evacuation.

Homs governor Talal Barazi said he expected between 400 and 500 people to leave the city on Saturday. The evacuation is expected to be undertaken in batches over the coming week.

"The preparations and the reality on the ground indicate that things will go well," Barazi said. "We are optimistic that the full exit of armed (fighters) from this district will pave the way for other reconciliations and settlements."

Al-Waer is only neighborhood in Homs still under rebel-control after government forces took the city in 2014. Similar deals are also in place for several other opposition-held areas, underlining Assad's upper hand in the war as thousands fighters prepare to leave the areas they have spent years defending.

While the Syrian government has touted the "reconciliation deals" as a "workable model" designed to bring the country back to peace after a six-year bloody civil war, the opposition has said that it is being forced into such agreements.

According to the Syrian Observatory, the Syrian army has massively stepped up its siege and bombardment of the Homs district, killing dozens.

The al-Waer neighborhood, home to some 75,000 people, has been under constant siege since 2013. Since then, it has sustained numerous shortages in medicine, and occasionally food. No aid has been able to reach the area for the past four months. In February, Syrian soldiers held up a UN convoy headed to the neighborhood and redirected it towards a government-held area.

At least 49 people were killed in the airstrike that the US military said targeted al-Qaeda militants. Rebels and a monitoring group said the airstrike killed civilians at a mosque. (18.03.2017)