Tens of thousands of protesters have taken to the streets across Iraq in a show of opposition against Prime Minister Nuri al-Maliki. Demonstrators upheld a blockade of the main road to Syria and Jordan for a sixth day. 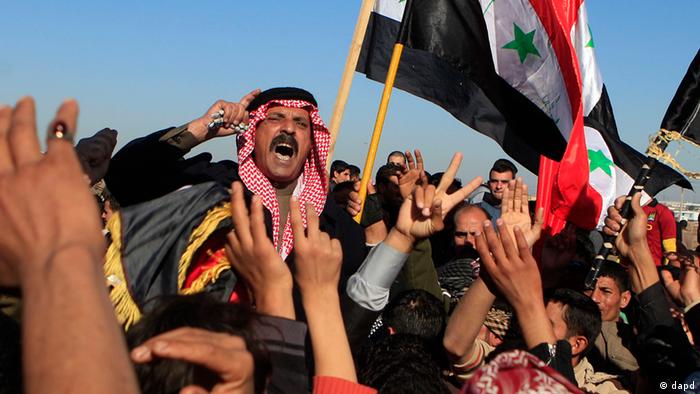 Protesters from Iraq's Sunni Muslim minority poured onto the streets after Friday's prayers in the latest of a series of demonstrations against the Shi'ite Muslim premier.

Near the central city of Falluja around 60,000 people keep up an almost week-old blockade of the main highway. Demonstrators set fire to the Iranian flag, shouting "out, out Iran! Baghdad stays free" and "Maliki you coward, don't take your advice from Iran."

Demonstrations were also held in the northern city of Mosul and in Samarra, where protesters chanted "the people want to bring down the regime."

Many Sunni's have called for the prime minister to step down, accusing him of refusing to share power and favoring Iraq's Sh'iite neighbor Iran.

Speaking on Friday the al-Maliki condemned the protest action. "It is not acceptable to express something by blocking roads, inciting sedition and sectarianism, killing, or blowing the trumpet of war and dividing Iraq," he said at a conference broadcast on state television.

Protests erupted on Sunday after troops loyal to the prime minister detained at least nine bodyguards of Iraq's Sunni finance minister on terrorism charges. In daily protests activists have called for an end to the marginalization of Sunnis, the abolition of anti-terrorism laws they say are used to target them, and the release of the bodyguards.

Their arrest came almost exactly a year after Sunni Arab Vice President Tareq al-Hashemi's guards were also arrested on terrorism charges. An arrest warrant was later issued for Hashem who has since been handed multiple death sentences in absentia on charges including murder. His guards have also been given death sentences.