Maryam Irandoost has vision and a strong will. The coach of the Iranian women's national team continues to work tirelessly in the battle for equal rights for women footballers in her country. 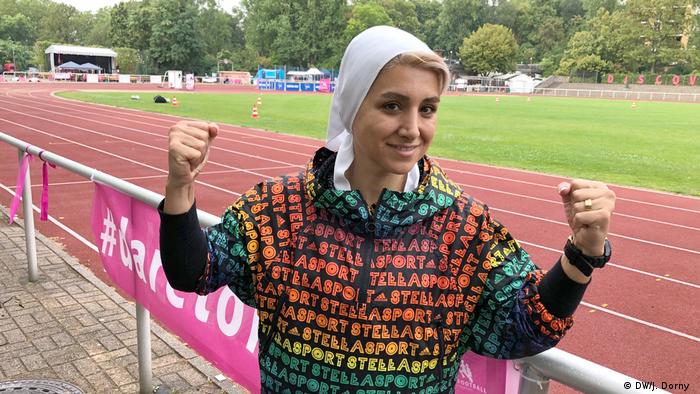 The sky is overcast, but everything else shimmers pink – the colors of Discover Football, a festival of women's football culture, that is marking its 10th anniversary this year.  A lot of football is to be played in Berlin's Willy Kressmann Stadium over the next few days – all in the name of celebrating the women's game.

Maryam Irandoost beams as she walks out to her coaching zone. She and her players have traveled from Iran especially for this festival.

The game begins. The now 40-year-old Irandoost used to play football in Iran, now she is head coach of her country's women's national team and had dedicated herself to the cause of working for equal opportunities for footballers in her homeland.

It certainly hasn't been easy: In 2016 her club, Malavan, based in the town of Bandar Anzali on the Caspian Sea, disbanded its women's team.

"We have a lot mouths to feed. When a storm-lashed ship starts to sink, it has to rid itself of superfluous cargo," is how the club's CEO reportedly explained the decision.

Two years later Malavan started up their women's team again, and just as before, Maryam Irandoost held the position of head coach.

The women's game in general hasn't had it easy in Iran over the past few decades. The Islamic revolution of 1979 effectively put an end to women's football for many years in Iran. 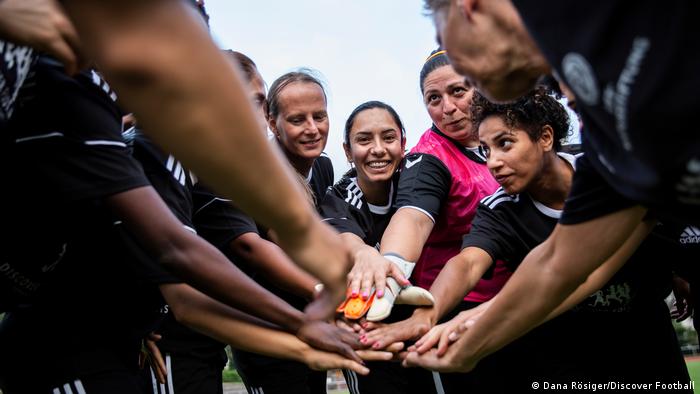 "During that period I learned to play the piano and studied sports, but that didn't fulfill me, something was missing. It was an incredibly hard battle. We were like prisoners surrounded by concrete walls. Now we're playing again and this really energizes us."

That energy is apparent from the way the Iranians go about their business out on the pitch, even if they are not playing as a team at this tournament, but like all the other players, are playing in mixed squads.

"That's what makes women's football in Iran so special," Irandoost says as her eyes well up with tears. "Men no longer say that women don't belong on the football pitch. Progress is being made and there are a lot more opportunities and better player development. These opportunities didn't exist for older women like myself."

Despite the progress, the job is far from over. The Iranian government's ban on women entering football stadiums for men's games has been in place for almost 40 years. Women's football matches are usually played in gymnasiums and all players must wear headscarves. Their arms, legs, necks and ears must be covered for the game. Irandoost points to her arm warmers and leggings, which the players are required to wear under her shorts. 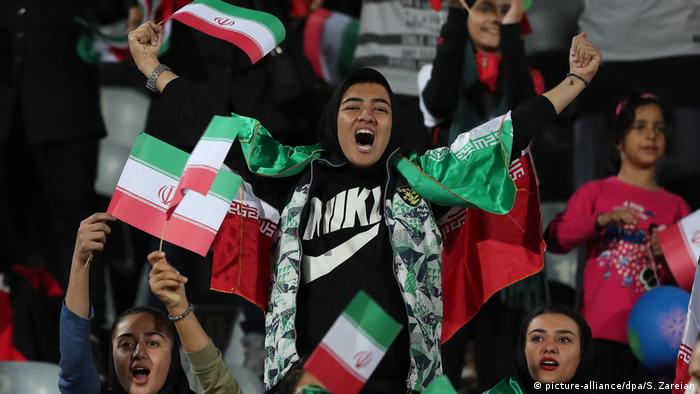 A rare sight: Women were allowed to openly attend a friendly between Iran and Bolivia in Tehran in October 2018

"At the 2010 Olympics, FIFA demanded that the Iranians leave their ears and necks uncovered," Irandoost says. "Because the Iranian federation refused, they couldn't play in the tournament. It's a vicious circle.”

FIFA, which promotes mutual respect in men's international tournaments – with slogans like "Why do we love football? Because out there we are all the same!" – rarely weighs in on the oppression of women in countries like Iran, Sudan, Egypt or Libya.

When FIFA President Gianni Infantino attended the Asian Champions League final in Tehran in November 2018, the regime demonstratively invited around 1,000 women into the stadium. This followed a friendly between Iran and Bolivia a month earlier, when about 100 women were allowed to attend. These were the first women since the beginning of the 1980s to legally watch a men's game. However, it brought no lasting change as the ban remains in place.

The mother of the team

"When I was a kid, I used to go to the stadium with my dad. But in all other respects, my team today is in a better situation than we were then," Irandoost says. "My team is my family, the players are my children and I am the mother. And mothers have the hardest job in the world."

Irandoost should know – she has a 17-year-old son.

At a tournament that fostered an atmosphere to celebrate women's football, Irandoost remained reflective. After gazing at a pink banner with the inscription "daretofight", she opened up about the sacrifices women's players make every weekend in Iran.

"We'd like to fly to games like the men, instead of having to spend hours on a bus to get there. We can spend 40 hours on the road for an away match – 20 hours there, 20 hours back."

Bus travel is cheaper than flying, and while the men's teams can afford to fly, the women cannot. Irandoost also bemoans in the massive gap in earnings for players in the men's and women's game well beyond Iran.

"Compare the contracts of Cristiano Ronaldo with those of Martha or Alex Morgan," she says. "Look at the opportunities given to men! It's not just in Iran, we have to change things everywhere and work together on it."

When it starts to rain, Irandoost puts on a colorful rain jacket and continues talking.

"Football makes me happy and sad at the same time," the Iranian coach says.

"At the age of 10 I told my mother that I wanted to become a boy just so that I could continue to play football – that I wanted a sex-change. My mother was shocked. I said to her: 'If you don't want me to change my gender, please persuade people that I can go to the stadium with my father! And that I can keep playing football.'"

She has always been driven by this desire; to step out into a stadium one day, to smell the grass, to feel the atmosphere.

"That's why I went to the offices of the people in power to get things changed. For six months I marched into the offices with a broad chest, only to leave in tears. But in the end, I got there.”

Indeed, back home, her club, Malavan, have a women's team again. Here in Berlin though, the first half is over and Irandoost smiles with satisfaction.

"For the future, I hope that women will be able to enter the stadiums and watch football matches. I am happy and proud that I became a football player."

Discover Football is a non-profit organization founded by 20 women from Berlin in 2009. It's made up of volunteers working for equal right in football and women's rights worldwide. For the past decade, Discover Football has been organizing festivals with friendly tournaments, discussion rounds and networking meeting all over the world.