On the wet roads of Dusseldorf, Tony Martin lost eight seconds that meant the world to him. The National Time Trial champion failed to meet his own demands - but he can still realize his Tour de France dream. 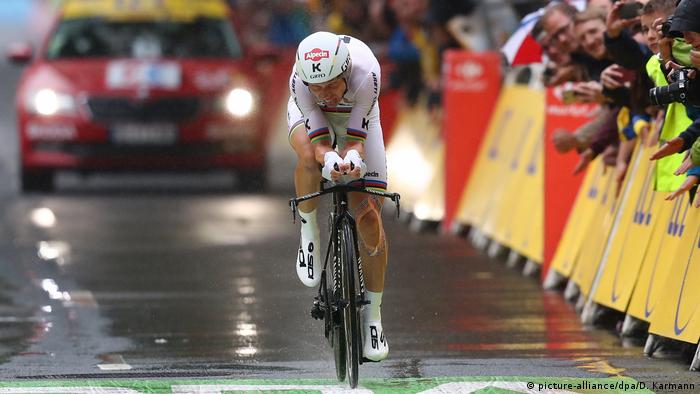 There were so many people around him they appeared to be stealing air from him - air that Tony Martin badly needed. Seconds earlier, the Katusha-Alpecin-Team rider came to a stop, leaning his bike against the wall of a house before sitting on the curb exhausted.

Sweat and rain ran down his bowed head onto the asphalt below while reporters mobbed him. It was in this moment that the German rider learned his time trial result from the first stage of the 2017 Tour de France: fourth, eight seconds behind stage winner Geraint Thomas. "Puh, that's a big gap," said Martin, shaking his head. "The rain stole our rhythm. I think that was my downfall. I couldn't accelerate in the final kilometers. I have to process today."

With his pulse likely still at 180, Martin was faced with questions. The 32-year-old knows his body and knows this discipline. Time-trial is his specialty - it always has been. He has beaten the clock and his doubts hundreds of times before. He is a four-time world champion and he has worn the rainbow jersey this season. He knows where he left those eight seconds: in the acceleration coming out of the wet and slippery corners he braked so hard into. It's exactly this change of tempo that Tony Martin doesn't like. He loves the high-speed straights where he can use his full strength.

"Acceleration out of low speeds cost me," Martin says moments afterwards. "At the end of the race, my battery was dead. I couldn't accelerate across the final kilometers. That's cycling."

Martin might sound reflective, but his disappointment is clear. He spent nearly a year preparing for this day. He studied the 14 kilometer course that former pro Sven Teutenberg measured out. And he set the bar high: the yellow jersey or nothing.

He was the odds-on favorite before the race, and he was the only conceivable winner for the German fans along the course. The experts weren't so sure. The fact Martin finished second in the Algarve, Belgium and most recently at the Critérium du Dauphiné left many questioning his condition. "At the German championships, his lead was only a few seconds. That wasn't a good sign," said former pro Jens Voigt the night before. 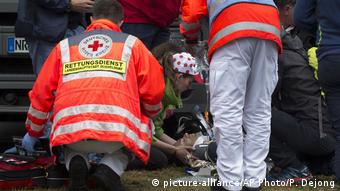 All the signs were pointing in the right direction halfway through the race, though. At the time check after 8,1 kilometers, Martin was leading. Cheered on by thousands of fans, who came despite the constant rain, Martin pushed on, soaking up the "fantastic atmosphere". The Katusha rider said: "It was so loud during the race I could hardly hear the team over the radio and had no idea what was happening. The excitement was great." Martin kept his head, and didn't risk too much in the slippery curves. Others did, and paid the price too. None more so than Alejandro Valverde and Ion Izagirre, who both ended with their races over thanks to broken bones.

Getting over the finishing line is little consolation for Martin. "The chance has gone," he said before he sloped off on his bike. He wanted to make history and win the yellow jersey on German roads. But the shining jersey of the leader is in sight, only eight seconds away. With improvement in the next few days, Martin's dream of yellow could still become a reality.