The conditions were far from ideal on the opening day of the 2017 Tour de France, but Düsseldorf was still a city full of excitement as cycling's premier event began. Not everyone had a good start though. 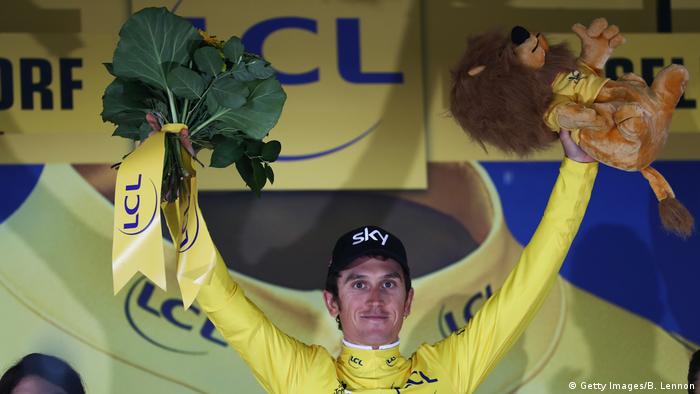 On a wet and windy day in Düsseldorf, Great Britian's Geraint Thomas won the opening stage of the 2017 Tour de France as former podium finisher Alejandro Valverde crashed out of the tour in dramatic fashion.

"It was just a matter of keeping it rubber side down, that was the goal," Porte said afterwards. "I saw [teammate] Nicholas Roche bin it and I was petrified to be honest. It was such a slippery course."

Despite the wet weather, Thomas shrugged off the fact he was fifth-fastest at the time check, and produced an exceptional run-in to snatch the yellow jersey for the first time in his career.

Valverde's wheels slid from under him on a left-hand bend and the rider slammed into the metal barriers. His Movistar team announced on Twitter a few minutes later that he could not continue.

"Unfortunately @aljandrovalverde cannot continue in the race. What sadness to finish a Tour on the first day," read the tweet. While Valverde's crash deals a blow to teammate Quintana's hopes of winning the Tour, the Spaniard's health was a primary concern as fears of a serious leg injury arose as he was taken to hospital in an ambulance.

Frenchman Tony Gallopin also crashed and German Tony Martin, who had dreamt of winning the opening stage in his home country, finished fourth despite leading at the only time check. The historic day in Düsseldorf ended with more rain, but that didn't stop thousands of cycling fans from enjoying the start of the 2017 Tour.