The US holiday honoring civil rights leader Martin Luther King Jr. has this year been linked with protests over the treatment of minorities. Racial tension has risen after police killings of unarmed black men last year. 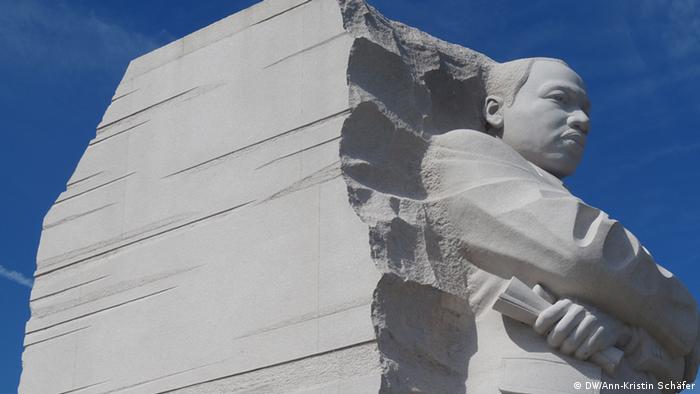 Events honoring the legacy of Martin Luther King Jr., as well as protests against alleged discrimination and police brutality, were organized across the US on Monday.

Some 400 protesters blocked traffic in New York City as they walked from Harlem to near the United Nations shouting "Black lives matter!" while playing King's speeches.

A protest was also organized in Oakland, California, where about 40 people chalked outlines of bodies on the street in front of the home of Mayor Libby Schaaf.

More than 1,800 people gathered to pay respect to Martin Luther King Jr. at a commemoration service in Atlanta, at the Ebenezer Baptist Church where the legendary civil rights leader once preached.

Some in attendance held up signs reading "I can't breathe" and "Hands up! Don't shoot!" invoking the memories of Eric Garner and Michael Brown, two African-Americans who died in confrontations with police last year.

In both cases, grand juries decided not to indict officers for killing the unarmed men. The news caused months of protests and a reopening of old wounds, decades after the rise of the civil rights movement and King's leadership.

"We all need to remember him this day because we still don't have complete freedom," Kelly Pongee, 50, of Jonesboro, Georgia, told the Reuters news agency. She waited for hours to attend the service.

"Look at Ferguson and those other places. Black people and poor people are still treated differently," she added.

"The struggle hasn't stopped," said fellow churchgoer Arthur Williams. "Even with a black president in the White House, people of my hue are still the recipients of injustices."

The country's first African-American president, Barack Obama, spent the holiday honoring King by participating in a literacy project in Washington.

Bernice King, daughter of the civil rights leader, called on the people gathered at the service to act out against injustice but also to remember his message of nonviolence.

"We cannot act unless we understand what Dr. King taught us. He taught us that we still have a choice to make: nonviolent coexistence or violent co-annihilation. I challenge you to work with us as we help this nation choose nonviolence," she said.

Actor David Oyelowo, who portrays Martin Luther King Jr. in the new Oscar-nominated movie "Selma," also gave an emotional speech about his experiences during the film.

"I felt his pain. I felt his burden. I felt the love he had for his family," he said. "I only stepped into his shoes for a moment, but I asked myself, 'How did he do it?'"

"Selma" shows events leading up to the historic march from Selma to Montgomery, Alabama, and the establishing of the 1965 Voting Rights Act.

No end to the turmoil in Ferguson

The deployment of National Guard troops and a night-time curfew do not seem to have calmed the uneasy situation in Ferguson in the US state of Missouri. On the contrary, the mood in the town has deteriorated. (19.08.2014)