Martha Rosler: 'The struggles of our time are against the toxic masculinity of men in power'

The American artist is known for not being afraid to voice her political opinions. DW spoke to her about the state of the American Dream, the role of artists in turbulent political times and US President Donald Trump. 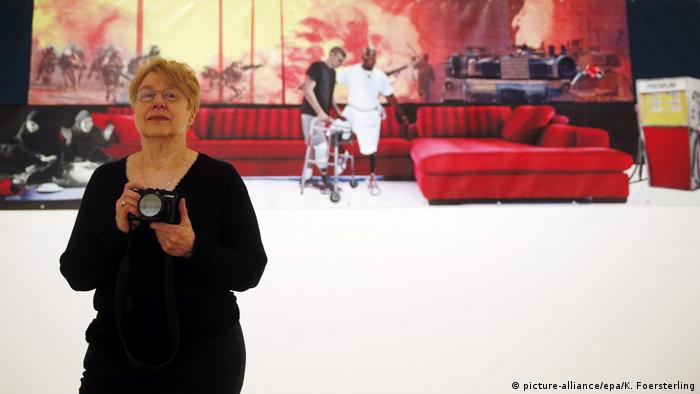 Martha Rosler: Of course, what Donald Trump was trying to say was that the American Dream depends on a kind of bellicose militarism. My works are saying that too, but with a negative value, whereas he is promoting this as a necessary posture for the US to "succeed."

We can identify this attitude as toxic masculinity. If you think about it, the struggles of our times in the US are expressed not only in the Black Lives Matter movement, about vast racial injustice, but also against this toxic masculinity of men in power and the relationship to women who have to cope with it, for example, in the theater, movies, or the art world, or in the corporate world, as well as in everyday life.

It begins with our own president—we imagine that no one with any sense would vote for a man who says the outrageous things he says, but now people have begun to adjust to this state of affairs and imagine that he has to be that way for the US to be "strong." Artists know better—anyone really must know that this verbal violence is not acceptable. But we have to also understand that this bizarre outbreak of divisiveness and hatred is part of a bigger picture in the US of racial and class oppression and an ugly white nationalism based on the need of white people to feel superior to others.

How do you reflect your political standpoints in your work? 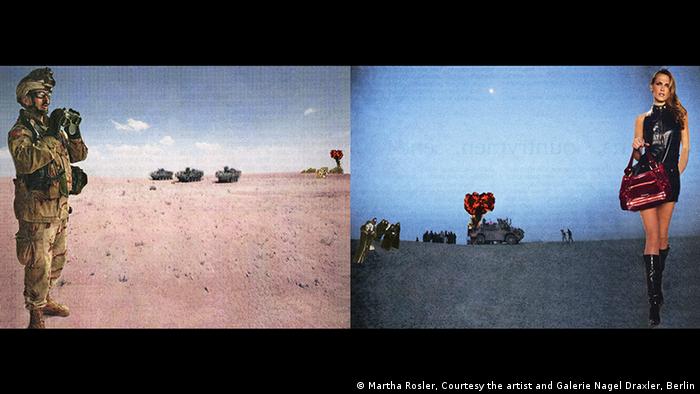 I'm a committed feminist but also an anti-militarist. The works in my series "House Beautiful: Bringing the War Home" (currently featured in the exhibition "The American Dream” at Kunsthalle Emden) were made as agitational works against the war in Vietnam, which we were pursuing at the time, but they are rooted in a feminist sensibility. The works don't have any text; they don't denounce, they simply show a vision of the American home – which is, of course, the woman's domain – with inserted images of the war abroad.

My essential point was that this is one world, not a divided world of the here and the there. It is our world and when we see these images of separate places put in conjunction with one another, we should feel unsettled enough about our worldview and our actions in the world to actually want to rethink and reconsider our relation to it. The works join together the reality of two supposedly disconnected worlds, and that was my best effort at saying we are responsible, both for this impossible idealized vision of purity and cleanliness, with its demands on women, and for the messy destruction of people, killed by our military.

Where do you see the role of artists in the current political configurations: Has their voice become even more important?

I would say that artists have always believed that they can have an important role in moving society towards a different, presumably better future. I share that idea –I feel that art has the possibility of playing a strong role in highlighting the current betrayal of our own ideals and the move toward a dangerous isolationism accompanied by an awful bellicosity and generalized threats of destruction and disaster. With such strident threats from our current regime, artists can, I think, be quite good at casting these sharp changes in tone into relief and suggesting ways for people to regain the possibility of citizen power. 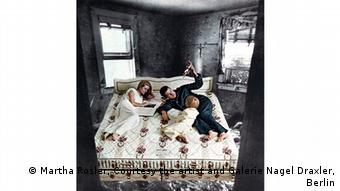 One thing art can do is show that another way, another world, is possible—that there are other ways of understanding the world that are quite different from what you might be hearing at home or in the media. It opens a window, and hopefully even a door, to other ways of organizing our daily lives. I like to think that what my art does is present the viewer with urgent questions: what do you think about this but also, importantly, what do you think we can do about it.

Coming back to the American Dream – has it always been an empty promise?

It depends on what we mean by the American dream. If we define the American Dream as referring to global dominance, of course that's always either temporary or a complete miss. But if it also represented the idea of equality of people and equal access to social resources and opportunities for growth, this is rather laudable. But it is also a promise more violated than fulfilled—it represents a social ideal. In this arena, we have proven ourselves highly deficient, once neoliberalism began to take hold and really the worship of wealth and inequality beginning in the early 1980s; so the American Dream has meanings of various kinds, whether it's a rallying cry or a promise of access in opposition to the presumed elite system in Europe that America was leaving behind. So it did promise a different, more egalitarian world but it also took away with one hand what it was holding out with the other. But dreams are persistent: we should agitate to realize the humane, egalitarian versions!

How Arnold Schwarzenegger, now 70, created his own American Dream

He won plenty of prizes as a bodybuilder and actor, but Arnold Schwarzenegger's perhaps biggest achievement was being elected twice as governor of California. As he turns 70, here's a look at his one-of-a-kind career. (28.07.2017)

US President Donald Trump has made booksellers' dreams come true. North American magazines and blogs have been listing a range of must-read books, in an attempt to understand the new president's behavior. (27.02.2017)