The Serbian artist is redesigning her legendary 2010 performance "The Artist is Present," and will auction tickets to the installation at the Sean Kelly gallery in New York. Proceeds will go to a charity for Ukraine. 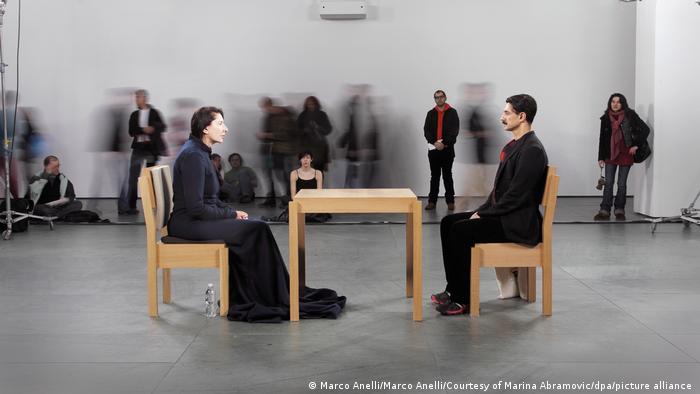 A scene from "The Artist is Present"

The day after the Russian invasion, she said in a video that "an attack on Ukraine is an attack on all of us. It is an attack on humanity and it must be stopped." Unlike the earlier wars in Afghanistan, Iraq, or Syria, this one, she says, feels close, virtually in her own "backyard."

So she found a way, using her art, to support an aid organization. On April 16 at New York's Sean Kelly Gallery, the three people who donated the most in a recent auction will sit opposite her in the new edition of her iconic 2010 performance "The Artist is Present."

The auction on the Artsy platform ended on March 25, and the proceeds went to the Direct Relief aid organization, which, in cooperation with the Ukrainian Health Ministry, provides medical aid as well as long-term support for people affected by the war in Ukraine.

Active in Ukraine before the war

For an artist living in New York, the perceived proximity of the war may sound strange. But Abramovic grew up as the daughter of partisans in Yugoslav Serbia, and has visited Ukraine several times. Just last year, she visited the Babyn Jar Holocaust memorial outside Kyiv, where her most expansive installation to date was inaugurated.

"The Crystal Wall of Crying" is a 40-meter-long interactive "wailing wall" made of coal and studded with giant quartz crystals. It commemorates the site of one of the largest mass shootings in World War II: Over two days in September 1941, more than 33,000 people, mainly Jewish, were murdered by members of the German Wehrmacht and the Sonderkommando SS in the ravine of Babyn Jar. 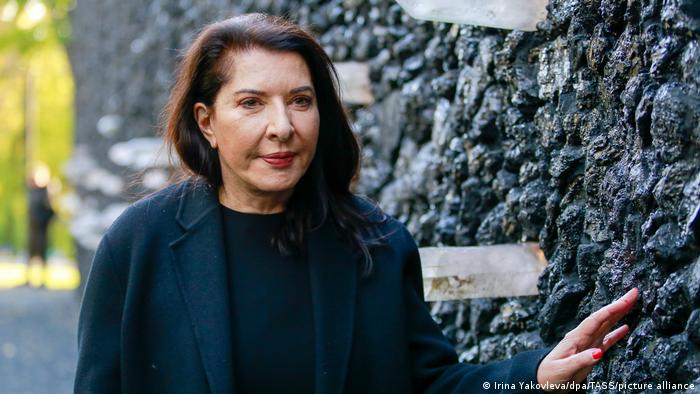 Abramovic standing by "The Crystal Wailing Wall" in Babyn Jar

A wall of healing

Not far from the memorial, the Kyiv TV tower was hit by a missile on March 1. It is almost a miracle that the wall was not damaged. If the "Crystal Wall of Crying" survives the war unscathed, it will no longer just be a place for mourning and remembrance, but also a place for healing. As the artist sees it, and here she quotes the Dalai Lama, "The only way to stop killing is to learn how to forgive." That's the key to humanity, she says.

But that is not easy in view of the daily escalation of the war, the many civilian victims, and the millions of people fleeing within and from Ukraine. Forgiveness is a big word — what counts is to take a stance now, she says. There is no doubt in her mind that Russian artists who do not distance themselves from Putin should be boycotted.

Many of Abramovic's past performances involve her inflicting injuries on herself, as in "Lips of Thomas" (1975/1993/2005), in which she carved the five-pointed communist star into her stomach, then lay down on ice and used a hair dryer to make the wound bleed. Her performances are often a personal transgression of boundaries.

For "Balkan Baroque" at the 1997 Venice Biennale, Abramovic spent days scrubbing bloody, stinking bones in a basement room. Her drastic response to the war in Yugoslavia, which had begun six years earlier, won her the Biennale's "Golden Lion" award. You can't wash oneself clean of the blood of the victims — a statement that is universally valid, also in the war against Ukraine.

'So many more immediate things'

But art doesn't come first right now, she says. When she sees hospitals being bombed and babies carried out, there are "so many more immediate things to be done, more urgent than anything else."

Money for medicine and refugee shelters are a priority right now, she says, to help to save human lives. Her financial contribution is a new edition of her long-term performance "The Artist is Present" from 2010. For three months, Abramovic sat silently, without leaving her chair, during opening hours at New York's Museum of Modern Art. Visitors could take a seat opposite her. With "The Artist is Present," she finally became a legend.

Of the war in Ukraine she says it is not clear how it can and will end. It could lead to a third world war, she says, pointing out that her generation was born after World War II. "But this is so dangerous because we are really pushing Putin's ego. He can't lose, he will destroy every single stone in Ukraine before leaving."

"The situation is much more dangerous than we think, for all people, for the whole planet," she says.