In the past two seasons, Marc-Andre ter Stegen has elevated his standing in the football world as Barcelona’s number one. Plaudits followed, but he’s still fighting to usurp Manuel Neuer as Germany’s starting goalkeeper. 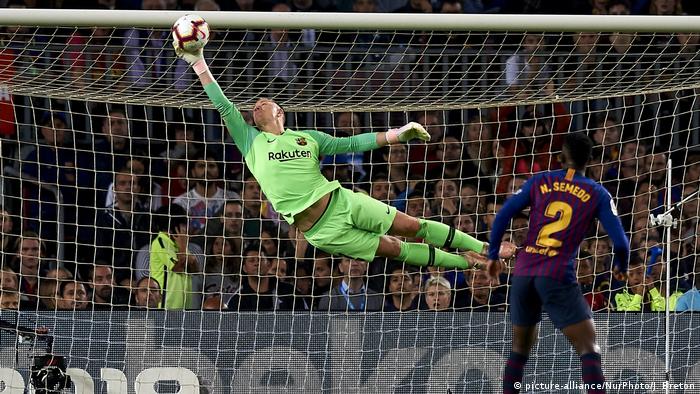 Leading into Barcelona's Clasico clash with Real Madrid in the Copa del Rey at the end of last month, Marc-Andre ter Stegen had already proven himself an indispensable cog in the Catalan machine.

But he further endeared himself to teammates and fans alike with yet another imperious display between the sticks to deny a rampant Real Madrid.

Ter Stegen had made three superb saves before Barcelona took a 50th-minute lead, but it was his stop from Sergio Reguilon at 1-0 which signaled his increasing importance. The Real left-back's diving header looked destined for the net, only for an incredible flying save from ter Stegen to intervene.

It was typical of ter Stegen's exceptional campaign and stood out thanks to the opposition. Real Madrid were dominant in the cup fixture and ter Stegen once again came to the aid of a defense that has been less than reliable this season. He also shut Madrid out in the league game that followed.

Cat-like reflexes, Inspector Gadget-esque limbs, and an ability to enlarge his body like an enraged Cobra make the 26-year-old incredibly tough to beat. Following that Copa del Rey victory, ter Stegen had kept out 47 of the last 55 shots he had faced.

Statistically, the Germany international rates as one of the world's best shot-stoppers among Europe's elite clubs, making an average of 2.6 saves per game ahead of last week's Champions League clash with Lyon. Only Manchester United's David de Gea boasts a better record with three saves every 90 minutes.

"The best goalkeeper in the world,” said teammate Sergi Roberto.

"His touch is much better (than mine),” claimed Lionel Messi himself.

Yet ter Stegen is still struggling to convince Germany coach Joachim Löw that he deserves the number one jersey ahead of teammate Manuel Neuer. Löw said last year that Neuer would be his first choice until Euro 2020, but has since reopened the door for the understudy.

"We are happy to have two world-class goalkeepers in Germany. I said last year that Neuer is the No.1, also because he is our captain,"  Löw said before his latest squad announcement.

"But this year we have a little restart and Marc will get his chances in the qualification for Euro 2020. Of course, there will be a battle.

Germany stalwarts Mats Hummels, Jerome Boateng, and Thomas Müller have already been cut adrift from Löw's plans, but Neuer, as Germany captain, looks set to hold on to Löw trust. For now, at least.

As Bayern Munich crashed out of the Champions League last week, Neuer was clearly at fault for the first goal. Rushing off his line and allowing Sadio Mane to embarrass him. It was a mistake which the Neuer of circa 2001-06 would never have made, when he was on top of his game and arguably the world's best having revolutionised the position as a "sweeper keeper".

There is little doubt Neuer is an icon as a gloveman, but all greats must fall and ter Stegen has shown he's the better keeper now in an outstanding season with Barcelona. And it's clear that he's tired of waiting in the wings.

"I have absolute respect for what Manu has done for the national team,” he told online broadcaster Dazn recently..

"But I will do everything to ensure that there's also a change in the goalkeeper position."

With Germany playing Serbia in a friendly match on Wednesday, it would be a perfect opportunity for Löw to hand Ter Stegen his 22nd cap. Shine, and Ter Stegen may give Löw no other choice but to make another huge change to a Germany side in desperate need of revival.

Joachim Löw defended his decision to omit Jerome Boateng, Mats Hummels and Thomas Müller from Germany's squad. The national coach has received a lot of backlash for the way he informed the trio. (15.03.2019)

In his bid to repair a damaged reputation, Germany coach Joachim Löw promised that "2019 would be a year of new beginnings." His latest squad selection reflects that statement, but which players will he build around? (15.03.2019)