Manny Pacquiao to run for Philippines' president in 2022

The former boxer and now senator has promised to tackle corruption and poverty. Despite his popularity, the nomination garnered a lukewarm reaction due to his past controversies and lack of political experience. 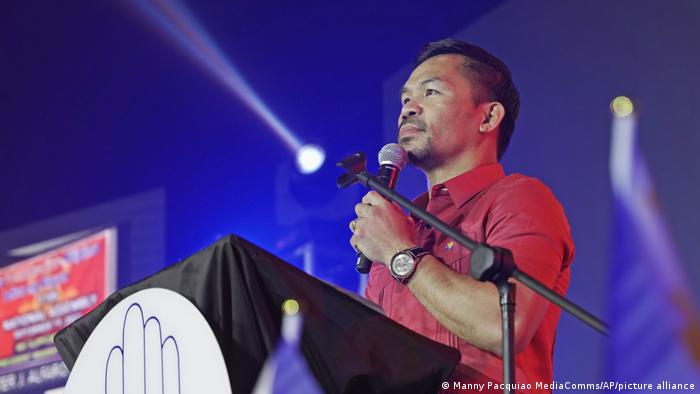 The eight-division world champion made the announcement just weeks after losing what could be his last professional fight, against Cuban Yordenis Ugas in Las Vegas

Boxing legend Manny Pacquiaoannounced on Monday that he would be running for president of the Philippines in 2022. Incumbent Rodrigo Duterte is barred from a second term by the country's constitution.

Pacquiao is currently a sitting senator with Duterte's center-left PDP-Laban party. He has promised to root out corruption and tackle poverty.

Answering questions about his perceived lack of experience,  Pacquiao pointed not only to his five years in the senate, but also to his humble roots that he claims help him better understand the country's poor.

Why is Pacquiao's nomination controversial?

Even setting aside his political experience, the former world champ's is littered with controversy. He was charged with tax evasion in 2013. He has also caused controversy with extreme homophobia, describing gay couples as "worse than animals."

Despite this, he has also publicly clashed with Duterte about corruption. His nomination for the presidential race came via an anti-Duterte faction of PDP-Laban.

Although both men are still highly regarded in sections of Philippine society, the reaction to Pacquiao's nomination was somewhat mixed from the public.