Malta's opposition Labour Party, led by Joseph Muscat, has won election for the first time in 15 years in the eurozone's smallest member. Outgoing premier Lawrence Gonzi has conceded defeat for his Nationalist Party. 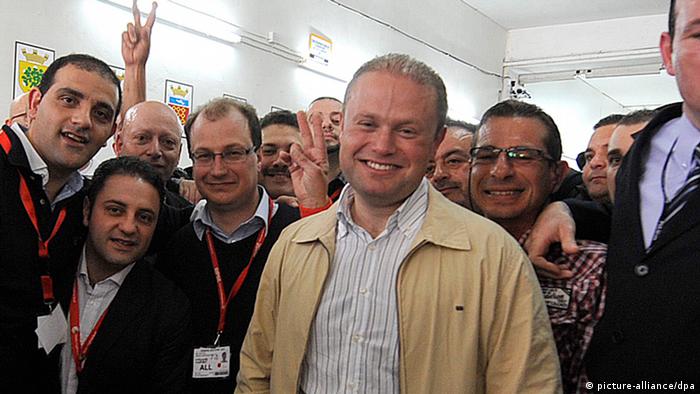 Early results from Saturday's Maltese general election showed the center-left Labour Party ahead with 55 percent, clearing the way for their biggest victory since the Mediterranean island nation obtained independence from Britain in 1964.

"I wasn't expecting such a landslide victory for Labour," said Muscat, a 39-year-old former journalist and former member of the European Parliament.

Prime Minister Lawrence Gonzi said he "took full responsibility" for the defeat. The projections showed his Nationalist Party trailing at 43 percent. Gonzi said he would relinquish the party leadership which he had held since 2004.

Former Maltese Prime Minister Dom Mintoff, who oversaw the country's transition through independence from Britain to a republic, has died aged 96. Mintoff was perhaps best known for his confrontational style. (21.08.2012)

He also campaigned for an end to the island's local parochialism, which he described as "tribal politics." He also called for an end to corruption and reduced prices for energy consumers. Malta, as a small island halfway between Italy and North Africa, is largely dependent on imported fuels.

Malta has hardly had a Labour government in 25 years, except for a 22-month stint when it governed between 1996 and 1998.

Gonzi was forced to call elections slightly ahead of schedule after one of the government's own lawmakers went against his party on a December budget vote, robbing it of its one-seat majority. Gonzi had argued that his government had protected the economy when other European countries were in dire straits.

Malta has a relatively low unemployment rate of 6 percent and clocked 1.5 percent economic growth last year - in contrast to struggling economies in other southern eurozone nations.