Malaysian PM ′likely to survive′ financial scandal | Asia| An in-depth look at news from across the continent | DW | 29.07.2015

Under mounting pressure over a scandal, Malaysian PM Najib Razak fired his deputy and the attorney general who had been investigating him. Is he attempting to cement his hold on power? DW speaks to analyst William Case. 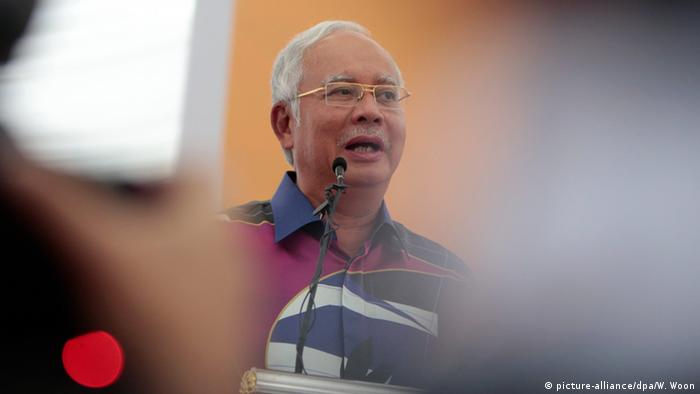 Premier Najib Razak sacked his deputy and four other ministers in a cabinet reshuffle on July 28 and replaced the attorney general in what many view as a bid to stifle questions over a graft scandal at debt-laden state investment fund 1MDB. Muhyiddin Yassin, who was Najib's deputy since 2009, was removed from office for publicly criticizing the government's efforts to handle a scandal related to 1MDB.

The PM, whose approval ratings have fallen sharply over the past year, has come under growing pressure in recent months over claims that $700 million (633 million euros) were wired from the state-owned development company, which he launched in 2009, to his personal accounts.

Citing documents from four ongoing official probes into 1MDB, news reports claimed that five deposits were made into Najib's account and the two largest transactions, worth $620 million and $61 million respectively, were made in March 2013 during a heated election campaign in Malaysia. The authorities are also looking into allegations that two million ringgit ($529,000) were deposited into his wife's accounts earlier this year.

In a DW interview, William Case, professor in the Department of Asian and International Studies at the City University of Hong Kong, says that while there is little doubt Najib removed his deputy because of his outspokenness over the 1MDB scandal, the PM will likely survive the current scandal so long as splits within the ruling coalition are avoided and the discontents of ordinary citizens are distracted. 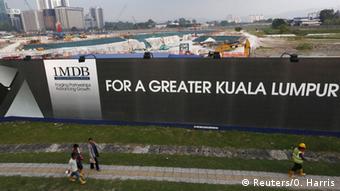 William Case: 'I do not think that Najib has been so pushed to a corner'

DW: In your view, why did PM Najib decide to sack his deputy and attorney general?

William Case: There is little doubt that Malaysian Prime Minister Najib Razak removed his deputy Muhyiddin Yassin and several other ministers and deputy ministers because of their outspokenness over the 1MDB scandal. Last Sunday, Muhyiddin also speculated at a United Malays National Organization (UMNO) party gathering that if the elections were held today, the Barisan Nasional government would likely lose.

Muhyiddin has also grown closer to Former Prime Minister Mahathir Mohamad, who has been demanding Najib's resignation for many months. In the face of criticisms over the scandal, Najib is insisting now on watertight loyalty within the cabinet (which he presents as "collective responsibility") and within the UMNO Supreme Council. For this reason, Muhyiddin will probably be removed at some point from his other top executive position, the UMNO deputy presidency.

As such, Gani has long been a mainstay in the establishment's first line of defense, tirelessly prosecuting UMNO's enemies, while ignoring most of UMNO's transgressions. Perhaps now, though, very late in his career, Gani has had a change of heart. He had been leading one of several investigations into the 1MDB affair. And in light of his discoveries, there are signs that he may have been contemplating bringing corruption charges against the prime minister.

So, rather than risk this, Najib ordered his sudden replacement.

However, unlike cabinet ministers and UMNO party officials, Gani held a public service appointment, raising questions over the legality of his removal. And the government's justification seems weak. It claimed that Gani was in ill health (though Gani appears quite dumbfounded over this) and that he was nearing the mandatory retirement age of 60 (albeit the government replaced him with a 65-year old judge, widely regarded as pliable, from the Federal Court).

But the moves touched off speculation that Najib was attempting to curb further calls for transparency. "The removal of the AG and the DPM will be seen as acts of desperation by Najib," Terence Gomez, a political analyst with the University of Malaya, was quoted as saying. What is your take on this?

Malaysian Prime Minister Najib Razak has sacked his deputy, four ministers and an attorney general investigating the premier for corruption. Critics have called the prime minister's reshuffle a "purge." (28.07.2015)

Malaysian PM Najib Razak has denied news reports stating that $700 million were wired to his personal account from a state investment fund. DW speaks to journalist Jahabar Sadiq about the implications of the scandal. (03.07.2015)

Why has Malaysia's opposition alliance collapsed?

Once seen as an alternative to the ruling coalition, Malaysia's opposition alliance has fallen apart. DW examines the reasons and implications of a development hastened by the jailing of charismatic leader Anwar Ibrahim. (18.06.2015)

I agree with this statement but do not think that Najib has been so pushed to a corner that his response strategies can yet be called "desperation." Rivalries between prime ministers and their deputies, purges of cabinet members and top bureaucratic and UMNO officials, ousting judges, shutting down independent newspapers, systematic harassment of dissidents, mass detentions under the Sedition Law (or other security legislation), defamation suits leading to bankruptcy, and trumped up charges and jailings are all well-established elite-level strategies in the conduct of Malaysian politics.

Indeed, they were taken to new levels and practiced with great ruthlessness by Former Prime Minister Mahathir during his long tenure. The strategies adopted by Najib are thus, in most regards, typical of those to which prime ministers resort in Malaysia when confronted by the leadership challenges or epic scandals that so frequently erupt in Malaysia.

The only thing new, perhaps, is the suspension of a news portal (The Edge Financial Daily) - a seeming violation of a pledge to foreign investors, made by Mahathir, that the internet in Malaysia would never be censored (though critical news portals and dissident bloggers have been harassed and intimidated in the past).

Many analysts say Malaysians want to get to the bottom of the issue and that the questions surrounding the scandal simply won't go away. Is the PM only buying time and holding on to power with the recent sackings?

Scandals involving market manipulations, money politics, failed projects, poor stewardship of taxpayers' money, and outright theft have been so common in Malaysia that much of the country's urban middle class, having grown quite cynical, is inured. Hence, they generally profess little understanding of, or interest in, the intricacies of the 1MDB affair. They are far more irritated by the recent introduction of a GST. Even so, this particular scandal is more challenging than other scandals. For the first time, reporters appear to have been able to track money transfers directly to the prime minister's personal bank accounts (and those of his wife's).

A wave of public astonishment followed (not least over the apparent carelessness of the prime minister in failing to conceal his finances). But though public curiosity lingers, outrage has probably peaked. With investigations mounted by the Attorney-General, the special Task Force and the Parliamentary Accounts Committee now having been thrown into disarray, few Malaysians expect that the truth will ever be known. Rather, the scandal will go the way of earlier ones, leaving scars, but with the incumbent prime minister still in power. 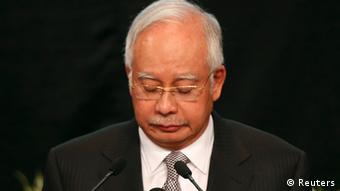 Critics slammed the sackings, calling it a 'purge'

What has the PM done so far to fight off the allegations?

When the scandal first broke, Najib seemed flatfooted. He never really denied that the transfers to his accounts had taken place, only that he never used them in any personal way (which may mostly be true - much of the funding was apparently used to help finance Barisan's very difficult election campaign in 2013). But as the weeks have passed, Najib has recovered.

Government officials have successfully sown confusion over the nature of the accounts, the sources of funding, and the veracity of documents. In this, they have been inadvertently aided by critical media outlets which, in their extensive reporting, have produced a very complicated roster of personalities, investment partners, and subsidiary companies in multiple countries. In addition, the police seem keener to identify and arrest leakers and whistleblowers than miscreants.

The Wall Street Journal and Sarawak Report, which broke the story, have been besmirched as nefarious "foreign" agents. Dissident bloggers have been threatened and critical news portals silenced. So too has Mahathir, it seems, for he has been prevented by the police from speaking at public events. And his often venomous blog has gone dead. "Disloyal" ministers have been purged from the cabinet. The sundry investigations of 1MDB's dealings will now be dragged out or derailed. In addition, UMNO's cadres, the party's 190 or so division leaders, have mostly declared their support for Najib.

The push to oust the Najib has been led by former prime minister Mahathir Mohamad, who has warned that the political coalition dominated by the ruling UMNO will lose power in the next polls unless he is replaced. How difficult has the situation become for Najib to hold on to power?

Mahathir has certainly been vocal in his insistence that Najib resign. But Mahathir's relations with most all his deputies or successors have been fraught. Mahathir ousted three deputy prime ministers, with the popular Anwar Ibrahim even beaten by police and given a long prison sentence. Mahathir then hounded his handpicked successor, Abdullah Badawi, helping driving Mahathir from office.

His attacks on Najib are thus in character - and may even be doing his own reputation - founded on Malaysia's rapid industrialization during his tenure, much damage. We are reminded now of the extensive corruption and repression that also characterized his tenure.

But is Mahathir right that Barisan will lose the next general election? Much depends on the country's economy over the next few years. If it prospers, or even muddles through, as seems more likely, 1MDB and the scandals to come will be overlooked. But as we saw in the last general election in May 2013, even when Barisan loses its popular majority it retains its majority in parliament. UMNO can thus rely on its practiced menu of electoral manipulations, overseen by a subservient Election Commission, as well as its extensive patronage resources to return it to office. 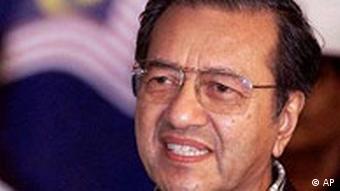 William Case: 'Mahathir has been vocal in his insistence that Najib resign'

What does this scandal reveal about the current state of politics in Malaysia, and is it likely to have any repercussions on the country's image?

Of course, Malaysia's standing is suffering internationally, and doubts do remain over the country's medium- and long-term economic fortunes. But Malaysia's reputation has been seriously buffeted before: Anwar's black eye; controls on remittances of capital gains at the time of the financial crisis in 1998; the Scorpene submarine procurement scandal; the horrific murder of Altantuya Shaaribu; and the Port Klang Free Zone ‘fiasco'. Yet, it has recovered each time.

Today, Malaysia is courted as a prospective member of the Trans Pacific Partnership and its officials are celebrating the country's improved evaluation over human trafficking by the US government. Further, with respect to the economy, Malaysia will likely continue to perform better than most other middle-income countries.

Within its highly politicized bureaucracy there remain islands of technocratic expertise even if observers fret at the moment over the fate of Bank Negara, the country's esteemed central bank and its governor. What must be remembered is that after Singapore, Malaysia has long been regarded as the most stable and developed country within the Southeast Asian region, notwithstanding its many scandals.

William Case is professor in the Department of Asian and International Studies at the City University of Hong Kong.