Magellan and the world's first circumnavigation

Portuguese explorer Ferdinand Magellan died before his fleet completed the first circumnavigation of the Earth 500 years ago, on September 6, 1522. 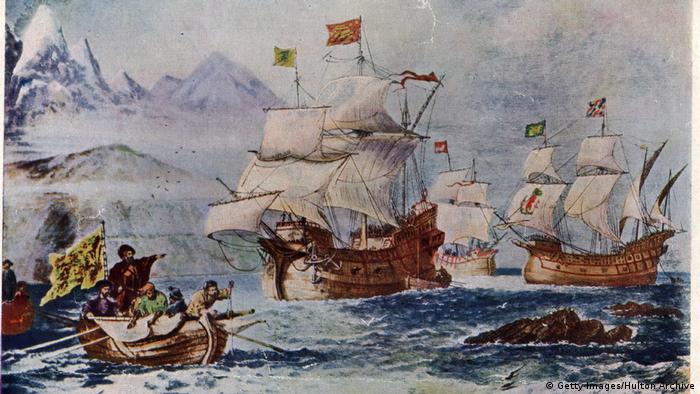 The first circumnavigation of the world was unwittingly initiated by Ferdinand Magellan. He however died before the historical feat was achieved 500 years ago, on September 6, 1522.

A battle-hardened knight and hardy sailor at a young age, Magellan never would have imagined he would be the one to make the key contribution to travelling around the globe.

Born about 1480 in Portugal into a Catholic family of minor nobility, Magellan was influenced by the confining religious ideology of the late Middle Ages and the idea of subjecting the world to Christianity.

The era was marked by the epochal shift from the Middle Ages to modern times.

In 1492, Christopher Columbus had sailed to America, which inspired other seafarers to go on ever more daring voyages of discovery seeking new lands and fabulous wealth.

The beginning of the colonial era came at just the right time for Magellan, a daredevil who had distinguished himself during military missions at a young age — hoping, experts believe, to rise to the ranks of the upper nobility.

He traveled to India or the Malay Peninsula for the first time on board Portuguese spice and war ships. For a total of eight years, he fought on colonial battlegrounds in Asia and North Africa. 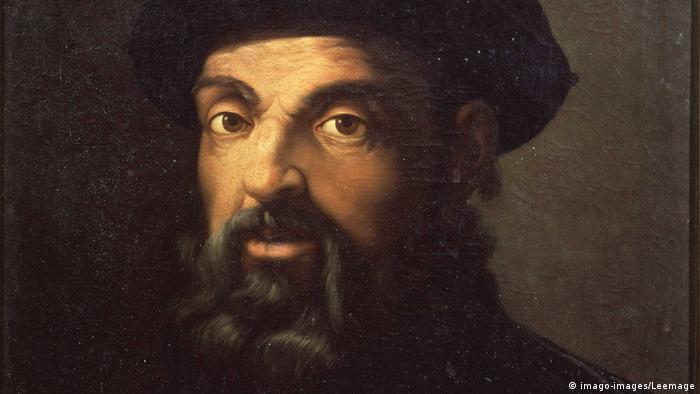 In 1512, he and a group of mariners headed to the legendary Spice Islands, also called the Maluku Islands or the Moluccas, in Southeast Asia — islands that are home to the nutmeg tree and above all the clove tree. On the European markets, these precious exotic flavor enhancers were worth their weight in gold.

Magellan's share in the sale of the spices after the crew's return home secured his livelihood, but it also awakened the desire for more.

After a quarrel with the Portuguese king, Ferdinand Magellan in 1517 changed his allegiance over to Spain, to King Charles I, the future Emperor Charles V of the Holy Roman Empire.

Bartolome de Las Casas, a Spanish theologian and writer of the time, described Magellan as small and rather unassuming — but exceptionally charismatic. "When it came down to it, he was a brilliant salesman and self-promoter who was able to inspire people with his ideas and great goals," German historian Christian Jostmann told DW, adding it was no surprise that Magellan managed to convince the Spanish king to shell out the money for a trip to the Moluccas. 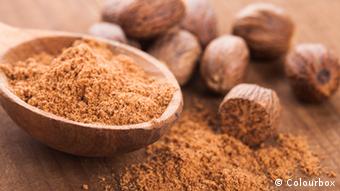 Nutmeg was once worth more than its weight in gold

Prospects of great wealth are one thing, but Charles I also agreed because he had an eye on power politics. At the beginning of the 16th century, Spain and Portugal had split up the world among themselves, with ownership of the Spice Islands, which today belong to Indonesia, still up in the air.

Magellan could not sail around the Cape of Good Hope at the southern tip of Africa because the route was blocked by the Portuguese. To avoid Portuguese territories altogether, Magellan vowed to find a western sea route to the Moluccas. Since Columbus' sea journey, about 500 ships had tried in vain to find a passage through the American land mass.

Magellan's Moluccan Armada of five completely overhauled ships equipped with cannons left Seville on August 10, 1519 — headed for Sanlucar de Barrameda on the Atlantic coast. The fleet with its crew of 240 set sail again from there about a month later.

'Life in a wooden tub'

Magellan aimed to become rich, found colonies for Spain and convert the natives, all while keeping in mind the prospect of social advancement, said Jostmann. In his book "Magellan or The First Circumnavigation of the Earth," the historian vividly describes what Magellan and his companions experienced on this first travel around the world, including stormy and calm seas, hunger, thirst, diseases, mutinies and deadly conflicts with indigenous peoples. 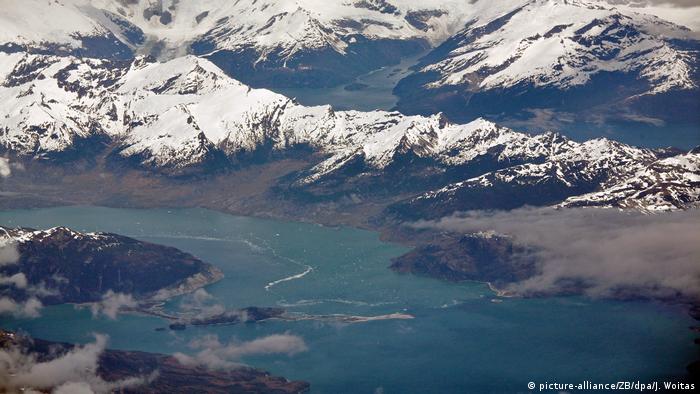 The Strait of Magellan

It was far from a seafaring idyll, Jostmann said. "About 50 men lived for months in a wooden tub measuring about 150 square meters with no sanitary facilities, no kitchen, no privacy." The food was modest, there was hardly any medical care, and then there was always the insecurity of this being a suicide mission, he added.

The fleet sailed to the Canary Islands, then along the African coast to Sierra Leone. At the narrowest point, it crossed the Atlantic Ocean and reached the South American continent along the area that today is Rio de Janeiro.

The journey continued along the South American east coast, with the men constantly on the lookout for the hypothetical passage to the west. It was all very tedious, and the fleet stopped en route in the winter months. The supply situation was increasingly difficult and the mood on board the ships soured, leading to a mutiny.

Sea passage to the west

Magellan, however, proved to be tenacious.

On October 21, 1520, he discovered a cape. His fleet sailed between the southern tip of the South American continent and the island of Tierra del Fuego, into a labyrinth of waterways, losing one ship on the way while another ship took advantage of the confusion and fled back to Spain. But Magellan had found the longed-for passage in these storm-battered waters. It took the decimated armada six weeks to reach the Pacific Ocean. 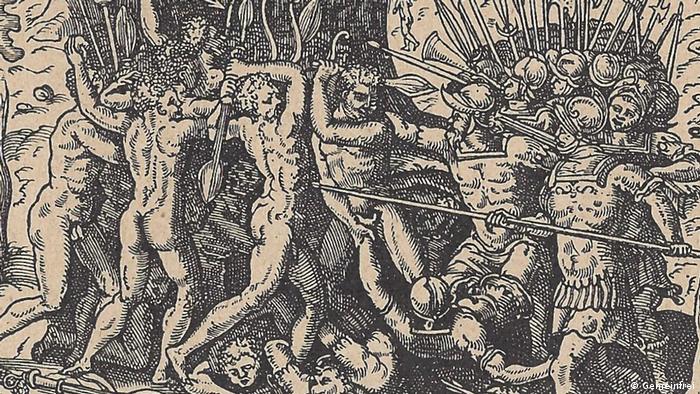 A woodcut shows Magellan's fate at the hands of the natives

From the southeast of the Pacific Ocean, they continued in a northwesterly arc for three and a half months without once encountering inhabited islands. Hunger, thirst and illness claimed 19 lives before the crews found fresh provisions on one of the Mariana Islands — a tragedy because unwittingly, Magellan's ships had passed by many islands that could have provided him and his crew with fresh water and food.

Finally, the three remaining ships and their 150-strong crew landed in the Philippines on March 21, 1521 as the first Europeans there ever. It was Magellan's final destination. He planned to take possession of these rich islands for Spain, with an eye on a possible governorship.

"When he arrived in the Philippines, he pulled off such a crazy show that large numbers of natives converted to Christianity and capitulated to Spain," according to Jostmann.

Others were not swayed, and when Magellan tried to conquer a village in April 1521, he was killed by spears and a poison arrows. Lacking sufficient sailors for three ships, two vessels quickly fled after the crews sank the third.

Under the command of Juan Sebastian Elcano, the two ships sailed to the Spice Islands, where they finally took the long-desired cargo on board. Elcano chose the route around the Cape of Good Hope for the return trip. 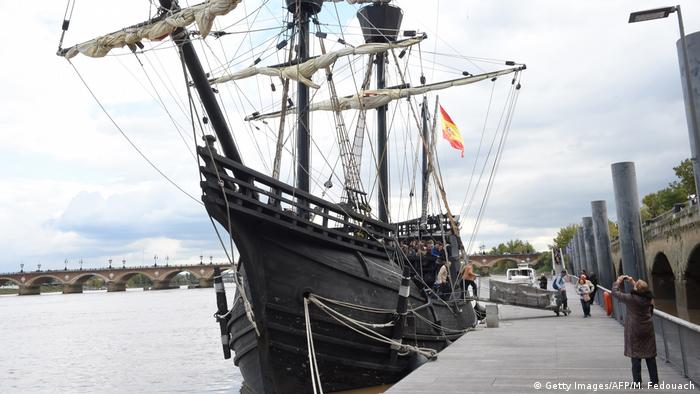 A replica of the Victoria, the only ship from Magellan's fleet that made it back home

In the end, almost three years after setting sail for the Moluccas, only one of the five ships returned home, with Captain Elcano completing Magellan's involuntary and unplanned circumnavigation of the world.

On September 6, 1522, the Victoria reached the Spanish port of Sanlucar de Barrameda. About 20 sailors survived the first historically documented circumnavigation of the world. Since the middle of the 16th century, the western passage has been named Strait of Magellan after Ferdinand Magellan.

In the 19th century, many intellectuals celebrated Magellan as a hero and genius, a view that's outdated now with our perspective on colonialism, said Christian Jostmann. You have to admire the explorer's ambition, tenacity and sheer will power, he added, but for the historian, that's not a reason to celebrate him.

This article was originally written in German. It was first published on April 27, 2021, 500 years after Magellan's death. It is now republished to mark the date the circumnavigation was completed.

2022 marks the 500th anniversary of Magellan's circumnavigation of the globe. It was a turning point in history: an incredible three-year voyage that ushered in a new age.

Portugal confronts its role in the trans-Atlantic slave trade 24.03.2021

As the world marks the International Day of Remembrance of the Victims of Slavery, more and more Portuguese with African roots are calling for a critical reappraisal of this dark chapter in history.