Madonna's "Confessions" tour comes to Germany this weekend with thousands of adoring fans expected. Other interested parties, such as German prosecutors, will be there, too -- for business, not pleasure. 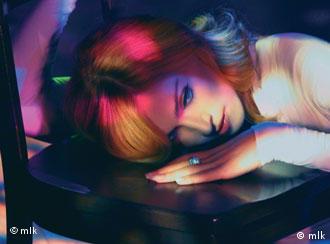 Madonna takes a breather from being controversial

Madonna's "Confessions" tour rolls into Germany this weekend and while any performance by the original "Material Girl" going through her back catalogue of global hits is enough to attract widespread attention, her current sojourn through the stadiums of the world is prompting more than the average.

That's what prosecutors in Germany are intending to find out when Madonna comes to town to play Düsseldorf on Sunday. Controversy over a mock crucifixion during the concert has dogged the tour so far, and the German regulators will be watching in an attempt to determine whether the scene could be construed as insulting religious beliefs.

Nailed on a "disco cross" 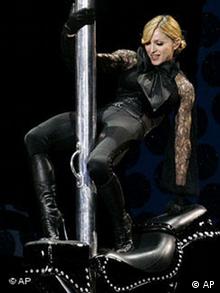 Madonna pole-dancing in a skin-tight catsuit: A less provocative scene from her current show

During the offensive section, Madonna is hoisted onto what can be loosely termed a "disco cross" while wearing a crown of thorns. The mock crucifixion has caused outrage in many of the countries in which the singer has performed during the tour to date.

The Vatican is especially upset. Cardinal Ersilio Tonino, speaking with the approval of the pope, recently called the concert "a blasphemous challenge to the faith" and a "profanation of the cross" after Madonna had played Rome. He also called for Madonna, who was raised as a Catholic, to be excommunicated.

"It is disrespectful, in bad taste and provocative," added Father Manfredo Leone from Rome's Santa Maria Liberatrice church. "Being raised on a cross with a crown of thorns like a modern Christ is absurd. Doing it in the cradle of Christianity comes close to blasphemy."

The scene has also offended Jewish and Muslim leaders.

"It is an idea in the worst possible taste and she would be better to return home," suggested Mario Scajola, head of the Italian Muslim League, after the Rome show.

Russia's Orthodox Church accused Madonna of exploiting Christian symbols for her own ends and called for a boycott of her first-ever concert in Moscow, when she played there earlier this month.

"The US singer Madonna exploits Christian symbols -- the cross, rosary beads and the crucifix -- and tries to equate human passions, including her own personal passions, with something sacred," the spokesman for the patriarch of Moscow said in a statement.

Not disrespectful to church...but world leaders? 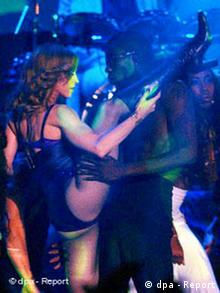 Few moms can pull this off

The singer's spokeswoman, Liz Rosenberg, issued a statement in defense of the singer, denying that the star's show was insulting. "The context of Madonna's performance on the crucifix is neither negative nor disrespectful toward the church," she said.

The German authorities will make up their own minds on the crucifixion matter this weekend and also on whether the giant screen, which flashes images ranging from the pope, Osama Bin Laden, US President George W. Bush, Chinese leader Mao Zedong to Italian fascist dictator Benito Mussolini, is in bad taste.

Some Muslim leaders have urged Europe to use blasphemy laws against newspapers that publish cartoons containing representations of the Prophet Mohammed. Here's a look at the differing laws in European countries. (Feb. 7, 2006)