Conservative candidate Francois Fillon has been left fighting to save his presidential candidacy following new revelations over his wife's job. Current opinion polls have put independent Emmanuel Macron at 64 percent. 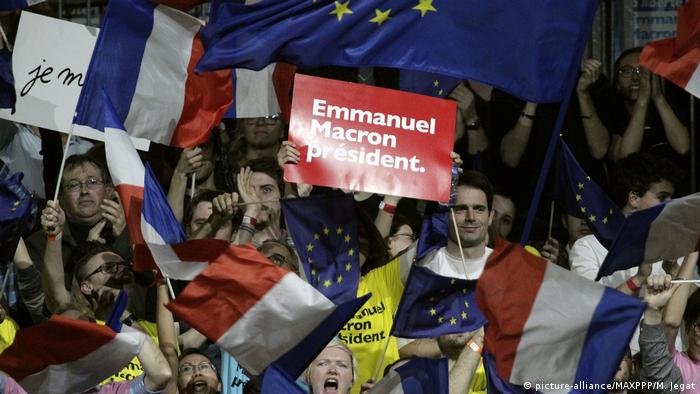 Never one to shy from a political scandal, France wandered further down a rumor-filled election road on Tuesday as scandal-hit Conservative candidate Francois Fillon was placed at 18.5 percent in a second-round opinion poll, propelling independent frontrunner Emmanuel Macron still further ahead.

According to a rolling opinion poll by the IFOP, Macron would win the May 7 run-off with 64 percent. French far-right leader Marine Le Pen also came out ahead of Fillon with almost double the votes at 36 percent.

Fillon's hopes of entering the Élysée Palace have been fading fast since it emerged that his British-born spouse Penelope was paid hundreds of thousands of euros for a suspected "fake job."

Hoping to put the scandal behind him, the conservative admitted on Monday that he had made an "error." On Tuesday, however, the Canard Enchaîné newspaper, which was behind the original revelations, published new claims that could further hinder Fillon's candidacy.

The paper also reported that investigators probing the possible misuse of public funds had been unable to find "the slightest trace of Penelope's 15 years of work."

Fillon has questioned the validity of the investigation, saying it violates the principle of separation of powers between the judiciary and the legislature.

Frontrunner Macron meanwhile laughed off rumors late on Monday that he was having a gay relationship with Radio France chief executive Mathieu Gallet, outside his marriage to his former teacher Brigitte Trogneux.

"If you're told I lead a double life with Mr Gallet, it's because my hologram has escaped," the former economy minister told supporters.

A spokeswoman said the comments were "a clear denial of the rumors about his private life."