Macedonian police have charged the leader of the opposition for allegedly conspiring with a foreign spy agency to overthrow the government. His arrest could further deepen political divisions in the Balkan nation. 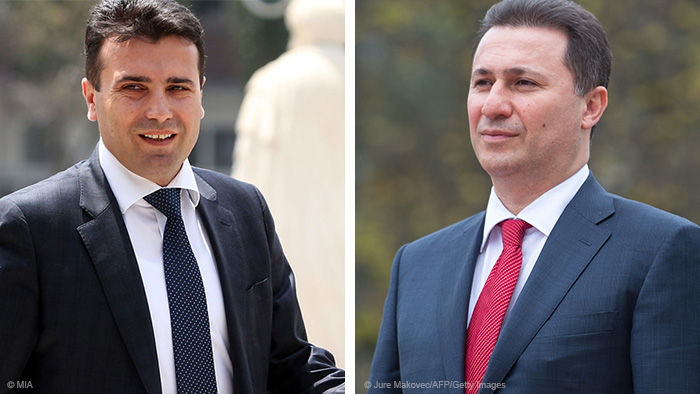 Criminal charges were lodged against Social-Democrat leader Zoran Zaev (pictured left) and three of his alleged accomplices on Saturday.

The suspected conspirators are accused of taking part in a plot to gather intelligence against the government, and blackmail Prime Minister Nikola Gruevski (pictured right) to dissolve his cabinet and call a snap election.

"For the first time since independence, the Ministry of Interior has realized a case in which we have stopped an attempt to threaten the constitutional order - the undemocratic seizure of power," Interior Ministry spokesman Ivo Kotevski told reporters in the capital, Skopje.

Zaev has denied the charges. He says authorities are moving against him to prevent the publication of what he's described as incendiary evidence of criminal wrongdoing by Gruevski's conservative government that could harm ethnic relations in the country.

Gruevski, on the other hand, says Zaev tried to blackmail him to call a snap election during a series of face-to-face meetings between the pair toward the end of last year. He said Zaev claimed to have gathered intelligence against the government with the help of a foreign spy service.

"I watched and listened to the head of the opposition ...informing me that he is collaborating with a foreign intelligence service," Gruevski said.

Of the four individuals alleged to have been involved in the plot - including a former head of state intelligence and his wife - all except Zaev are in police custody. However, local media reported Zaev had turned his passport in to authorities.

Gruevski has served as Macedonia's prime minister since mid-2006 and has led the ruling conservative VMRO DPMNE party since 2003. Zaev's Social-Democrats are their main rivals.

After the last parliamentary elections in March, the Social-Democrats accused the government of fraud, and have boycotted parliament ever since. The prospect of Zaev serving jail time could potentially worsen political divisions in the former Yugoslav republic.

Macedonia came close to civil war in 2001, when clashes broke out between government forces and ethnic Albanian guerillas. Ethnic Albanians make up about a quarter of the country's 2 million people.

The country's aspirations of joining the European Union and NATO have been stalled by an ongoing dispute with Greece over Macedonia's name.

Macedonia plans to punish Roma who seek to apply for asylum in the EU. Behind this curb on freedom of travel are warnings from Brussels threatening Skopje's EU aspirations. (08.04.2012)