Lost in transition: Africans in Georgia

The former Soviet republic of Georgia has been a bridge from east to west. Recently, migrants from Africa hope to find better lives there or to transit to Western Europe. But they face many challenges in the country. 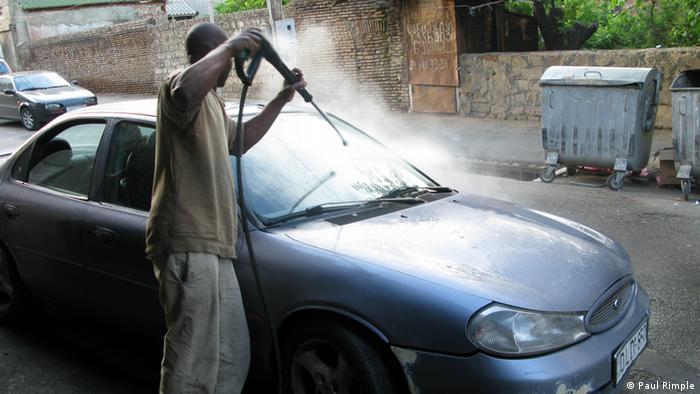 Nigerian national Sylvester Jideofor Chinyelugo works at a neighborhood car wash around the corner from a cramped, one-room apartment he rents in the Georgian capital, Tbilisi. The few hundred dollars a month he earns support his wife Linda, from Cameroon, and their baby daughter Adore, who was born in Tbilisi. They are among a small but growing number of Africans who decided to try their luck in this former Soviet republic. It's a venture where the odds are stacked against them. 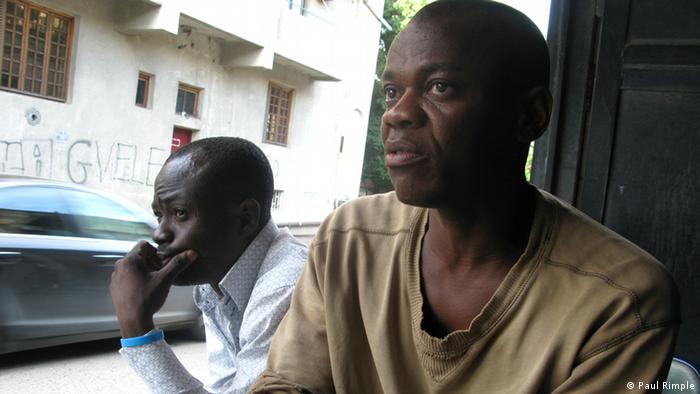 Georgia's official unemployment rate is 16 percent, although unofficial estimates put the number as high as 70 percent. Nevertheless, Chinyelugo said he is undaunted. A graduate of Tbilisi State Universit, with a master's in European Studies, the former kickboxer quickly learned Georgian and found a job as he prepares for a PhD.

“I like the political atmosphere in Georgia. It is much better than I've seen in many areas. That is personally why I decided to stay,” Chinyelugo said.

A springboard to Europe

The number of Africans coming to Georgia has risen steadily over the past five years. Georgian Ministry of Internal Affairs statistics revealed that in 2011, nearly 5,000 Africans entered Georgia and about 4,500 left; a net increase of 1,000 more entries than exits from the previous year. However, it is impossible to discern how many Africans are actually living in Georgia based on this data. Some apply for residence permits, while others renew their tourist visas.

Unlike many Chinese or Turkish migrants, who are brought to Georgia as part of a foreign contractor's labor force, Africans coming to Georgia see it as a springboard to Europe, are attracted by its affordable education or enticed by the ease of setting up businesses.

“There's an increase in Africans looking for opportunities. We have a simple taxation system and almost no corruption,” said First Deputy Minister of the Ministry of Internal Affairs Ektarine Zguladze. 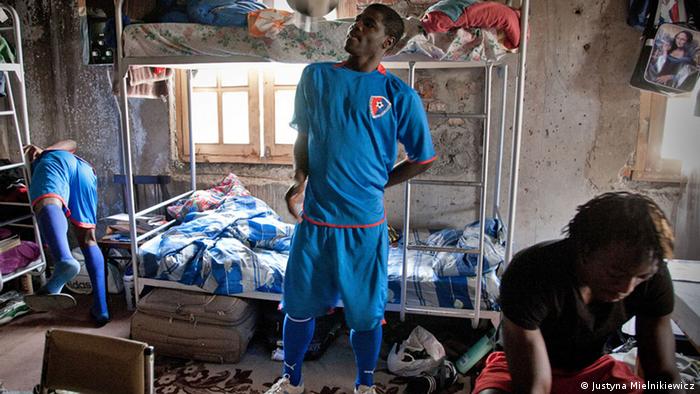 Georgia's relaxed visa requirements mean nearly anybody can enter at the border. Marc Hulst, program coordinator at the Georgian mission for the International Organization of Migration, said he believes this can be deceiving for those who intend to continue on to Europe.

“Entry into Georgia is not a problem, but the actual departure is not easy because border checks upon exit are pretty strict. People often are mistaken in that; so, they end up stranded, or end up in prison trying to leave the country illegally,” said Hulst.

Con artists have been quick to exploit this vulnerability. So-called agents in home countries advertise placements at various schools in Georgia with the assurance of work. These are often unaccredited vocational schools claiming to specialize in fields like tourism and hotel management, which are taught in English. In the worst cases, people arrive to Georgia and discover the school they paid so much money to attend does not even exist. 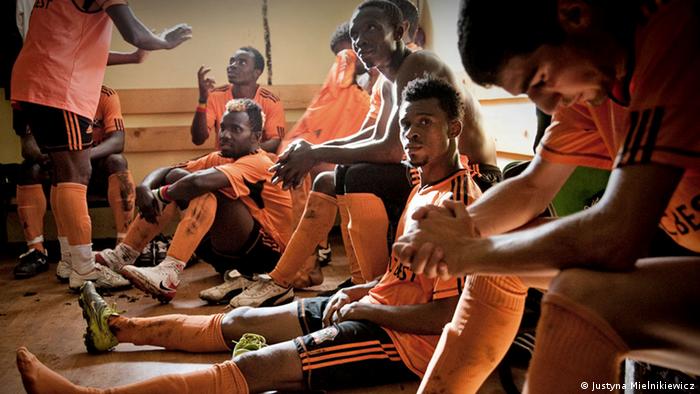 Nigerian student Joshua Ugochukusu and two friends paid an agent in Lagos $550 (440 euros) to arrange his placement in a Tbilisi school for a six-month course in tourism management. He wired $1,000 to Georgia and paid another $1,000 upon arrival in June 2011. One week, later the director brought them to an empty classroom furnished with six desks. There was one teacher.

“We understood there was no school of hotel management and complained. After some time, he took us to a cosmetology school where we took a -month course and got a certificate,” Ugochukusu said.

Another scam preys on young African soccer players dreaming of a shot in European leagues. One case involves 10 players from Cameroon, who over the past year, were lured by Cameroonian agents to play for FC Elit, a team in Georgia they were led to believe was a professional club. 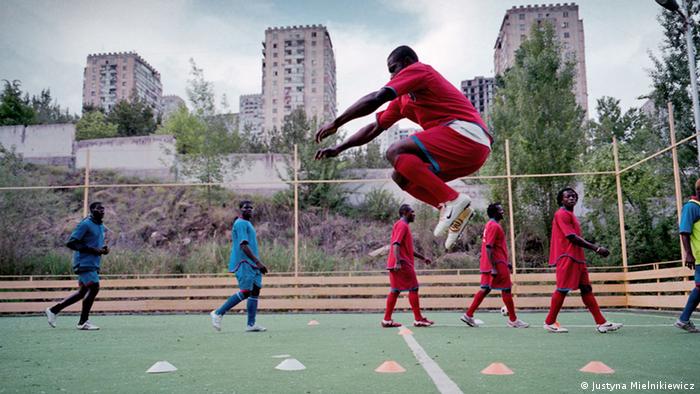 “When we looked on the Internet we saw that there were good clubs that play in the European league. But when we got here we saw it was a different thing,” recalled Clovis Nduta, who was one of the first players to arrive last August.

The players said they paid up to $2,500 for the chance to play professional soccer in Georgia. They were housed in an unheated refugee squat where they spent the coldest Tbilisi winter in a decade with little more than bread to eat. The club owner cajoled some into paying an additional $1,000 or more, presumably, to register the team. He asked them to help recruit more players from Cameroon, offering a 50 percent take. Since arrival, they have played very little soccer and depend on the few dollars their families can afford to wire to Georgia for survival.

According to the Georgian Football Federation (GFF), FC Elit was registered as an amateur team, but lost its spot for failing to pay the 2,000 lari ($1,200) registration fee.

Other African players in Tbilisi told similar stories. Irakli Nakaidze, head of the GFF transfer department, asserted that the federation bears no responsibility in such cases. “The problem is players agree to come for a low salary. It's an opportunity,” he said. “I can't imagine what it's like in their own country.” 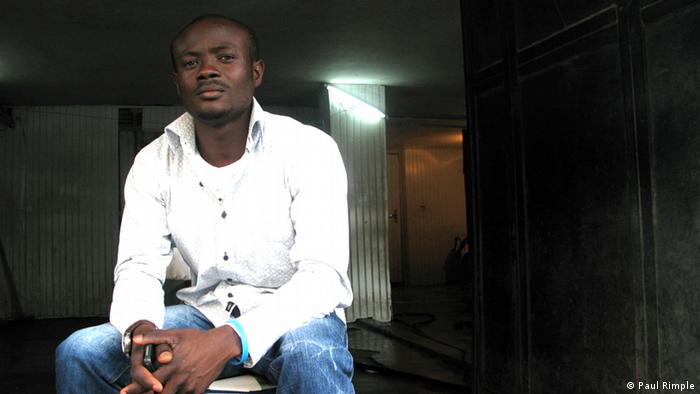 Where to go from here? Africans in Georgia

Zguladze said cases like Ugochukusu's have diminished in number since the ministry began scrutinizing visa applications from African travel agents for study at Georgian vocational schools. So far, there has been no crackdown on football fraud, although this could change as Georgia intends to bid to host the European championships in 2020.

Con victims have said returning home would be humiliating since their families made many sacrifices to pay the fees to get them to Georgia. Faced with a language barrier, an inherent mistrust of authorities and no embassies, many Africans end up at Sylvester Chinyelugo's carwash at some point, where between vacuums and washes he functions as a mentor to wayward Africans, providing counsel and consolation.

“The problem is people come here expecting to go to America,” he said while soaping down a black Mercedes. “They don't know what they are doing, or where they are.”

The International Organization for Migration (IOM) has said it is impossible to meet a deadline to transport thousands of South Sudanese refugees stranded on the Sudan border to South Sudan. (01.05.2012)

A Swiss decision to re-impose quotas on workers from eastern European EU states angered politicians in Brussels who called the move discriminatory. The Swiss justice minister said her country needed to limit immigration. (22.04.2012)

As elections approach in Greece, politicians argue that immigrants are behind higher crime rates and public health problems. But rights groups say the campaign rhetoric is a cheap ploy to win votes. (12.04.2012)

Listen to the report on Africans stuck in Georgia