Longest and deepest subsea power cable to be connected between Cyprus, Greece, and Israel | News | DW | 08.03.2021 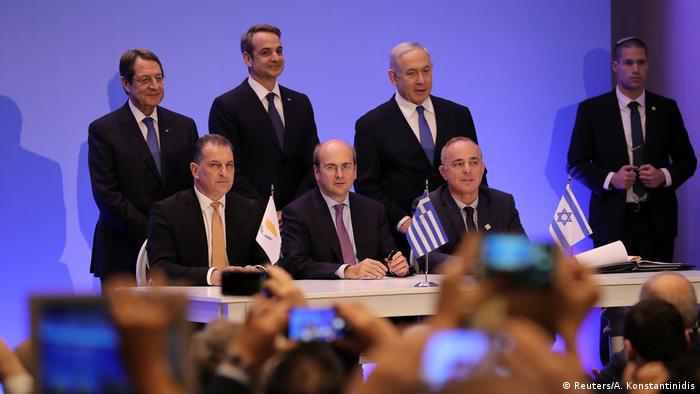 Cyprus, Greece, and Israel have formed an energy alliance

Cyprus, Greece, and Israel pledged on Monday to build the world's longest undersea power cable and link their electricity grids.
The €760 million ($900 million) Euro-Asia interconnector project —  partly financed by the European Union  — should connect Cyprus into the European power network for the first time, as well as Israel.

The "project of common interests" should help integrate renewable sources, and increase energy independence and interconnection, said the three energy ministers from each country.

How do they benefit?

Each country benefits from the 2,000 megawatt highway. The agreement marked a "decisive step towards ending the island's energy isolation, and consequently, our dependence on heavy fuels," said Cypriot Energy Minister Natasa Pilides.

The island is the only non-interconnected EU member state.

Israel sees the cable as a back-up power source. It would allow Israel "to receive electricity backing from the power grids of the European continent in times of emergency", said Israeli Energy Minister Yuval Steinitz.

In addition to the cable, the three countries have forced a regional energy alliance which also aims to explore and exploit natural gas resources.

The cable will cover three sections of the Mediterranean. The longest section would be between Cyprus and the Greek island of Crete at about 900 kilometers (560 miles). The sections between Israel to Cyprus and Crete to mainland Greece would be about 310 kilometers in length.

According to the Israel's Energy Ministry, the subsea electricity cable would be the longest and deepest to ever be constructed,   with a length of 1,500 km (930 miles)  and a maximum depth of 2,700 meters.

Parts of the cable are already under construction. The Greek power grid operator IPTO started construction between the Greek island of Crete and Greece's mainland. The section is expected to be finished by 2023.

The entire cable will be completed and connected by 2024 and operational by 2025, said Israel's energy ministry.

Germany and neighbors plan to build a green energy network, acording to a newspaper report. High-voltage underwater cables could connect wind, wave, water and solar power suppliers across a large part of Europe.