UK police have arrested a sixth suspect in relation to last week's London subway attack at Parsons Green. Police have said they are continuing their search at another five addresses. 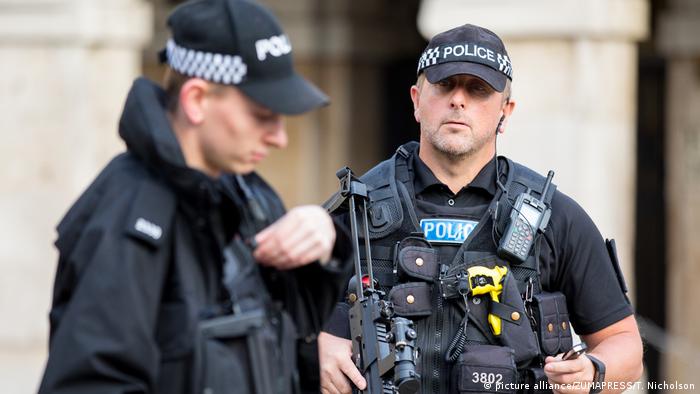 British counter-terror police on Thursday morning confirmed that they had arrested a 17-year-old boy in Thornton Heath, south London.

"We now have six males in custody and searches are continuing at five addresses," Dean Haydon, head of counter-terrorism for the Metropolitan Police, said.

The sixth arrest came after authorities early on Wednesday detained two further suspects, a 48-year-old man and a 30-year-old man, in the Welsh city of Newport. Both were arrested under the Terrorism Act; neither was immediately charged.

This followed another arrest, which was the third since last Friday's attack, on Tuesday, also in Newport. That suspect was a 35-year-old man, according to a statement from London's Metropolitan Police.

Fresh leads in the investigation into the bombing, which injured 30 people, have also prompted a series of property searches and other enquiries around the country.

"We anticipate that the searches will take some days to complete and may cause further disruption," said Dean Haydon, head of the Metropolitan Police Counter Terrorism Command.

First collars at the weekend

Two men - an 18-year-old refugee from Iraq and a 21-year-old from Syria - were arrested in England on Saturday and are still in custody.

The so-called "Islamic State" has claimed responsibility, but authorities have not found evidence that the attack was ordered or organized by the militant group.

A bucket packed with homemade explosives and nails partially detonated on a crowded train at the Parsons Green station on Friday, injuring 30 people, mostly with burns.

The terror threat level in the UK  was raised to its maximum level after the attack, but was downgraded to severe on Sunday after the first two arrests.

"This continues to be a fast-moving investigation. A significant amount of activity has taken place since the attack on Friday," said Dean Haydon, the Metropolitan Police's head of counterterrorism command. "Detectives are carrying out extensive inquiries to determine the full facts behind the attack."

Security camera footage published by British media on Sunday showed a man carrying a bag similar to the one containing the explosive device in Sunbury, west of London, a location later raided by police.