Local builders risk losing out in Afghanistan′s Helmand province | World | Breaking news and perspectives from around the globe | DW | 16.10.2010

US Marines and local businessmen are laying down the foundations for reconstruction in one of the Taliban's biggest strongholds in Afghanistan. But Helmand is likely to remain a place where many die and a few get rich. 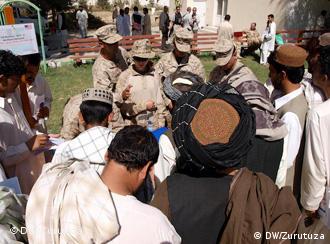 "We know that gifts are part of Afghan culture but we can not accept them, nor issue a contract for simple friendship." US Marines Captain Lambert is crystal clear about this. In front of him, 200 Pashtun businessmen applaud after listening to the regiment's interpreter's translation into Dari.

"We want the reconstruction money to stay here so we count on you, businessmen and businesswomen from Helmand," adds the US soldier, despite the total absence of women in the room. Captain Lambert's martial silhouette blackens against the Power Point presentation. "Professionalism," "mutual respect," "honesty"...can be read on the slide behind him - "essential" work parameters for the RCC (Regional Contracting Center), which is mainly lead by the USAID and the US army. 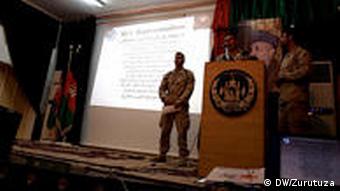 US business presentations appeal to Afghan honesty and professionalism

The presentation of Helmand's 4th Business Conference finishes with applause and an invite for lunch outside by the Marines. Generous portions of rice with raisins and meat are distributed from a truck to all those who have gathered at the Helmand governor's assembly hall. The locals eat on the floor around the silver round trays while the US soldiers line the benches.

But after the apple and banana for dessert both groups mix for the tête-à-tête with the Marines who have set up in different stalls. "Buy local, build Afghanistan," extols the slogan above them. $22.5 million (16 million euros) are waiting to be distributed among all those "committed to rebuild their country."

Pashtuns in shalwar kameez (the loose local outfit) and turbans swirl around the military, struggling to hand them their business cards. Serving in a shirt and camouflage pants a bit too tight for the conservative local standards, the only US Marine female soldier is doubtless collecting the majority of them.

"The most important thing is that the reconstruction is made by and for helmandies," she says. "But they have to understand that it has to be done the American way: everything has to be transparent!" 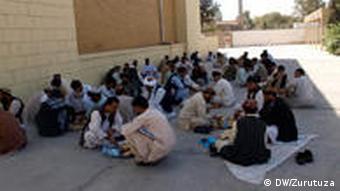 Afghans mix business with pleasure in the hope of establishing contacts

At just 30, Wahid already has his own construction company. Today, he is attending his first business conference ever.

"I have the best team to build a good road to Gereshk," says the young entrepreneur. He refers to that section funded only two years ago with 52 million euros ($73 million) by both the UK and Denmark, but whose work has not yet begun. "We're already working on it," is the Helmand governor's recurring answer.

Having previously attended three of the four business conferences held in Helmand, Ismatullah is one of the seasoned veterans. He asked for permission to get to the stand during Captain Lambert's presentation but was prevented from doing so.

"Two years ago I got a subcontract from an American company. They told me to buy equipment worth 1.8 million Afghanis (30,000 euros) but I never heard from them again," says this Pashtun from Nad-e-Ali, one of the many "no-go areas" in Helmand.

Saif has flown in from Kabul today just for the conference. This local from Tora Bora, on the Pakistani border, works for Roshan, the Afghan main phone company, but he also has his own construction company. Nonetheless, he claims not to have won a single contract since he started up two years ago.

"All of these visiting cards the Marines are collecting go directly to the trash," says the disappointed Pashtun in the perfect English he learned as a student in Peshawar. 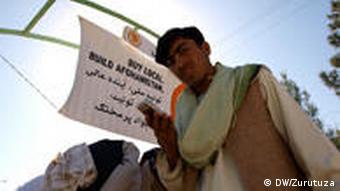 Locals want to help rebuild their country, but need the funds to do so

"Contracts are always taken by the people inside the military compound, starting with the translator. He also has his own construction company, you just need $1,000 to establish one. But there are also the close friends and the relatives of the soldiers themselves, many of whom have created their own business companies in Afghanistan. Of every $100 that come into Afghanistan, $80 go back to the States," says Saif flatly.

"I aspire to a subcontract, but I'd be happy with just a sub-sub, or even sub-sub-subcontract," Abdul Hamid, a native of Lashkar Gah, Helmand province's capital city, says somewhat wryly.

"The little they get to build simply collapses due to the substandard materials. These Marines are able to build a school with sandbags," adds this Pashtun just before heading toward the regiment's translator.

"Their bases are the only thing they build solid," says Ali Reza, who just came "for the free food." "Did you get to see the base they have in Kandahar when you flew here from Kabul? Well, the one they have in Logar province is even bigger!," adds this 40-year-old truck driver on his free day.

"You know how much they are paying for a one-room Russian flat in Kabul? $100,000. Russian is still the best quality in Afghanistan," says Sharifullah, 55, adding that "more and more people look back with nostalgia at Najibullah's times." (Mohammad Najibullah was Afghanistan's last president of the Soviet-backed Democratic Republic of Afghanistan - ed.)

"May Allah bless his soul," says the Pashtun of the deceased former Communist president of Afghanistan. Behind him, a group of Marines fold sawhorse tables and remove the banners hanging above them.

Allegations of fraud are increasing following last weekend's parliamentary election in Afghanistan. The country's political process has been faltering over the past year, putting it at a crucial turning point. (22.09.2010)

Progress in Afghanistan gets too little recognition, says Westerwelle

In an interview with DW-TV, German Foreign Minister Guido Westerwelle stresses that the international alliance has not failed in its mission in Afghanistan. (07.08.2010)