Lightning strikes and a Christmas washout in northern Europe

Two planes have been struck by lightning in Denmark as Storm Urd sweeps across Scandinavia. In Germany, a woman has been killed after a tree fell onto her car in stormy weather. Two planes en route to Copenhagen in Denmark were struck by lightning on Monday. A Scandinavian Airlines flight from Reykjavik in Iceland was forced to make an emergency landing on the Danish island of Bornholm with more than 100 people on board.

Passengers were due to continue their journey on Tuesday after staying on the island overnight.

The plane had already been diverted after strong winds prevented it from landing in Copenhagen on Monday afternoon. The plane was then struck by lightning on approach to Malmö Airport, in Sweden, and subsequently redirected to Bornholm.

A plane traveling from London was also struck by lightning but was able to complete its journey to the Danish capital. Copenhagen Airport warned that strong winds were likely to cause further disruption to flights on Tuesday. 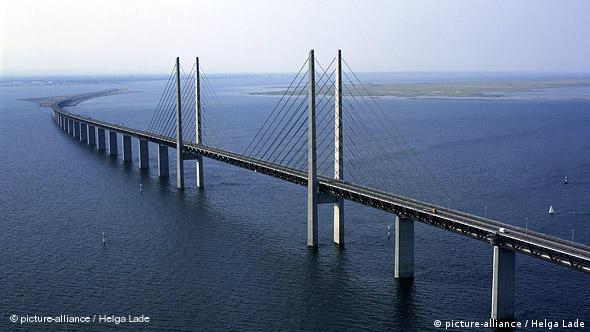 The Oresund Bridge, which connects Denmark and Sweden, was closed on Monday due to high winds

Storm Urd has swept over Scandinavia during the Christmas holidays, causing flooding, power blackouts and transport disruption across Sweden, Norway and Denmark. Authorities in all three countries reportedly advised people in the areas worst affected to consider staying at home on Monday night.

One dead in northern Germany

Gales and heavy rain hit northern Germany on Monday. Emergency fire services in Hamburg attended some 80 call-outs in relation to the bad weather and there were reports of flooded property and toppling trees and scaffolding.

In nearby Kiel, a 34-year-old woman was killed when a tree fell onto her car during stormy weather. A 24-year-old male passenger was taken to Kiel university hospital with serious injuries.

Storm Conor brought rain and winds of up to 130 kilometers per hour to the north of the United Kingdom on Tuesday morning. This follows on from Storm Barbara, which left thousands of homes without power in northern Scotland last week. Further south, major roads were closed due to icy conditions.

For decades we have seen a growing number of climate disasters worldwide. Major cities are insufficiently protected from floods. Today, there are worldwide initiatives to better manage large-scale flooding. (07.11.2016)