Lichtenhagen riots continue to haunt many | Germany | News and in-depth reporting from Berlin and beyond | DW | 26.08.2012 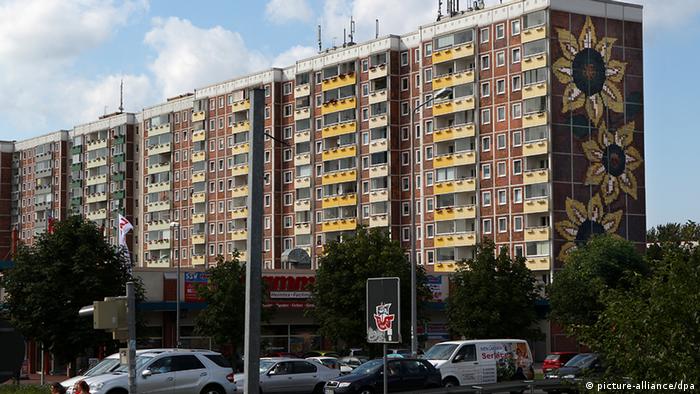 Brightly painted sunflowers now adorn the walls of an infamous apartment building in Lichtenhagen, a district in the eastern German city of Rostock. The concrete residence was once home to many asylum seekers in the area. As a prime example of what modern housing was like in the former East Germany, the building has been well maintained. The grass in front of it is neatly cut. Seagulls often circle above - a reminder that the soft, sandy beaches of the Baltic Sea are not far away.

A rather idyllic place - were it not still haunted by events that took place twenty years ago. At the time, flames licked the walls of the building, and hateful, young Germans fired off petrol bombs at innocent people. 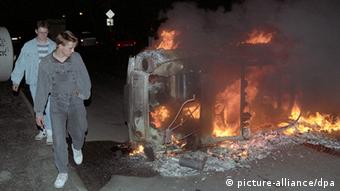 The violence targeted asylum seekers and contract workers, who had been hired from Vietnam by members of the German Democratic Republic (GDR). A mob raged outside of the building for a full four days and nights as on-lookers applauded. Images of the attacks shocked many and have since become ingrained in the collective consciousness.

Today, many residents recall being pushed into a corner. "We were powerless," is what one usually hears. "What were we supposed to do?" It's an almost defiant question still being asked even 20 years after the riots.

"Nothing was done; no politician showed his face here," said Sieglinde Rehberger. The 75-year-old woman, her face crinkled and sun tanned, witnessed everything first hand. "It was terrible," she said as she paused in front of the apartment building. 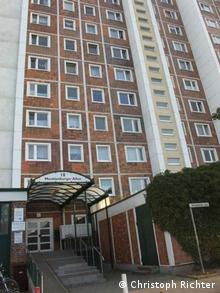 On the surface of the attack site, all traces of violence are gone

The building's entryway bears plaques advertising a driving school and a doctor's office - but no sign commemorates the terrible events that took place there. Sieglinde Rehberger sees that as a failing: "It must be commemorated! That trauma is going to stay with us forever."

33-year-old local financial official Thorsten Helm shares her view. He seems frustrated when talking about the issue - perhaps even a bit guilty. Helm stresses the importance of remembering. Recalling the attacks, he says, should serve "as a warning in our minds."

But sentiments like his are the exception, not the rule, in Rostock-Lichtenhagen. Most passer-bys don't want to comment on what happened. Others yell abusively, "They should just leave us alone!"

Rumbles beneath the surface

These days, the state of Mecklenburg-Pomerania is home to 31,000 foreigners, 7,649 of whom live in Rostock. Among them: Irina, originally from Ukraine, who moved to Lichtenhagen eight years ago. She speaks with a gentle Slavic accent. "Well," she said, "People here say hello to you. But they aren't always nice, and some also cause trouble."

Irina reports having received threatening letters, and that her neighbors slandered her at the property management office. Many of her neighbors are long-time residents, having lived there before German reunification. And one doesn't have to look hard to find people opposed to having Russian or Vietnamese immigrants living under the same roof as they do. 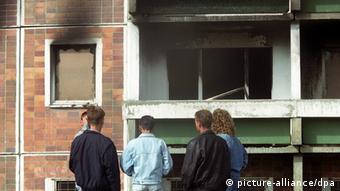 August 1992: Disbelief at the extent of extremist rage

Irina isn't really afraid of them, she says. But she doesn't feel completely at ease either. Smiling, she seems to hope for the issue to vanish into thin air. Not wanting to comment any of this, Irina's husband leaves her alone during our interview. From a distance, he soon calls over to her to stop talking and rejoin him.

"It's all nonsense," is the indignant reply of an elderly man when asked about prejudices against foreigners. "If they are tidy and speak German, then they're just fine," he said. He then added that local residents have no problems with immigrants - but used two disparaging and racist terms in German to refer to foreigners.

The parking lot of a nearby supermarket is home to a small, run-down kiosk owned by Mr. Hu from Vietnam. In front of it, a group of men and a woman drink beer and swear loudly enough for everyone to hear. Their anger is directed at journalists, the media and politicians.

"Nowadays it's impossible for us to drink our beer in peace - we've got to watch where we hang out," one man remarked. Another complains that they've been upstanding people their entire lives, but now, at every step they take, they are reminded of the past. People look at them with disdain upon hearing they are from Lichtenhagen, he added.

"One has to draw a line at some point. What good is it to bring up the same old stories again and again?" he asked.

The group is nodding and drinking again. Drawing a line and leaving the past behind is what many inhabitants of Rostock-Lichtenhagen would prefer. 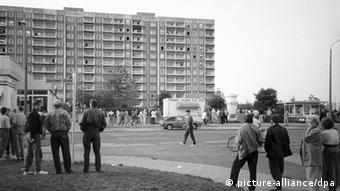 1992: The rioters draw a number of local on-lookers

To commemorate the past and maintain it as a warning - that's the intention of a private initiative dubbed Lichtenhagen 2012. The group delivered 10,000 DVDs to the homes of Rostock residents, including a depressing, two-hour BBC documentary about the 1992 riots. The necessary funds for producing the DVDs - 2,500 euros ($3,129) - came from donations made online.

"We want to raise awareness about the underlying factors that caused the attacks, especially among young people, in order to alert them to the dangers of right-wing extremism," said Lars Krueger, one of the project's initiators. His criticism is that people avoid the topic even in official circles, saying they apparently hope to fight right-wing extremism by keeping quiet about it.

Nonetheless, Krueger said, officials claim they want to prevent history from being forgotten.

Why the rule of law burned down in Rostock

In 1992, the port of Rostock saw some of the worst xenophobic violence in post-war Germany, when a mob of young people attacked a building housing asylum seekers. The incident had serious consequences for the country. (22.08.2012)

A new report criticizes German authorities of downplaying right-wing violence. The report claims little has been done in the wake of the murders by the underground group NSU. (14.08.2012)

20 years after the Rostock riots