Libyan lawmakers are split over the unity government, but also over the question of whether the latest no-confidence vote was valid. The row raises questions about a UN-backed election. 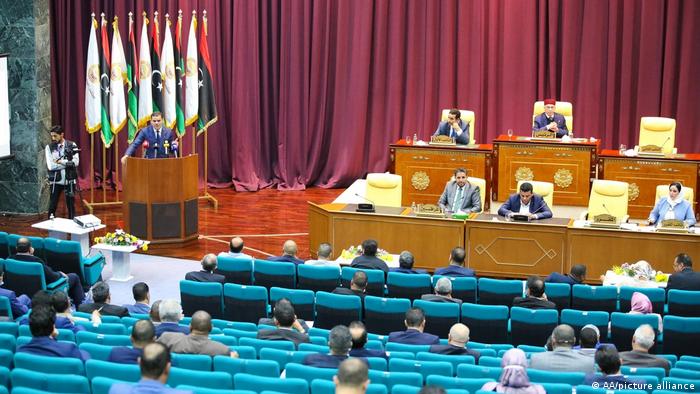 The lower chamber of the Libyan parliament withdrew their support for the unity government that was approved earlier in the year to lead the war-ravaged country through elections.

Abdallah Abaihig, a spokesperson for the legislature, said 89 out of 113 attending lawmakers voted against the Cabinet.

The government, led by Prime Minister Abdul Hamid Dbeibah, will now take on a caretaker role, according to Abaihig.

However, a parliamentary source told the AFP that the vote was invalid because only 113 deputies attended the session in the eastern city of Tobruk.

According to the source, parliamentary rules require a minimum turnout of 120 members of the 200-seat house for a no-confidence vote.

Also, the Tripoli-based High Council of State, the parliament's upper house, was quick to dismiss the Tuesday vote.

"The HCS rejects the no-confidence measure against the national unity government," a spokesman said, adding that it violated established procedures.

Both chambers have also clashed over the election law, passed by the House of Representatives earlier this month. But the High Council challenged the law and produced its own version.

The latest row further undermines the unity government's ability to push through the UN-backed plan and hold the presidential election in December.

Tuesday's vote is the latest example of a long-standing dispute between Libya's rival factions that has plagued UN-backed efforts to resolve the country's crisis.

Oil-rich Libya has been in turmoil since longtime ruler Moammar Gadhafi was toppled in 2011. Rival administrations and scores of militias were vying for control, with foreign powers including Turkey, Qatar, the UAE, Egypt, France and Russia all getting involved.

In 2014, rival factions split Libya in two, with an internationally recognized government in Tripoli and a separate administration backed by the House of Representatives in the east.

The unity government was finally set up in March. The provisional administration, installed by the House of Representatives, replaced the two rival cabinets with the main task of leading to the country to the election set on December 24.