Attacking midfielder Calhanoglu faces a four-month FIFA suspension, effective immediately. The case dates back to his time with Karlsruhe as a teen, when he did not uphold a deal to move to Turkish club Trabzonspor. 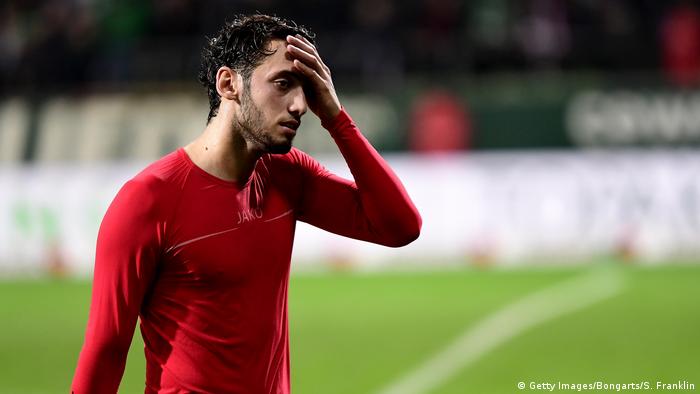 The 22-year-old Turkish international was accused of breach of contract, a charge upheld both by FIFA and now the CAS in Lausanne, over a deal made with Turkish club Trabzonspor in 2011 but never honored.

Calhanoglu was a 17-year-old with Karlsruhe at the time. He ultimately stayed in the southwest of Germany, extending his Karlsruhe contract before moving on to Hamburg, which proved his stepping stone towards Leverkusen.

"Of course we regret this decision, which does not seem justified to us," said Leverkusen's sporting director Rudi Völler. "It's a tough blow for Hakan but also for us. Although Bayer Leverkusen had nothing to do with the events of 2011, we are also being severely punished. Now we are missing an important player in the decisive phase of the season."

Calhanoglu: 'In our culture, fathers have the last word'

Calhanoglu has discussed the case in an interview with the local Cologne newspaper "Express," with the full version set for publication in Friday's edition.

"This case will only make me stronger," he said, adding how bad he felt for his current employers. "That's what makes me sad. I feel guilty and am extremely sorry." Calhanoglu played with Karlsruhe from 2011 to 2013, before moving up to Bundesliga club Hamburg

Calhanoglu told the paper that the deal with Trabzonspor had come as a surprise to him at the time, when he learned by chance "that my father was meeting with Trabzonspor representatives in a restaurant in Darmstadt." He said that his father had told him that he had to sign the contract.

"In our culture, fathers have the last word. It's just not done to show them no respect," he said. "I was 17 years old and was not aware of the implications. Really, I only had football on my mind."

Rather than overturning a FIFA suspension from early 2016 at appeal, the CAS actually found FIFA's penalties to be insufficient, ordering that Calhanoglu should also pay a 100,000-euro ($108,000) fine to Trabzonspor.

FIFA's suspension was on hold pending the appeal, but took effect immediately. Calhanoglu will therefore be unavailable for Leverkusen's away game against his old club, Hamburg, on Friday night.  The suspension applies to all competitions, meaning he will not be available in the Champions League last 16 tie against Atletico Madrid either.

The Turkish international has scored six goals for Leverkusen this season in the Bundesliga, making him joint top-scorer along with Javier Hernandez.