Leverkusen out of the Champions League after penalty shootout drama

Leverkusen are out of the Champions League aftering losing 3-2 on penalties to Atletico Madrid. Mario Suarez's goal in the first half took the game to extra time, but Leverkusen weren't confident enough throughout. 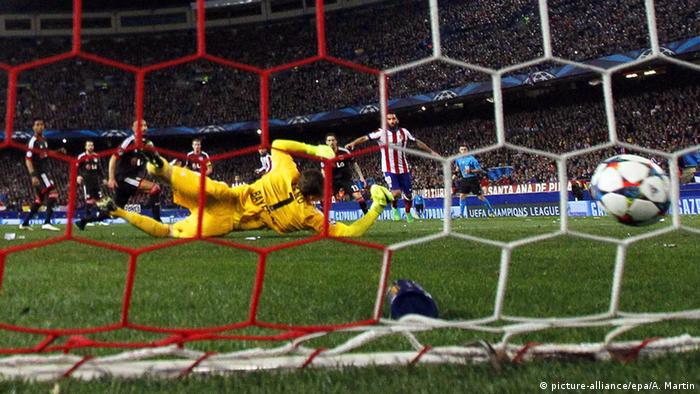 In their biggest European game since reaching the final in 2002, Leverkusen looked a little nervous in the opening stages of their second leg tie against Atletico Madrid. The home side was applying most of the pressure, but it was the visitors who were closer to scoring in the opening 25 minutes - both Karim Bellarabi and Heung-Min Son had efforts.

Leverkusen's best chance of the half came when Lars Bender fed Heung-Min Son through in between the defenders, but the South Korean was let down by a poor first touch. Oddly enough, even though no goal was scored that chance cost the home side - goalkeeper Moya suffered a hamstring injury and had to be replaced by Jan Oblak.

The change in keeper didn't deter the hosts. Stirred by a rousing home crowd, Diego Simeone's men got the goal they needed. Emir Spahic gave away a needless foul in a dangerous area, Leverkusen failed to clear the free kick properly and Mario Suarez's shot took a deflection off Toprak to fly past Leno.

The first half had plenty of robust challenges, and the tempo at the start of the second showed no signs of letting up as Leverkusen found themselves under further pressure. Gonzalo Castro had to be aware to deny Antoine Griezmann what looked a certain goal when the Frenchman broke through, and despite flashes of intent in the first half Bayer were well short of ideas and chances in the second.

Contest on a knife edge 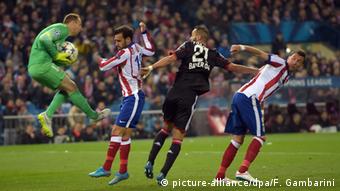 Leverkusen paid the price for a lack of bravery

With the intensity increasing, Arda Turan fired over and then Koke sent a free kick narrowly wide. Leverkusen started to lose whatever grip they had had on the game as Roger Schmidt's team looked a shadow of the side that confidently beat their Spanish hosts in Germany three weeks ago.

In the final ten minutes of the game, Leno was called into action to deny Arda Turan as a frantic finale set in. Leverkusen absorbed a wave of Atletico attacks and did enough to take the game into extra time. More time didn't change the physical nature of the contest though, nor the fact that chances were at a premium.

Leno saved well right at the start of the second half to deny Raul Garcia, but the abundant fouls continued to hamper the flow of the game - ten yellow cards were handed out on the night - and so, unsurprisingly, the game went to penalties.

In the shoot-out, Leverkusen had an early advantage when Raul Garcia missed the first spot kick, but Hakan Calhanoglu's tame shot down the middle failed to make the most of it. After successful kicks from Griezmann, Rolfes and Suarez, Toprak blazed over to hand the advantage to the hosts.

When Leno brilliantly saved Koke's penalty and Castro leveled, the result was back in the balance though. Fernando Torres, off the bench, scored to put the pressure on substitute Stefan Kiessling but, like Leverkusen on the night, he cracked under the pressure and fired over the bar to hand Atletico Madrid a place in the quarterfinals.

Elsewhere, Arsenal fell one goal short of a remarkable turnaround in Monaco. Trailing 3-1 from the first leg in London, Arsene Wenger's side won 2-0 in France but exited the competition on away goals.

With a 1-0 lead behind them, in-form Bayer Leverkusen travel to last year's competition runners-up Atletico Madrid, in the Champions League on Tuesday. Will we see a second German team through to the quarterfinals? (16.03.2015)

Leverkusen prepared for their Champions League clash in Madrid with a comprehensive 4-0 win over Stuttgart. The Swabians are now left rock-bottom for another week with the worst record in the club's history. (13.03.2015)

Bundesliga preview: It's now or never for Dortmund

Dortmund will host Cologne on Saturday in what will be a crucial litmus test for BVB. The men in yellow and black will be wanting to get momentum going ahead of the Champions League. (12.03.2015)