Leroy Sane and Niklas Süle both scored their first goal for Germany as Joachim Löw's side eased past Russia. Löw made a number of changes and several young players impressed as the hosts blew Russia away early on. 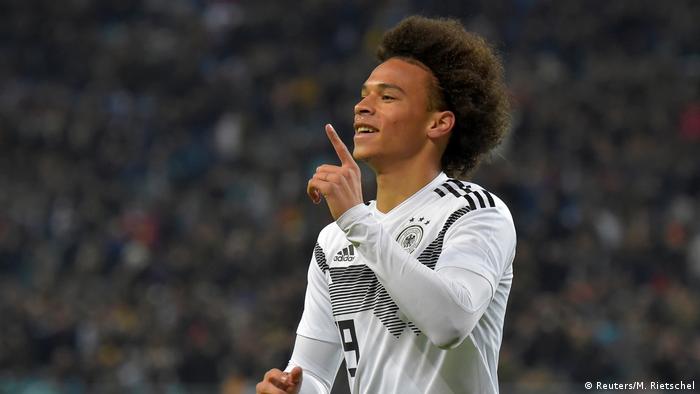 A first half packed with pace, power and goals allowed a fresh-looking German side to dispatch World Cup quarterfinalists Russia in their penultimate game of a difficult 2018.

Leroy Sane, Serge Gnabry and Kai Havertz lined up behind Timo Werner and the home side’s front four caused Russia problems from the outset. As such, it was no surprise when three of them teamed up for the first goal. Werner dropped deep to feed Gnabry and the Bayern man squared for Sane to sweep home his first Germany goal.

Niklas Süle followed suit soon after when some dreadful Russian defending allowed him the time and space to stroke home from a corner to open his Germany account.

The pace and movement of Germany’s younger players was causing all manner of problems for the World Cup hosts and the third felt inevitable. This time Havertz was the star, if not the scorer. The Leverkusen teenager gathered a ball from Süle on the half turn and released Gnabry in one movement. Gnabry was just as decisive with his finish, blasting home first time from just inside the box.

The second half passed in a blur of substitutions, staggered by both coaches seemingly in order to suck any tempo out of the game. Only one was forced, with a dreadful over-the-ball tackle by Aleksandr Yerokhin forcing Jonas Hector to be carried off with an ankle injury that may prove serious.

It was the only real black spot in a display that provided, in the first half at least, a glimpse of the Germany Löw must hope will emerge from the ashes of Russia 2018.

FULL TIME: Brandt almost squeezes a cross through to Müller and that's the last of it. An impressive first half from Germany and a whole lot of nothing in the second half. There will be a match report here any second.

90+2 - Russia have a corner. And waste it. They've been pretty woeful tonight, though they are missing a few of their best players.

90' - We have a pitch invader. A man carrying a Russian flag makes it on to the turf and is there for well over a minute before a couple of stewards loaf on. He evades them pretty easily for a while, gets the crowd onside and is then marched off.

88' - The ball bounces kindly to Müller on the edge of the box but he doesn't get anywhere near enough on it and it loops in to the keeper's arms. The Bayern man is then in space on the right but his cross is blocked behind for a corner. From that, the ball falls to Brandt and his low drive is deflected round the post. Russia finally clear.

83' - Neuer charges out and gets a bit lucky. He just about beats his opponent to the ball but can only graze it to Gazinsky. Neuer is miles out and Gazinsky tries a lob but gets it all wrong.

79' - Something happened that wasn't a substitution! Goretzka found Schulz on the overlap and he tried to pull back for Müller, but it was just behind the Bayern man. Russia also made another sub.

77' - Sane for Goretzka. I think I've made my feelings on this clear.

75' - Guess what? Yep,, another sub. Ionov off, Poloz on. There needs to be some legislation to stop these staggered subs, it sucks all the tempo out of the game.

72' - This is getting ridiculous now. Just bring on more than one at once. I don't understand why the coaches wouldn't do that. Who benefits from that minute? Anyway, Rausch for Kudryashov for Russia. Müller for Gnabry for Germany.

71' - Russia bring on Kambolov for Kuzyayev. Bring back the Nations League.

70' - Schulz on for Hector now. The Cologne man wasn't stretchered off but it did look a bad one, let's hope he's ok.

65' - Double sub for Germany. Brandt and Rudy on for Havertz and Werner. Hector is being helped down the tunnel.

64' - Hector is down in a crumpled heap after a really poor tackle from Erokhin, who came over the top of the ball. That's an ankle breaker and he's lucky to get away with a yellow.

63' - Neuer drops a corner but the referee's whistle comes to his rescue. There didn't seem a great deal there.

61' - Germany make their first change, Tah for Rüdiger. We're at that stage where subsitutions are more frequent than incident.

55' - Russia make the first substitution, Ari off for Zabolotny, and they almost score from the corner. It looks like a German head gets a flick but Hector is there to clear off the line.

53' - The tempo has slowed a fair bit here, the Germans keeping Russia at arm's length for the most part.

49' - Sane drops the shoulder and cuts in to the edge of the box on to his left. But he doesn't quite catch it and it's a simple save.

48' - Big chance for Russia. Kimmich is robbed by Kuzyayev, who feeds Ionov. Rüdiger rashly dives in and the Russian steps inside him easily but drags his shot just wide from 15 yards. Sloppy start from the hosts.

46' - And we're off again. You feel there's more goals for Germany here.

HALF TIME: Apologies for the lack of updates there, a few technical glitches our end. That was the kind of half Germany fans have craved for a while. They've looked slick, quick and decisive, which poses some interesting questions for Löw regarding some of his senior men. However, it must be said, Russia were pretty woeful, particularly for the second goal.

40' - That was a lovely goal, and a demonstration of what Kai Havertz is all about. The Leverkusen teenager took in a Niklas Süle pass on the half turn and in one movement slipped in a ball for Gnabry, who leathered it home first time.

37' - Gnabry, poppinig up deeper now, sends Sane scuttling down the left. He jinks his way to the byline and stands up a tempter but Rausch is there first to chest back to the keeper on the edge of his own six yard box. Ice cold.

35' - Werner gets some space on the right and almost finds Gnabry's sprint in to the box. Germany's front three look pretty fluid, particularly those two, and it's causing Russia all sorts of problems.

32' - I think this is the kind of performance that people expected of these teams at the World Cup. Instead we got the opposite.

25' - Wow, that is some comedy defending from Russia. A corner came in and the whole defense charged out bar Ionov, who stayed on the goalline. The second ball dropped to Süle with no-one anywhere near him and he simply steered it in the corner. Bizarre stuff.

23' - Sane should have his second goal. Havertz latches on to a lovely ball from Gnabry (I think) in the center of the park and is in absolutely acres. Sane is waiting in the center of goal in almost as much space. Havertz picks him out but Sane heads straight at the keeper. There wasn't much pace on the ball but still...

22' - Germany have aborbed that little spell from their visitors and are stroking it around the midfield. The encouraging thing is that the man on the ball seems to have runners to pick out, something that's been missing for a while.

18' - Russia finally get in to their opponents' half and Sane pulls down Ionov 25 yards out. Rausch has a pop with his left but it's well over from the former Cologne and Hannover man. Moments later Ionov has a speculative pop which also fails to trouble Neuer.

15' - It looks like Löw has gone for three at the back (Rüdiger, Süle, Ginter) with Hector and Kehrer as the wingbacks. It's early days but this looks a much more mobile Germany side than we've seen for some time.

13' - Kehrer drives one across goal from the right but it's just a yard ahead of Sane. It doesn't feel like a second goal is too far away for Germany.

11' - There is a touch of controversy about it but that was a well-worked and deserved goal, Russia have barely had a kick.

8' - A nice move started at the back is finished by the Manchester City man. He swept home Gnabry's square ball after Gnabry was played in by Werner. Replays show Sane was offside in the build up but not when he scored. That's his first goal for Germany.

6' - The hosts look fairly comfortable in these early stages as Kehrer almost picks out Hector with a crossfield pass that I'm contractually obliged to call raking. It's flicked behind but Kimmich's corner comes to nothing.

3' - Busy start from Germany. Havertz drops deep and slides one in to Sane. The winger looks to play the ball back inside but it's cut out.

1' - The anthems have been sung, the coaches have hugged, the poses have been struck and we're off.

20: 43 - A couple of ex-Bundesliga men in the Russian team in the shape of Roman Neustädter, who actually won a couple of caps for Germany in 2012 before switching allegiances to Russia, and Konstantin Rausch, who left Cologne for Dynamo Moscow earlier this year. Rausch also won caps for Germany at youth level.

20:38 - At the back, Thilo Kehrer is handed a second consecutive start for his country on the back of a good run of game time at Paris Saint-Germain. With Niklas Süle fast emerging as Germany’s best center half, are we seeing the beginning of the end for the Hummels-Boateng axis?

20:34 - There’s little doubt that Monday’s Nations League clash against the Netherlands is Germany’s biggest of this international break, but this one isn’t without interest.

With Thomas Müller struggling badly for form, Mesut Özil off the international scene and Marco Reus out of this match with a knock, Gnabry, Havertz and Sane have a chance to make a statement. It’s a big game for Sane in particular. The Manchester City flyer has struggled to reproduce his Premier League form for the national team and was left out of the World Cup squad. Can he turn it on tonight?

20:30 - Hello, and welcome to the death throes of a shocking year for Germany and Joachim Löw. All the talk this week has, once again, been about regeneration of this team after the World Cup debacle but Löw says it'll be a slow process.

One of the main qualities his team have lacked is pace but that doesn't look like being the case tonight. Serge Gnabry, Kai Havertz and Leroy Sane form the attacking trident behind Timo Werner at the front end of what looks like a 4-2-3-1, though the position Matthias Ginter plays in could change that. It might even be three at the back. Anyway here's the Germany team.