Leipzig - a city of history and culture

From Napoleon to J.S. Bach and Neo Rauch - the eastern German city of Leipzig has been shaped by some of the most important figures in recent and modern history. 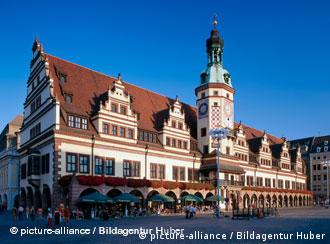 Leipzig's Central Station is as impressive as it is practical. The building was restored and modernized in 1997 and since then it has not only been the arrival point for tourists visiting Leipzig, but has become a tourist attraction itself.

Anyone who wants to delve into Leipzig's rich history should pay a visit to the old City Hall. It is one of the most important Renaissance buildings in Germany and it now houses Leipzig's Municipal History Museum.

A landmark that is visible from afar is the Monument to the Battle of the Nations. It commemorates Napoleon's defeat near Leipzig in October 1813.

Leipzig is a city of music and is inextricably linked to the work of composer Johann Sebastian Bach. Leipzig's Bach Archive and its associated museum reopened in March 2010 following major renovations.

In recent years, Leipzig has also become an important center for art and painting, with many galleries located in an old cotton mill. The building also houses around 100 artists' studios. The city's Museum of Fine Art showcases important examples of the New Leipzig School art movement, including works by Neo Rauch.

Leipzig also has a lot to offer night owls - from the traditional Auerbachs Keller, where Goethe often quaffed his wine as a young man, to trendy bars and cafes.

Click on the multimedia links below for more on Leipzig.

The city of Leipzig