As supporters of the anti-Islamization group PEGIDA took to the streets in Leipzig, others lit candles to protest their presence. Naomi Conrad reports from Leipzig. 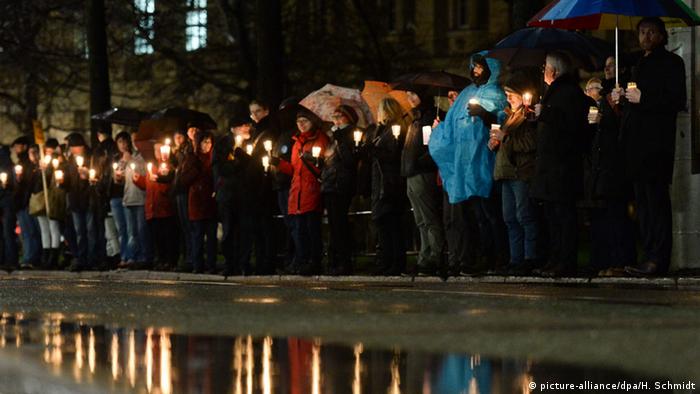 As small groups of men and women clutching flickering candles and umbrellas wandered past her down the street, Elke, a petite, elderly woman, peered from under her huge hood, and grinned: No, nothing, not even the pouring, icy rain, could have prevented her from coming to central Leipzig today, and lighting a candle, "absolutely nothing."

She was one of several thousand people who braved the rain on Monday evening in the East German city, famous for its peaceful protests against the GDR leadership in 1989. They were following calls from a broad coalition of trade unions, churches, NGOs and businesses such as Porsche and BMW to form a human chain around the city center to demonstrate against LEGIDA, the local chapter of the xenophobic group PEGIDA.

Launched in 2014, the group roughly translates as "Patriotic Europeans Against the Islamization of the West." It has been holding regular rallies across Germany. It is often described as a catch-all movement, which attracts a wide-range of protesters with different resentments and concerns, including but not exclusively Hooligans and right-wing extremist groups.

At its height, its rallies drew thousands in Dresden but also Leipzig, where supporters first marched a year ago, but attendance has waned in recent months, following bouts of infighting among its leadership.

There are now fears that reports of sexual assaults on New Year's Eve in Cologne and several other cities by men reportedly of North African and Arab origin, may boost the group's numbers. A PEGIDA rally in Cologne last weekend drew an estimated 1,700 supporters and was disbanded by the police after bottles and fire crackers were thrown at officers. 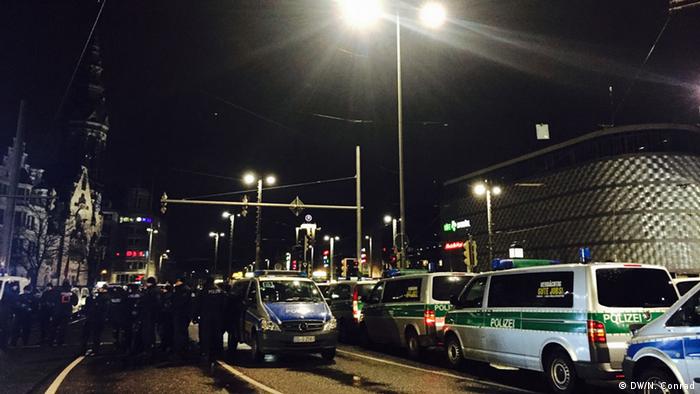 That is why Mr. Strohmann, a pensioner from Leipzig, had left his sick wife at home to join the human chain: "I felt I had to send a signal that this is not my Leipzig," he said, as a family pushed past, the two children proudly brandishing their candles. Mr Strohmann shook his head sadly: He just couldn't understand, he said, what his city had come to.

A few blocks away, music blared from a stage, as demonstrators chanted "Nazis! Nazis!" across the wide, empty road cordoned off by a barricade of police vans, guarded by policemen in black riot gear.

In the past, PEGIDA supporters and opponents have repeatedly clashed.

On the other side of the road, some 2,000 PEGIDA supporters, the majority of them men, milled around, clutching German flags and banners declaring "Islamism not welcome here" – the protesters' response to the "refugees welcome here" stickers plastered on lamp posts across the city.

Another banner read: "Merkel take your Muslims with you and get lost," while one proclaimed "Freedom for Germany."

As two women with German flags pushed past a group of men sporting shaved heads, a young man from a village in Brandenburg dressed in black, his face covered with piercings , struggled to articulate why he regularly took part in PEGDIA rallies: "Because I share their opinions," he said. When probed, he added that "Merkel should resign." 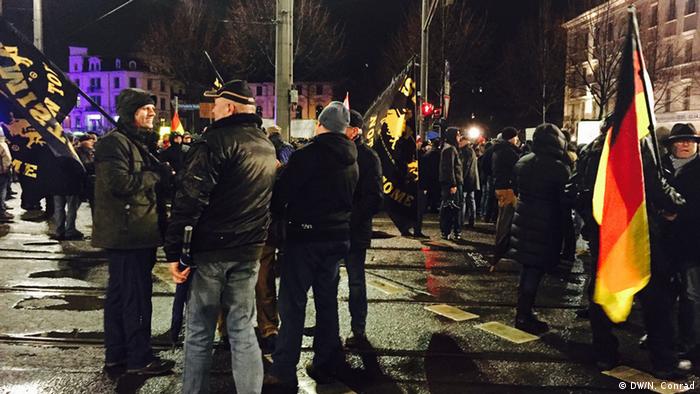 After nearly falling off the media's radar last spring, the refugee crisis reinvigorated the numbers seen at PEGIDA rallies in Dresden and in other cities, such as Leipzig

A few steps away, a pensioner from Leipzig waving his own "Islamism not welcome here" banner was more prepared to explain why he had been coming to almost every rally in the last year: "I don't want my grandchildren to live in a Sharia state." Beside him, a man nodded: "They're f***ing our children!"

As his friend turned away, the pensioner told DW he had "armed" his family with pepper spray, hastily adding that he was not "a Nazi" – an accusation often leveled by those protesting PEGIDA and its local branches.

Like all the other demonstrators DW interviewed, he vowed to continue protesting, as the crowd chanted "we are the people."

Taking to the streets again

Others too, though, are adamant they will take to the streets again: Monika Lazar, a member of parliament for the Green Party and its spokeswoman against right-wing extremism, said she was in it for the long run: "Each week we have to defend democracy."

Lazar, who says she has been called a "traitor" so many times in the streets of her home town that she had "almost got used to it," said she was optimistic that one day the movement would fizzle out.

She smiled ruefully: "One year of LEGIDA is more than enough."

Most anti-refugee demos in Germany 'controlled by far-right'

The German Interior Ministry believes that PEGIDA-related demos around the country were "controlled and influenced" by far-right organizations. This undermines claims they represent a mainstream people's movement. (03.12.2015)