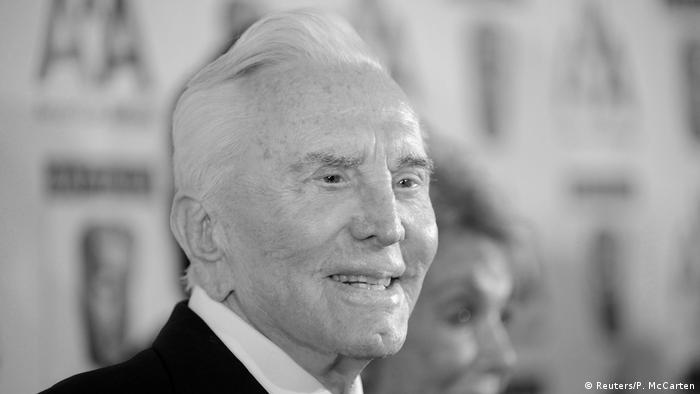 Hollywood Actor Kirk Douglas has died at the age of 103, his son Michael Douglas announced on Wednesday.

"It is with tremendous sadness that my brothers and I announce that Kirk Douglas left us today at the age of 103," Michael Douglas said on his official Facebook page.

"To the world, he was a legend, an actor from the golden age of movies who lived well into his golden years, a humanitarian whose commitment to justice and the causes he believed in set a standard for all of us to aspire to," Michael Douglas added. "But to me and my brothers Joel and Peter he was simply Dad."

"He leaves a legacy in film that will endure for generations to come, and a history as a renowned philanthropist who worked to aid the public and bring peace to the planet," the younger Douglas said.

Kirk Douglas embodied the notion of the American Dream. The headstrong actor sparred at times with Hollywood, but his determination and skills as an actor turned him into a household name.

In 2016, just weeks before his 100th birthday, the actor was honored by the World Jewish Congress for his contribution to Jewish culture. The soon-to-be centenarian said the honor boosted his circulation. When you turn 100, every day counts, he added.

He survived a number of accidents on set over the years, as well as a helicopter crash and a stroke. 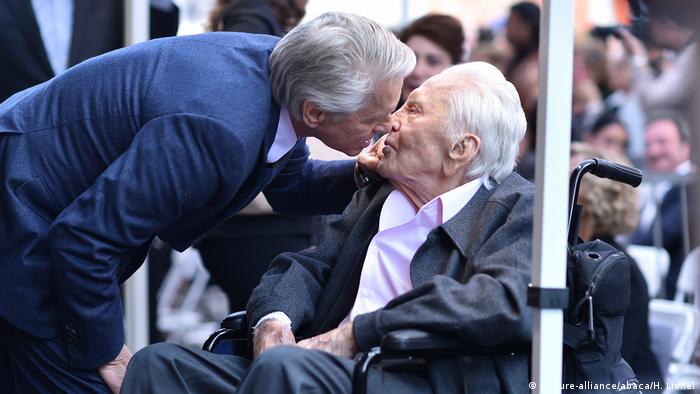 Douglas was born in 1916 in Amsterdam, an industrial city in the US state of New York. Named Issur Danielovitch, he grew up in a Jewish-Russian family, his parents having immigrated to the US from Belarus. His father earned very little as a rag collector, while his mother cooked and looked after the family. Early on, Kirk had to keep himself afloat with odd jobs and contribute to the family income.

Yet the young Douglas was extremely ambitious. His mother had told him that, as a Jew, he'd have to be twice as good as others to achieve his goals. Thanks to a scholarship, he was able to attend college, but dropped out of his law studies to pursue acting.

Over the next two years, he worked hard at the New York Academy of Dramatic Arts, and his efforts paid off: He snagged his first role on Broadway. Yet he didn't stick to the stage for long before moving on to film  — and that was due to a mere coincidence.

That involved his friend and fellow acting student Lauren Bacall. Douglas later wrote that she was "extremely attractive, blond, blue-eyed, with dimples on her chin — and very talented on top of that."

Alongside Humphrey Bogart, the young actress had been busy making a name for herself with Hollywood executives. Bacall used her influence and got Kirk Douglas (now his stage name) a role in The Strange Love of Martha Ivers in 1946.

However, it became the first big disappointment in the young actor's career. He didn't get the lead, but was cast as the weak husband of Barbara Stanwyck, who was already a big star at the time. Nevertheless, Douglas had had personal experience with alcoholics, thanks to his father, and he played Walter O'Neil with brilliance and intensity. It was a good start to what would become a legendary career, a rags-to-riches tale that epitomizes the American dream.

Breakthrough as a boxer

The young actor garnered positive reviews from the critics. Hollywood producer Hal B. Wallis, always on the lookout for new talent, offered him a seven-year contract. But Douglas turned it down, not wanting to become the producer's "slave." However, in 1947, he worked together with Wallis on the gangster drama I Walk Alone, together with Burt Lancaster —  who would later become his only friend in Hollywood.

But Douglas, full of ambition and restlessness, kept holding up the filming with constant discussions. "That was the beginning of my reputation for being difficult," he wrote in his autobiography.

Kirk Douglas had a mind of his own. In 1948, he turned down a lucrative offer to appear in German director Robert Siodmak's Dostoyevsky adaptation of The Gambler with stars like Ava Gardner and Gregory Peck in the leads. Instead, he worked with the relatively unknown director Stanley Kramer on Champion (1949). The role of the unscrupulous professional boxer who is merciless to both himself and others became Douglas' breakthrough as an actor.

His poor background motivated Douglas to work hard. He enjoyed playing men who struggle to get by, but assert themselves and resort to any means to achieve success.

No Oscar for Best Actor

The filming of painter Vincent van Gogh's biography in Lust for Life (1956) put Douglas' acting talent to the test —  and brought him his first Oscar nomination. That was one of the most painful films he'd ever made, he would later say. Yul Brynner would beat him to the Oscar that year, however.

Douglas would also never receive an Academy Award for a role — but he did get one for his life's work in 1996.

Despite his success, Hollywood had mixed feelings about him earlier in his career. He was headstrong, stubborn and didn't follow the rules. In 1958, he founded his own production company, Bryna Productions. But he lacked the patience and tact to be a good producer.

His marriage to American actress Diana Dill (with whom he had two sons, Hollywood stars Michael, and Joel) had long since ended, and the next woman in his life was German-born Anne Buydens, whom he married in 1954 and stayed with for the rest of his life. "I was lucky enough to find my soul mate […], and I believe our wonderful marriage and our nightly 'golden hour' chats have helped me survive all things," he wrote in celebrity magazine Closer Weekly. They had two sons together, Peter and Eric. 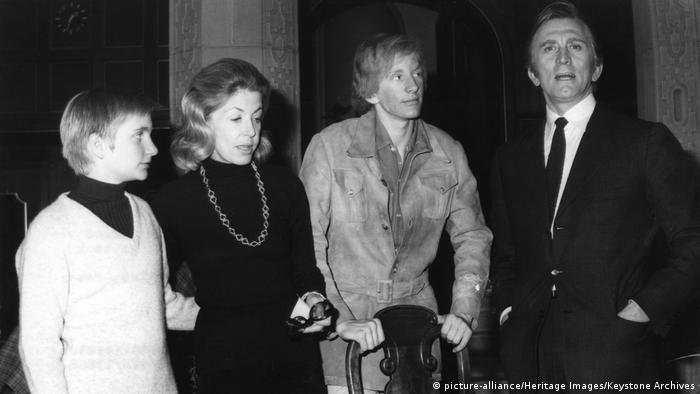 Douglas' spectrum as an actor was enormous. He made political films like Paths of Glory (1957) —  a critical anti-war drama about World War I battles directed by Stanley Kubrick. But he also starred in popular blockbusters like The Vikings (1958) and Spartacus (1960). He produced the latter and caused a scandal in Hollywood by getting Dalton Trumbo, who'd been ostracized in the anti-communist McCarthy era, to write the screenplay.

In 1980 Kirk Douglas started withdrawing from the film world and began writing books. In addition to his memoirs (The Ragman's Son), he also penned novels and autobiographical books that sold well. Together with his wife, he traveled frequently and was active as a UN ambassador.

In 1995, a stroke nearly took Douglas' life. Only after years of therapy was he able to speak again. It would have been a traumatic experience for any actor, but Douglas didn't let it get him down. At least publicly, he seemed to take it with humor and appeared on talk shows to discuss his stroke experience. 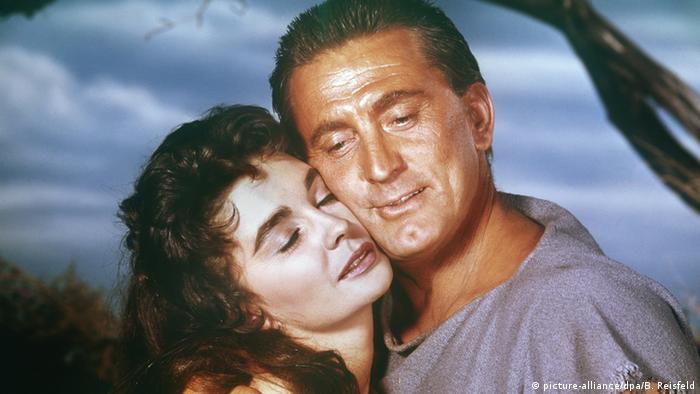 Kirk Douglas as 'Spartacus' and alongside costar Jean Simmons

Return to his Jewish faith

It was during that time that Douglas found his way back to his Jewish faith. He donated a great deal of money to charitable projects in the US and Israel. He and his wife built playgrounds in underprivileged neighborhoods and founded an interfaith pre-school and an Alzheimer's clinic.

Douglas said later in life that he didn't have a problem with his advanced age because our world is a "catastrophe" and the older he got, the closer he became to God.

Later in life, he continued to enjoy his reputation as a legendary actor. At the 2018 Golden Globe Awards, the audience rose to a standing ovation and celebrated the career of Hollywood maestro Kirk Douglas. 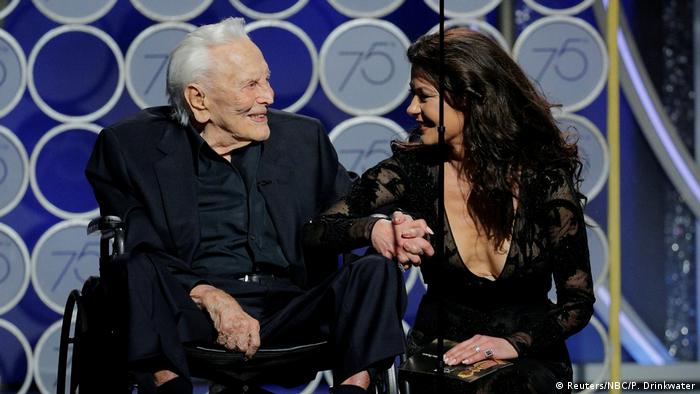 Kirk Douglas and Catherine Zeta Jones, wife of his son Michael, at the 2018 Golden Globes as the Hollywood actor received a standing ovation from the audience

US actor Peter Fonda, the star of cult classic road movie Easy Rider, has died at the age of 79. Born into an established acting family, he carved his own alternative career path. (17.08.2019)

With the 1960s sitcom "Julia," Diahann Carroll became the first black woman to star in her own TV show. On stage, screen and in song, she often played roles once considered the territory of white women. (04.10.2019)