Legal questions over Nazi-seized art | Germany | News and in-depth reporting from Berlin and beyond | DW | 04.11.2013

It's a sensational find: In Munich, roughly 1,400 works of art stolen under the Nazis have been discovered, including works by Picasso, Matisse and Chagall. But to whom do these masterpieces legally belong? 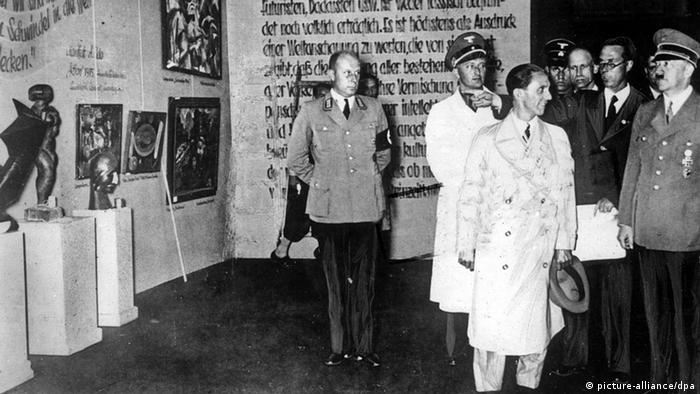 They were found stacked up behind piles of expired canned goods and old boxes: paintings of inestimable worth. The case of these works of art will be handled by lawyers, along with museum directors and experts in stolen art called "provenance researchers," all of whom will be at work on the Munich treasure trove.

For everyone involved, the discovery of the 1,400 works stolen by Nazi officials is nothing short of a sensation. In the history of post-war Germany, an art trove of such magnitude has never been found.

Yet as the German weekly news magazine Focus discovered, German customs officials had already searched and cleared the apartment of Rolf Nikolaus Cornelius Gurlitt two years ago. After a routine check during a train trip, Gurlitt first caught the authorities' attention in September 2010. In his apartment, they discovered a collection of art that took their breath away: paintings by Pablo Picasso and Henri Matisse, by Marc Chagall and Max Beckman, as well as by other giants of art history. 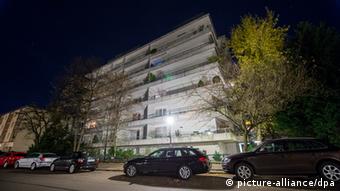 The apartment building where the "billion" in art was hidden

Gurlitt had apparently been stashing the paintings at his home for decades. They were originally owned by his father, Hildebrand Gurlitt, a well-known art dealer who died in 1956. He was the director of the Zwickau Museum and of the prestigious Kunstverein Hamburg during the 20s and 30s and was considered a patron of modern art. After the Nazi party began to systematically seize what it considered "degenerate" art, Gurlitt also lost his job - due both to his involvement with modern art and the fact that Gurlitt was labeled "non-Aryan."

Conforming to the times

But in later years, Gurlitt adapted to the new conditions and cooperated with the "brown shirts" in power. Along with three other art dealers, Hildebrand Gurlitt managed to control the art trade conducted by the Nazis. In 1937, they carried out a notorious exhibition in the Haus der Kunst in Munich showing works that had been seized from museums.

Paintings and sculptures that didn't match the Nazis' worldview - particularly modern works and especially those of German expressionism - had been branded "degenerate" and seized. Gurlitt was commissioned by the Nazi party with the task of selling these works of art, mainly to foreign buyers. 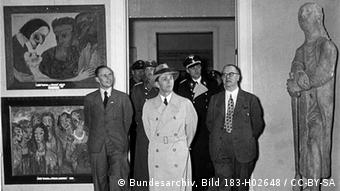 But it is safe to assume that some of the hidden works of art were acquired directly by Gurlitt and the art dealers he worked with, as Dr. Uwe Hartmann, director of the provenance research unit at Germany's Federal Office for Central Services and Unresolved Property Issues, confirmed in an interview with DW.

Amongst the 1,400 works of art that were found, there could very well be pictures that were stolen for other reasons by Nazis in power since 1933 - both within Germany and outside of it. Hitler and Göring collected large quantities of works of art that appealed to them - most of them works by the old masters. Many of the paintings were captured by Germans on military campaigns in eastern and western Europe.

What exactly has been found among the huge art cache in Munich is known only to a handful of experts such as art historian Meike Hoffmann, who has now secretly been researching the collection since its discovery in 2012.

Initial estimations of the art trove's value placed the paintings' combined worth at one billion euros on today's art market. Journalist and art restitution expert Stefan Koldehoff, however, sees reason to doubt that number.

"I'm a little bit skeptical of that sum, since the former owner of the collection, Hildebrand Gurlitt, actually specialized in paper works," he told DW. "Paper works are known not to be worth quite as much as paintings." 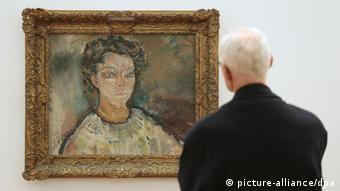 The portrait of Tilla Durieux by Oskar Kokoschka, here at the Museum Ludwig in Cologne

Experts are now asking why it took so long for the discovery of the Munich art trove to be made public. Initial reports in Focus magazine indicated the art stash had been discovered as early as 2011; on Tuesday (05.11.2013), Hoffmann corrected the earlier report and said the paintings had been discovered in 2012.

"It isn't being said that the images in this apartment in Schwabing [in northern Munich] used to exclusively be the property of German museums," Koldehoff said. What Koldehoff means is that many of the paintings might have come from Jewish private collections - a fact that would change their legal status.

"So there is probably a long row of inheritors - some of them elderly Jewish inheritors - who for years have been searching for their former property with expensive lawyers and would have preferred knowing that, for certain works, the search is over."

The processing of the works of art has also put the spotlight on the role of auction houses. They are difficult to sue when they upheld the laws of the time in selling and reselling works of art of unknown origin.

Beyond legal restrictions, however, there are also moral issues. "Morally, it's of course true that Gurlitt was one of the art dealers who was directly and indirectly a beneficiary of the policies of Nazi persecution and expropriation of the Jews," said provenance research director Hartmann.

Koldehoff agrees. "Gurlitt and his son, to whom the pictures now apparently belong, were profiteers of the National Socialist regime. And how to deal with his property and his enrichment under the Nazis that continues until this very day - that is something fundamental that the art world needs to think about."

For some years now, German museums, by comparison, have had a single policy on such issues: "In a collective declaration, public institutions imposed a commitment upon themselves," Uwe Hartmann said. "We'll check our property, and wherever suspicions are substantiated, we'll search for a just and fair solution together." That policy most recently led to the return of Oscar Kokoschka's Tilla Durieux, which had previously been in a Cologne museum.

Things are different in the case of Hildebrandt Gurlitt and his son. The origins of the works that long lay stacked between garbage must be determined one painting at a time. Was the painting stolen by Nazis? Whose hands did it pass through then? Is the painting's case beyond the statute of limitations? After this spectacular find, the work for provenance researchers and lawyers in Germany has only just begun.

Two families and the house in Schönwalde

When Germany was reunified, many West Germans reclaimed properties they had lost under the GDR, meaning many East Germans lost their homes. Today, only a few cases remain: Vanessa Johnston tells us how one was solved. (03.10.2013)

The trial against artist Jonathan Meese for imitating a Hitler salute has been postponed following a legal challenge from the defense. German law makes exceptions for artistic freedom, but was Meese's gesture really art? (18.07.2013)