The left-wing German daily die tageszeitung (taz) has decided to obscure sponsor logos in its sports photos. Deutsche Welle spoke with taz's Steffen Grimberg to find out what the fuss is all about. 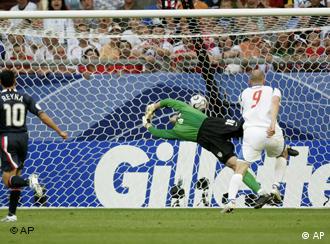 Advertising and sponsorship logos are ever-present in sport

Sponsorship logos and advertising have become part and parcel of soccer matches and other spectator sports. One German newspaper, however, thinks the commercialization of sports has gone too far. Steffen Grimberg, of the left-oriented German paper die tageszeitung (taz), explained to Deutsche Welle why the left-oriented daily has decided to blur out sponsorship logos in its sports photos.

DW: Sponsors' logos on soccer jerseys, or surrounding the pitch, have been common for decades. Why is taz just now deciding to obscure these logos?

Steffen Grimberg: Because we feel it's becoming too much, really. It's been overexaggerated, especially if you look at certain sports like Formula 1 racing or any kind of winter activities like the biathlon where you have athletes wearing coveralls and various bits and pieces covered in sponsors and logos and whatnot. We just wanted to highlight that this is something, of course, that the sponsors like, but we as media have no choice in deciding whether we're going to transport this message, which is in fact some form of advertising, or if we don't do it. Here with our little trick we're trying to show a way where we can still convey the message in the sports picture but get away from the sponsors' logo and the intense advertising.

In some cases your paper has not just removed sponsor logos but also the logos of sports equipment manufacturers, and then elsewhere the three stripes of Adidas have not been obscured. Where are you drawing the line?

Well, those three Adidas stripes should have been obscured. At the moment, the idea is that this is a test period of a fortnight to remove any of those logos or sponsor names in order to show people how much there are of those things. Perhaps because we've become very used to it, it's going unnoticed.

Is it not a newspaper's job to present the world as it is or as you see it, as opposed to presenting it how you would like it to be? 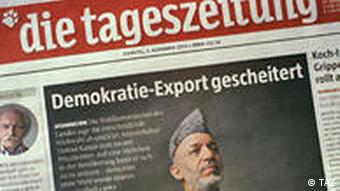 taz believes that the commercialization of sports has gone too far

Yeah, absolutely. And I think we're doing this in a way which is of course, you might say, a bit schizophrenic because by removing these logos we tell people, 'Yes, they're there and there are so many of them, that's why you see so many obscured little bits and pieces.'

Another thing - we had a picture with Felix Magath of Wolfsburg, the coach, sitting in for the post-match press conference and there's this huge wall of sponsors behind him, and we changed all those logos [from] the logos of the VfL Wolfsburg's sponsors to our taz logos, just to tell people [that] this makes a difference. This is something you should be aware of and not take for granted.

Have you considered selling space on teams' jerseys? If you had a company that would want to buy space on taz photos of Bayern Munich players, maybe you would think about selling that?

No, we wouldn't. But, in fact, we are media partners to the local club here, SV Babelsberg, and I'm not too sure what our arrangements are there, whether they could carry taz logos, for example. But this is another thing at taz: we draw a very distinct line between what the company is doing, what our marketing folks are doing and what we are doing editorially. So it may be that folks at SV Babelsberg are carrying proudly - hopefully - the taz logo on their equipment and on their sports gear, but that doesn't prevent us in editorial from doing the opposite thing and telling people that we feel this has gotten out of hand and that sponsorship in sports these days plays such an important role, and we should be more aware of it.

taz is quite well known in Germany as being a provocative newspaper, with provocative headlines and layout, and for doing some innovative things. Is this a typical taz stunt?

I'd say it's more than just a stunt. Of course it has these elements of being provocative, of being perhaps a bit shocking, doing the out of the ordinary thing. As I said, by leaving something out, we're telling people how much of it there really is. We as a paper, for example, haven't yet decided for how long we'll be continuing this little stunt - if you'd like to call it that. This will also depend on what our readers say and at the moment their reaction is, I'd say, overtly positive.

Advertising is big business in the German Bundesliga, and solar companies are getting on board - and on jerseys and stadium roofs. Chinese firms are leading the way. (06.08.2011)

New CEO suggests Puma goes back to its roots

German sportswear giant Puma is switching bosses - and perhaps focus. Incoming CEO Franz Koch says Puma will be making a greater distinction between sports and fashion, a move that could have consequences for old rivals. (15.04.2011)

FIFA has brought charges over 36 women who wore the same orange dress to a world cup match - but not against the women wearing the dresses. (17.06.2010)