Lebanese state media said that arms stored for Hamas caused the explosions, but the militant group blames an electrical fault in a store containing oxygen supplies for COVID patients. 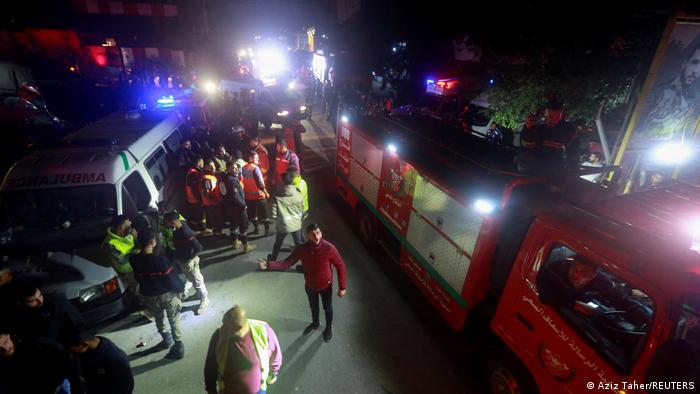 Several explosions rocked a Palestinian refugee camp in the Lebanese port city of Tyre on Friday night, injuring about a dozen people, rescue workers on the scene said.

The explosion occurred at a reported Hamas weapons depot, according to Lebanon's state media and security sources quoted by Reuters news agency.

Lebanon's state-run National News Agency said there were an unspecified number of deaths from the blast. But local media and civil defense workers claim there were no fatalities.

Initial reports suggested the incident began with a fire in a diesel tanker before the blaze spread to a nearby mosque controlled by Hamas.

Footage shared by local media showed a number of small, bright red flashes above the port city, followed by a blast and the sound of glass shattering.

What caused the explosions?

A number of Palestinian groups, including Hamas and Fatah, control Palestinian camps in the south of Lebanon. By custom, Lebanese state authorities do not enter these territories.

Beirut-based journalist Anchal Vohra told DW that Hamas does keep weapons in these camps, although the size of the weapons depots is unclear.

She added that this is one of the biggest Palestinian camps in the south of Lebanon, of which there are around a dozen. "It is one of the more congested camps of Palestinian refugees in Lebanon," Vohra told DW.

The militant group, however, rejected the claims, saying the blast was the result of an electrical short circuit.

"After examining the circumstances, it became clear to us that it was caused by an electrical short circuit in a warehouse containing a quantity of oxygen and gas cylinders designated for coronavirus patients," the militant group said in a statement on Saturday.

"The fire damaged some properties and losses were limited," it added.