Lebanon is the only country in the Middle East that consistently elects a Christian head of state, but a fight over cabinet positions is worrying some. Juliane Metzker reports from Beirut. 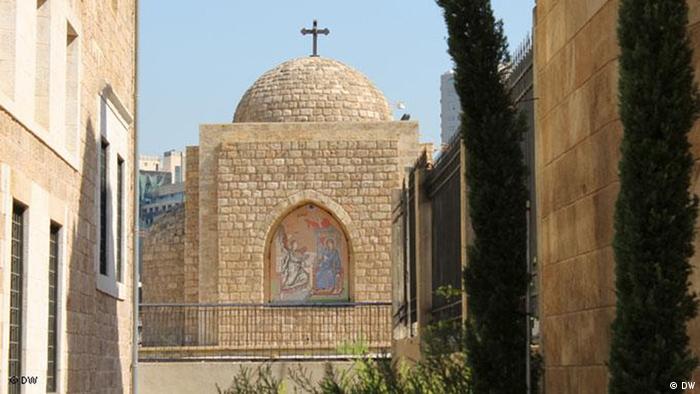 Dozens of cars, full of young men and women waving bright orange flags, are in a traffic jam in the government district of Beirut on a hot Thursday morning. They are all supporters of the Christian Free Patriotic Movement (FPM), and they are gathering for a protest.

"We are here to protect the rights of Christians in Lebanon," says the 23-year-old student Joel. Together with a girlfriend, she is holding up a large poster of FPM party leader Michel Aoun. "The people up there cannot keep making decisions over our heads," adds Anton as he joins the girls. Those "up there" are the members of the Lebanese cabinet, which is meeting less than 100 meters (110 yards) away, in the Grand Serail, the headquarters of the Lebanese prime minister. Demonstrators are demanding that Lebanon finally get a new president, but not just any president - they want their president, and they are screaming at the top of their lungs: "God, Lebanon and Aoun; we don't need more than that!"

Lebanon is ruled under a so-called consociational democracy in which cabinet positions are allocated according to religious affiliation. Thus, the head of state is a Maronite Christian, as the Maronites make up the largest Christian community in Lebanon, alongside Orthodox Christians and Catholics. However, since the end of President Michel Suleiman's term in May 2014, governing parties and opposition have been unable to agree upon a candidate to fill the vacancy. "Michel Aoun, who would like to be president, is trying to mobilize Christians for his cause by telling them that the government is taking away their rights," says Lebanon expert Mario Abou Zeid of the Carnegie Middle East Center in Beirut.

With such claims, Aoun is stoking the fears of Lebanese Christians that look with dread to Syria and Iraq, where Islamic State is brutally persecuting those who share their faith. In the face of the catastrophic situation in the Middle East, Christian parties want to avert any loss of power in Lebanon at all cost: "The Lebanese president is the only Christian head of state in the entire Middle East. In light of religiously motivated persecution, Lebanon represents the last hope for Christianity on the Arabian Peninsula," says Abou Zeid.

All of those hopes are pinned to a simple fact: the political influence of Lebanese Christians is anchored in the 1989 Taif Agreement, which ended Lebanon's 15-year-long civil war. In the accord, Muslims and Christians agreed to an even 50/50 representation in the Lebanese parliament. Theoretically, this should guarantee a balance of power. However, that balance could be jeopardized by the fact that the Taif Agreement was never fully implemented. That has been due, in part, to the Syrian government, which did not remove its troops from Lebanon until 2005. During that time, the Maronites suffered greatly at the hands of the Syrians, as retribution for having fought against the Syrian army toward the end of the civil war. The result: Aoun, who at the time led a war "of liberation" against the Syrian occupation, fled into French exile, where he remained for 15 years. His adversary, Samir Geagea, the leader of another Christian militia, was sentenced to a long prison term. 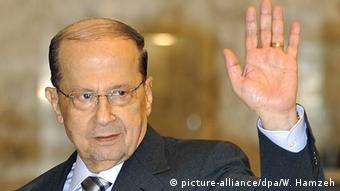 Aoun is playing on the fears of Lebanese Christians

"No one was free from guilt in the civil war. Christians had to bear the consequences of that too," says Maroun. The 72-year-old sits about a kilometer away from the Grand Serail, in his dimly lit automobile repair shop. A gold cross dangles from his necklace. Pictures of his son, daughter-in-law and grandchildren hang on the wall behind him. The family lives far away, in America, where Maroun's eldest son went after the war.

Many Christians emigrated between 1990 and 2005 because of Syrian repression. In order to protect the quotas in the Taif Agreement, Christian institutions implored emigrant families to register their nationality and religious affiliation before departing.

Success was moderate. Studies show that Christians constitute about 40 percent of the total population of Lebanon today - less than half of what they made up not even a century ago. This demographic shift and the vacant presidency could play into the hands of Lebanon's Shiites and Sunnis. The governing Shiite party, Hezbollah, has already suggested changing the constitution to create a three-way balance of power between Christians, Shiites and Sunnis.

The fact that the constitution is malleable in times of political crisis was made evident last year when parliament voted to extend its term until 2017. The commander of the army's mandate was also renewed - a bone of contention between the government and Aoun, who would like to see his son-in-law in the job. Sunni Prime Minister Tammam Salam refuses, however, to stage new elections at this point in time - which is why FPM ministers are threatening to block the work of the cabinet. Beyond that, their members have also begun boycotting presidential elections. Abou Zeid finds the FPM decision extremely counterproductive in terms of Aoun's declared goals: "They tell the Christians that their rights are being taken away, but at the same time they are reducing Christian representation in parliament and in the cabinet. They are marginalizing themselves politically."

Prior to the FPM confrontation, there was some hope that another aspect of the political crisis might soon be solved. Michel Aoun and Samir Geagea, now head of the Christian Lebanese Forces (LF), laid to rest their 30-year rivalry. During the civil war, the two brutally fought one another, and after 2005 they dragged their fight into the political arena. Geagea is also a presidential candidate. Together, they suggested that Lebanese Christians should vote on who they would prefer to have as president.

Maroun says he wouldn't vote for either of them. He watches the pro-Aoun demonstration on the flickering screen of his dusty little television and shakes his head. The civil war and what followed taught him one thing: "Religion and politics don't belong together. Christianity is not a protest march. I am Lebanese first, then Christian. I expect the same from my president."

The car of a group of Czech nationals was discovered close to an army checkpoint in a popular tourist village. The group's passports, cash and other valuables were still inside, and their driver is also missing. (18.07.2015)

The German foreign minister has visited Beirut to discuss the Syrian refugee crisis and to support Lebanon in its efforts housing refugees. Steinmeier is hoping for a joint US-Russian initiative in the Syrian conflict. (15.05.2015)

Sectarian fighting in northern Lebanon's Tripoli long predates the violence in Syria. Yet, as violence presses on in Syria, locals say they are "tied to the map" of the region. Patrick Strickland reports from Tripoli. (10.04.2015)