Leading German politician could face investigation for ′Nazi′ phrase | Germany | News and in-depth reporting from Berlin and beyond | DW | 10.03.2011

Horst Seehofer, the leader of the Christian Social Union, caused a storm when he used a National Socialialist phrase in a recent speech. Another politician has reported him to the police for inciting hatred. 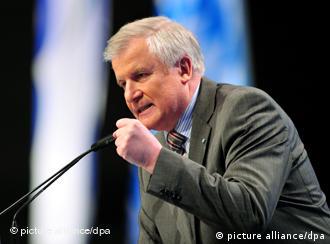 Seehofer is accused of using a Nazi turn of phrase

A German politician has reported Bavarian State Premier Horst Seehofer to the police for inciting hatred. He's accused of using a turn of phrase with National Socialist overtones.

"I want to see, if the speech constitutes the criminal offence of sedition," Ulrich Kaspari, who until 2009 was a state secretary in the Transport Ministry for the Social Democrat party, wrote in his internet blog.

"In my opinion he crossed the line, which a democrat should not cross," he added.

Seehofer said at a political rally on Wednesday that his Christian Social Union (CSU) would "resist until the last bullet", in order to stop immigration into the welfare system.

Kaspari claims that this phrase "significantly" disturbs the public peace.

The phrase "defend until the last bullet" was used in the battle of Stalingrad in World War II and by Adolf Hitler in spring 1945 during the battle for Berlin.

The leader of the opposition Greens in Bavaria, Dieter Janecek, also voiced his outrage.

"Germany is not Stalingrad, the CSU is not the German army and immigrants are not the Red Army," he said.

Bavaria's Christian Social Union, part of Germany's ruling coalition, voted at a party conference to take a tough line against immigrants who fail to integrate. The party's leader hit back at accusations of extremism. (31.10.2010)