Plaintiffs' lawyers in a case against the so-called "bookkeeper of Auschwitz" have condemned a prosecution sentencing demand as too low. Oskar Gröning is accused of complicity in the murder of 300,000 people. 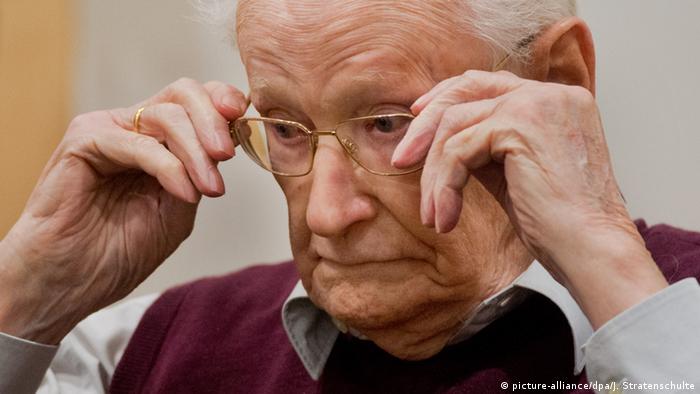 Lawyers acting for the joint plaintiffs on Wednesday strongly criticized the sentencing demand of three-and-a-half-years for Gröning's alleged complicity in the deaths at Auschwitz.

Christoph Rückel told the court that the sentence proposed by state prosecutors a day earlier was "unacceptable," given the scope of the allegations leveled against Gröning. He did not, however, specify a concrete demand for the length of sentence.

Charges against Gröning, the so-called "bookkeeper of Auschwitz," relate to the "Hungarian Operation" between May and July of 1944, when around 425,000 Jews were transported from Hungary to the camp. Gröning has admitted working at Auschwitz-Birkenau in 1944 when he was just 21 years old. He says his duties included collecting luggage and valuables from prisoners, as well as working on the ramp where Nazi guards sorted new arrivals into those fit for work, or to be sent to the gas chambers.

The sentence demand was also criticized by the vice president of the International Auschwitz Committee, Christoph Heubner. Such a sentence, he said, would represent "six minutes and thirteen seconds imprisonment for a human life."

"The level of the requested sentence is not even symbolic," said Heubner. "It must leave a bitter taste in the mouths of survivors:"

Regardless of the outcome, lawyer Rückel said that the case had been of "paramount importance" for those affected, allowing victims to once more put a face to their tormentors.

Gröning has denied ever personally committing any atrocities, although has talked of his "moral guilt."

Lawyers are upset that it has taken so long to get Oskar Gröning to court, particularly considering how frank he has been about serving at Auschwitz.

Another of the plaintiffs' lawyers, Cornelius Nestler, on Wednesday condemned the failure of German authorities to prosecute Gröning over decades, saying it should have taken place much earlier.

Gröning's refusal to admit criminal responsibility and apologize to victims has angered survivors, with lawyer Thomas Walther lamenting the missed opportunity. Auschwitz survivor Hedy Bohm said on Tuesday she was disappointed Gröning had not said he was sorry, and argued that no prison term could atone for what happened at the camp.

"The sentence has no meaning. It's too late anyway," she said.

A verdict in the case could be handed down as early as next week.