Abdullah has closed the game, but the incumbent remains on track to win Afghan's second direct presidential election. But allegations of voter fraud continue to be a source of concern. 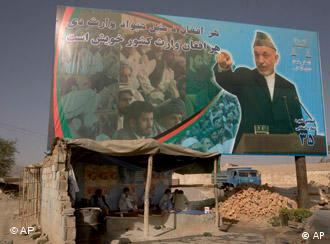 President Hamid Karzai remains on track to win the most votes

The votes from 47.8 percent of Afghanistan's polling stations have so far been counted, but there is broad concern about what seems to have been an extremely low turnout and allegations of fraud.

Karzai has 45.9 percent of the votes counted so far, while his former foreign minister, Abdullah Abdullah, has 33.2 percent.

The latest results narrowed the previous gap between them to 12.6 percent, from 14.8 percent. To avoid a runoff, Karzai will need to get 50 percent of the total votes counted, plus one. Most of the ballots counted so far have come from the country's north, where Abdullah is the more popular candidate. But observers say yet-uncounted votes from provinces in the south - where Karzai's ethnic group, the Pashtuns, predominate - could put him over the top.

Afghanistan's Electoral Complaints Commission told AFP that it is trying to investigate nearly 700 allegations categorized as "Priority A," meaning that they could potentially affect the final election outcome and must be investigated before officials certify the final results. The Commission has logged 2,097 complaints since election day on August 20.

The results have also point to a turnout of just 30 to 35 percent, adding to fears about the election's legitimacy.

Abdullah has accused Karzai of tampering with the election and said he would look into legal ways to counteract what he has called "state engineered fraud."

Germany has just over 4,200 Bundeswehr troops in Afghanistan as part of the NATO-led International Security Assistance Force. Most of them are serving in the northern provinces around Kunduz and Mazar-i-Sharif

As allegations of massive election fraud mount, Afghanistan's presidential poll is beginning to resemble a train wreck. A hopeful process, which was marred by irregularities and security concerns, has now been derailed. (27.08.2009)

No timetable for German pullout from Afghanistan, says Merkel

Chancellor Angela Merkel says German troops will stay in Afghanistan until their goals are achieved, but her foreign minister - and challenger in the upcoming elections - has suggested he'll be seeking an exit strategy. (25.08.2009)

Afghanistan's landmark elections this week were generally good and fair, but not free in some parts of the country due to violence and intimidation, the chief EU election observer said Saturday. (22.08.2009)