Landmark vote on mines leads to rethink in Israel | News and current affairs from Germany and around the world | DW | 04.04.2011

Landmark vote on mines leads to rethink in Israel

A Landmark vote by the Israeli parliament has created legislation that will demine decades-old landmines in the Golan Heights. The estimated one million landmines have injured hundreds of civilians over the years. 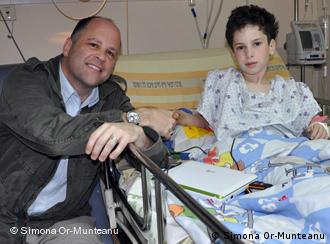 Jerry White visiting Daniel Yuval in the hospital after Daniel's injury caused by a landmine.

To the Israelis who live around the Golan Heights, fences and placards with landmine warnings are as commonplace as road signs and traffic lights. Until now, the residents have taken for granted that the large tract of land, littered with an estimated one million landmines, was a necessary part of ensuring security against intruders.

But, on the annual UN Landmine Awareness Day, residents who live in Israel, Syria and Lebanon, were given something other than just warnings. They learned about the landmark legislation that aims to get rid of ticking bombs once and for all.

"There is no security if your children go to play in the snow and get blown up," Jerry White, co-founder of Survivor Corps and recipient of the Nobel Peace Prize for the International Campaign to Ban Landmines, told Deutsche Welle. "An 11-year old boy blew up that myth."

Part of what makes the landmine legislation unique is that it was pushed through by an unlikely team: White, a 46 year old American and Daniel Yuval, an 11-year old Israeli boy. The duo couldn't come from more different worlds, but they do have one thing in common - they are both landmine survivors.

In February of 2010, Daniel was with his family, throwing snowballs in the Mount Avital Nature Reserve on the Golan, when he suddenly stepped on a landmine. Within seconds, the boy's life changed forever. It is a similar experience to the one White had in the same area 27 years earlier.

"I was 19-year old student from Brown University, studying in Jerusalem when I went camping during Passover in the Golan Heights," recalled White. "I stepped on a landmine and ended up in the hospital, having lost a leg."

Yet, instead of being crippled by their loss, both White and Daniel decided to become active. White's involvement in the campaign to ban landmines led him around the world, raising public awareness and urging governments to start demining their land. He led Princess Diana through Srebrenica and worked with Jordan's Queen Noor to spearhead a mine-free Middle East.

But, as he was championing the demining progress around the world, White also kept his eyes on Israel, hoping one day he could convince the government in the country of his own injury to join the effort. 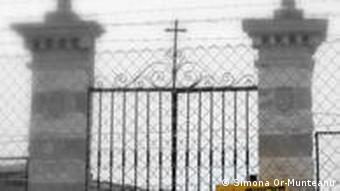 Mined monastery at the baptismal site of Jesus

"Five years ago, I started to knock on the doors of Israeli officers and Ministers of Defence asking why they couldn't clean up if others were," said White. "They looked at me with suspicion, like 'Why you? Who sent you here'"?

Still, White started to lay the groundwork for political change. He teamed up with Israelis to lobby the government, conduct studies and prepare reports to inform the public.

Reaching out to residents

Activist Dhyan Or joined White and now manages Survivor Corps in Israel, coordinating the Mine-Free Campaign. It is a campaign that seemed to be a last priority in a country dealing with constant conflict.

"Before we could start this legislation process, we had to change the public debate around mines," Or told Deutsche Welle. "The fact is most of the world has abandoned this weapon. It is not strategic and hurts only civilians."

Over the decades, landmines in the area have injured hundreds of people and, in some cases, have taken lives. But, it wasn't until Daniel's injury that the public joined Or and White and appealed to the government for change.

"It is his image that convinced people that we need to clear the landmines," said Or.

The change didn't just come from his image, which was plastered on billboards and re-run through various media outlets, but also Daniel himself.

"His view is it is good that it happened to him because he felt that he was able to do something about it."

And, he did. Just over one year after Daniel's injury, 73 out of 80 Israeli parliament members co-sponsored 'Daniel's Bill,' which created a National Mine Action Authority. According to the legislation, the Army will inform the government which minefields are non-operative, so the demining process can begin.

The land can then be used for farming and development, as well as serve as a safe place for children and adults to walk.

"It has been a very long road," said Or. "Some of the people who advocated for mine clearance have been doing this for more than 20 years without any result."

For White, it is a road that has finally come full circle.

"I have a deep sense of release, a release of the past and faith in the future. When the vote passed that day, there was a tear in my eye and a smile on my face. It was a deep satisfaction."

A report by Handicap International and the Campaign to Ban Landmines has shown that, ten years after a treaty to ban landmines came into force, the situation of survivors has improved little. (02.09.2009)

Report compiled by Survivor Corps that includes pictures and graphs of where the mines are located, background information on landmines as well as legislative action.