Opponents of Kyrgystan's interim government seized control of administrative buildings in the south of the country. A government spokesperson said it was an attempt by supporters of the outsted president to regain power. 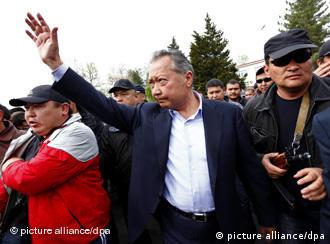 Bakiyev was removed from power during apopular revolt in April

Supporters of toppled Kygryz President Kurmanbek Bakiyev stormed administrative buildings, took a local governor hostage and attempted to seize an airport in what authorities are calling an attempted coup.

Bakiyev supporters seized control of government buildings in the cities of Osh, Jalalabad and Batken, and kidnapped the governor of the Jalalabad region. They also attempted to seize the airport in Osh, where demonstrators unfurled a banner proclaiming "Bakiyev - Our President," five weeks after the former president was forced into exile.

The southern region of Kyrgystan is considered a stronghold of the fugitive ex-president. 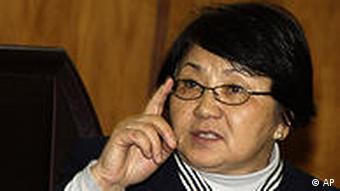 Otunbayeva has vowed to restore order

No deaths were reported, but the revolt represents the biggest challenge to the interim government since Bakiyev was removed from power in a violent coup in April.

The leader of the interim government, Rosa Otunbayeva, vowed to restore order.

"We have what it takes to dispel the fear existing among the public," Interfax quoted her as saying.

The impoverished central Asian country is home to both a Russian and an American military base. The American airbase in Bishkek is used to supply US troops fighting in Afghanistan.

Following the popular revolt that stripped him of his office, Bakiyev fled to Belarus, where the government has refused to extradite him to face charges in Kyrgyzstan. Belarus on Thursday that all of its diplomats had left Bishkek due to security concerns.

Kyrgyzstan is to hold elections on October 10, after a referendum on changing the constitution to reduce the powers of the president, the interim government said. (22.04.2010)

Toppled Kyrgyz president Kurmanbek Bakiyev is in Minsk, the Belarusian capital, according to the country's president Alexander Lukashenko. Meanwhile, the Kyrgyz interim government sent in troops to quell fresh riots. (20.04.2010)

Five killed in new wave of violence in Kyrgyzstan

Authorities in Kyrgyzstan have attempted to restore order after five people were killed in riots. Meanwhile, it is unclear where the ousted former president is located. (20.04.2010)