Five killed in new wave of violence in Kyrgyzstan | Europe | News and current affairs from around the continent | DW | 20.04.2010

Five killed in new wave of violence in Kyrgyzstan

Authorities in Kyrgyzstan have attempted to restore order after five people were killed in riots. Meanwhile, it is unclear where the ousted former president is located. 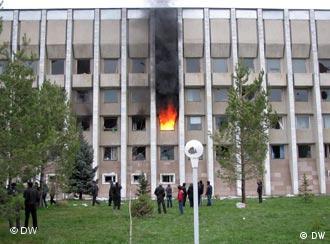 Bouts of unrest have followed the early April uprising

In a fresh round of violence in Kyrgyzstan, on Monday hundreds of police officers were dispatched to suppress riots that started in a village outside of the capital, Bishkek.

Ethnic Kyrgyz rioters seized plots of land from Russians and Turks in the village of Mayevka, and in the subsequent violence five people were killed and many others injured.

"The crowd poured into Mayevka and started wreaking destruction, robbing and killing. They mainly robbed and burned the homes of Turks living in the village," Alexander Konstantin, a local resident, told journalists.

"All the provocateurs and ringleaders in the riots will be punished to the full extent of the law," the interim government said in a statement released on Tuesday.

On Monday, loyalists of the former president installed a pro-Bakiyev governor after seizing a regional government in Jalalabad.

Toppled President Bakiyev was flown to Kazakhstan last week in an attempt to reduce the risk of civil war in Kyrgyzstan.

A spokesperson for the foreign ministry in Kazakhstan confirmed to the AP news agency that Bakiyev had left the country, but provided no further details about where he had gone.

Bakiyev is wanted by the interim Kyrgyz government in connection with the shootings of demonstrators during the protests in early April that culminated in his overthrow.

Kyrgyzstan's interim leader said her government would do everything possible to prevent civil war as the European Union made plans to send its top Central Asia representative to the country to assess the situation. (09.04.2010)

Mourning in Kyrgyzstan capital, unrest in the country's south

Tears and tension reigned in Kyrgyzstan as people in the central Asian nation began to bury those killed in Wednesday's bloody revolt. The uprising ousted President Kurmanbek Bakiyev, although he refuses to step down. (09.04.2010)

Anger at corruption and rising prices fueled violence in Kyrgyzstan

Violent clashes between police and protestors broke out on Wednesday in Kyrgyzstan. The protests are in response to the country's endemic corruption and the rising cost of living. (07.04.2010)