Kurdish Issue in Turkey Unresolved | News and current affairs from Germany and around the world | DW | 11.02.2005

Following a trip to Turkey, an international delegation has deemed the country unfit to join the EU. With regard to the Kurdish issue, it concluded that the improvements were merely theoretical. 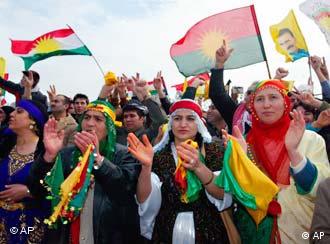 Turkey still has to resolve its Kurdish issue

A report by the delegation of international lawyers claims that the official representation of problems such as the Kurdish issue are "largely euphemistic, if not totally false". The report, to which DW-WORLD has access, said that while Turkey has made many attempts towards becoming a democratic state, there is still a long way to go in putting reformed laws into practice.

Turkish human rights activists stressed to the delegation that "there has been no fundamental change in the mentality and thinking in the Turkish government and state apparatus." They said the Turkish government has to develop a far-reaching program for the political, socio-economic and cultural equality for the Kurdish people.

"And as long as they are not willing to do so, there can be no recommendation that they join the EU," the report said. They called for the establishment of a commission comprising NGOs from both Turkey and EU nations to oversee reforms relating to human rights in Turkey. 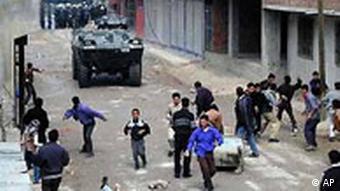 The Kurdish issue rages on in Turkey

The six-person delegation, comprising of high-ranking German and South African lawyers, traveled to Istanbul and Ankara in the middle of January where they conducted numerous conversations with human rights activists, representatives of Turkey's ruling AKP party and members of parliament.

The lawyers stated that neither the government, the military or other political parties show a fundamental shift in thinking on the Kurdish issue, and concluded that the official policy is still a long way off recognising the Kurds as equals with the same rights and freedoms.

Despite certain legal changes, the Kurdish language is still widely repressed. There are no Kurdish radio or TV stations and the two weekly half-hour programs on state television, which are repeatedly cited as progress on the Kurdish issue, amount to nothing more than propaganda which has been translated into Kurdish. "Nobody watches them," one of the lawyers said. In addition, there is still a law in effect which bans political parties from using any language other than Turkish.

The lawyers have called on the EU to make the Kurdish issue a central element of their negotiations. The influence of the EU in accession talks is the most effective factor for a peaceful and politically correct solution to the issue.

During their trip, the lawyers also sought to gain an impression of the conditions in which former chairman of the Kurdistan Workers Party, the PKK, Abdullah Öclan, is being held captive on the island of Imrali. In a ruling in March 2003, the European Court of Justice for Human Rights deemed the trial against Öclan unfair. The Turkish government, however, launched an appeal, and a decision on the issue is expected this spring. 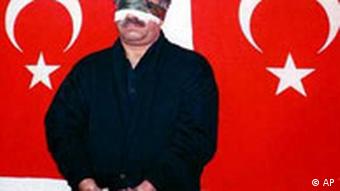 Abdullah Ocalan, fugitive chief of the Kurdistan Workers Party, PKK, stands blindfolded and handcuffed in front of Turkish flags before being interrogated by Turkish officials at the prison-island of Imrali in this photo provided by the Turkish Intelligence Service on Thursday, Feb.18, 1999. Ocalan was captured by Turkish commandos Monday evening, Feb. 15, in Nairobi, Kenya. (AP Photo/Turkish Intelligence Service-MIT/Anatolia)

In the eyes of the human rights activists, there has been no change in Öclan's prison conditions. The lawyers are involved as international observers in the Öclan appeal case and were dissatisfied with the Turkish Justice Minister's refusal to accept a visit from the delegation for "reasons of security".

They claim that Öclan is in solitary confinement, and that his relatives and lawyers are prevented from visiting him. Isolation, they said, is white torture and capable of breaking the personalities and wills of political prisoners.

The report, which is due for publication later this month, says that Öclan's case is a "indicator for the credibility of the development of human rights in Turkey". It concluded that Öclan's prison conditions have to become a central point in EU accession talks.

She had to wait almost a decade for this moment, but on Thursday Leyla Zana was in Brussels to thank the European parliament for the Sakaharov prize, awarded to her in 1995. (Oct. 15, 2004)

For over 13 million Kurds living in Turkey's southeast, EU membership is a chance for more democracy in their conflict-weary region, where many fear a return of violence and unrest if Ankara is denied entry. (Dec. 15, 2004)

The European Court of Human Rights this week takes up the fate of Kurdish leader Abdullah Öcalan. Both Ankara and Öcalan's lawyers are appealing portions of an earlier court ruling that he did not get a fair trial. (June 8, 2004)