The United Nations has condemned the bombing of a hospital in Kunduz, Afghanistan, saying it could amount to a war crime. The airstrike at a Doctors Without Borders facility killed at least 19 staff and patients. 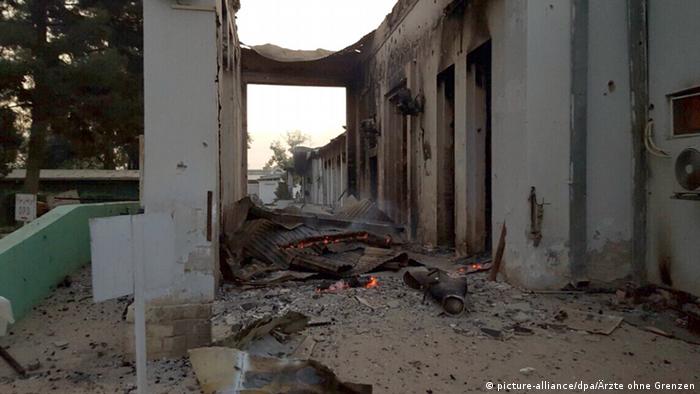 The medical charity Doctors Without Borders - or MSF - said "12 staff members and at least seven patients, including three children, were killed [and] 37 people were injured" in an attack on a hospital it operates in the northern Afghan city of Kunduz on Saturday.

"This attack constitutes a grave violation of international humanitarian law," MSF said, adding that "all indications currently point to the bombing being carried out by international coalition forces." MSF has demanded "a full and transparent account."

The UN human rights chief Zeid Ra'ad Al Hussein said that if an investigation found the hospital was purposefully targeted, the incident could constitute a war crime.

In a statement released on Saturday, he called the incident "tragic, inexcusable and possibly even criminal."

"If established as deliberate in a court of law, an airstrike on a hospital may amount to a war crime."

MSF staff said the attack had gone on for some time after officials in Washington and Kabul had been informed and that both US and Afghan forces knew where the hospital was located. The hospital is the only medical facility in the entire northeastern region of Afghanistan that can cope with serious injuries.

NATO has conceded that US forces supporting Afghan troops against the Taliban may have been behind the strike. "The strike may have resulted in collateral damage to a nearby medical facility. This incident is under investigation," it said in a statement.

US Secretary of Defense Ash Carter also said a US investigation was under way. "The area has been the scene of intense fighting the last few days. US forces in support of Afghan security forces were operating nearby, as were Taliban fighters," he said in a statement.

Afghan forces backed by US airstrikes have been battling Taliban insurgents who seized the strategic city of Kunduz three days earlier in their biggest foray into a major urban area since the US-led invasion of 2001.

According to the Afghan Defense Ministry, armed "terrorists" had entered the hospital compound and used "the buildings and the people inside as a shield" while firing on security forces.