NATO forces and Serbian officials have reached an accord on the disputed crossings in Kosovo's north. The government in Pristina, however, has rejected the deal out of concern that its sovereignty could be weakened. 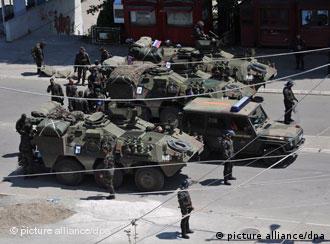 Kosovo's ethnic Albanian government has rejected a deal that would keep two disputed border posts in the Serb-dominated north under the control of NATO peacekeeping forces after a series of violent ethnic clashes flared last week.

An ethnic Albanian police officer was shot dead and a border post set on fire in the subsequent violence, which forced NATO peacekeepers to intervene in order to quell the unrest.

"Roadblocks will be removed and freedom of movement will be reestablished," the NATO-led peacekeeping mission, Kosovo Force (KFOR), said in a statement.

Kosovo's government called the draft agreement "unacceptable and unfeasible." The government in Pristina wants to deploy its customs officials at the border posts in order to enforce an import ban against Serbia.

The import ban is the latest row in a trade dispute that began when Kosovo declared its independence from Serbia in 2008. Belgrade refuses to recognize Kosovo as a sovereign state and has blocked Kosovo's exports.

Although Kosovo is 90 percent ethnic Albanian, around 60,000 ethnic Serbs live in the politically volatile north and still consider Belgrade their capital.

Northern Kosovo has seen its worst violence in several months with fighting over border controls between ethnic Serbs and Albanians. The EU hopes to mediate, but hostile attitudes are deeply entrenched. (02.08.2011)

A week after clashes between ethnic Albanians and Serbs over border crossings in Kosovo, NATO has decided to send hundreds more troops to the area. Meanwhile the EU is continuing mediation efforts. (02.08.2011)

Serbia has said Kosovo wants to create a political fait accompli by trying to seize two border checkpoints with force. Meanwhile, a NATO convoy was unable to reach its soldiers due to a blockade by ethnic Serbs. (31.07.2011)