Knitting Their Way Into the Record Books | News and current affairs from Germany and around the world | DW | 05.06.2006

Knitting Their Way Into the Record Books

World Cup fever is rising all over Germany as the starting whistle gets closer. One town has knitted what they're calling the world's longest soccer scarf, more then 12.5 kilometers long. 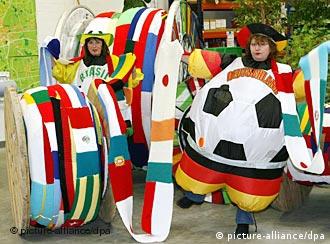 The giant scarf was unrolled at its debut

Some 1,000 people worked on the scarf, which was knitted in the colors of the 32 competing nations. On Sunday in the town of Unna in Westphalia, the fuzzy creation was unrolled, snaking its way a full 12.5 kilometers (7.8 miles) through the town center.

"Just the wool alone cost us around 22,500 euros ($28,900)," said Elfriede Blees, the initiator of this great knit-off, who hopes the scarf will get an entry in the Guinness Book of Records.

She first started her scarf campaign in July 2005 and was astounded by the support she found. Packages with parts of the scarf came from all over Germany and even people from abroad put their knitting needles to work.

But what took almost a year to put together will quickly be taken apart once the tournament begins. Blees and her assistants will sell parts of the work for from 10 to 20 euros and donate the proceeds to sports clubs in Germany and other countries.

Given the unseasonably cool temperatures in Germany recently, perhaps Blees' scarf will be in even higher demand than she thinks. However, meteorologists have promised that the mercury will start inching upwards in the days before the event gets underway.

Here's hoping the bits of the huge scarf sold will only be decorative accessories, and not actually be needed by fans to keep warm.

World Cup sponsors McDonald's and Coca-Cola are accused of violating German laws on drinks packaging and recycling with their special edition cola bottle in the shape of a soccer ball. (June 2, 2006)

Not content with being rounder than any other soccer ball ever created, the Teamgeist Berlin -- the official ball of the World Cup final -- will also be golden. (April 19, 2006)

Bad news for German soccer fans: Olli K. and Michael B. will not be bringing pleasure to supporters during the World Cup. And as for England, their fans can forget about any buzzing performances from a certain David B. (May 25, 2006)