Klinsmann Stokes Fires of Speculation by Discussing US Job

Jürgen Klinsmann's next move has been the subject of much speculation since the end of the World Cup. The man himself spoke up Friday and revealed that he was in informal talks with the US Soccer Federation. 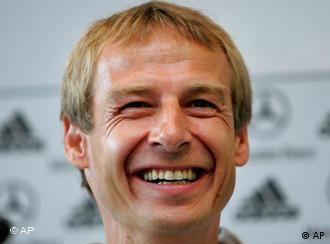 Klinsi has plenty to smile about

Will he or won't he? That's the question that is looking closer to being answered Friday regarding the employment status of former Germany national soccer coach Jürgen Klinsmann.

Ever since the tear-stained departure of the man known and loved as "Klinsi" from the Germany set-up, a nation's thanks ringing in his ears and some carefully removed knives from his back returned to their rightful owners, rumors have been circulating that Klinsmann could take over the US national team.

These rumors, buffeted by counter-speculation that Klinsi was considering the slightly more spicy allure of Mexico a little further south of his California home, have gained some credibility after reports revealed that the former Stuttgart, Inter Milan and Tottenham striker is in informal talks with the US Soccer Federation (USSF).

Words from the man himself about the meeting with USSF president Sunil Gulati hint at a possible deal in the making: "We've had a couple of conversations. I'm evaluating everything that comes up," said Klinsmann in an interview with the Associated Press. "I'll stay in touch with Sunil and see what it leads to. It's a very casual and relaxed correspondence."

"Sooner or later, I have to get back into coaching," he added. 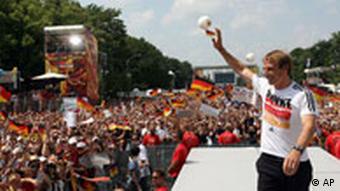 Klinsmann left a nation in rapture

Gulati, who has refused to comment on his talks with any potential replacement, repeated on Thursday that he hopes to have a new coach in place by the end of the year.

Klinsmann resigned as Germany coach three days after the World Cup after leading Germany to the semi-finals where they lost to eventual winners Italy. His German team kept the party going for one more game by beating Portugal in the third place play-off before Klinsi announced that he wanted to spend more time with his family in Los Angeles.

US lifestyle a problem for DFB, not so for suitors

Klinsi clashed on a number of occasions with the hierarchy at the Germany Football Federation (DFB) over his refusal to move back to the country of his birth before the World Cup. Instead, Klinsmann chose to commute, stirring anger in many traditionalists in the game.

Such a problem would not exist if he were to take up the role as successor to incumbent US coach Bruce Arena, who was told by Gulati in mid-July that his contract would not be renewed.

Klinsmann remains the preferred candidate of the USSF and is the favorite of many to take over when Arena leaves the post at the end of the year. Klinsmann introduced a number of stateside training and management techniques to the German set-up, prompting much criticism before the tournament.

Coaching techniques suited for US style 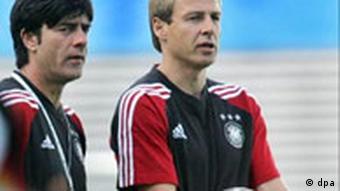 Klinsi and Jogi laid the foundations of a bright future

A sports psychologist was employed, the team's second kit was changed to the more positive color red and a number of non-sport related exercises were adopted to build concentration and togetherness. Discredited as New Age hokum at the time, Klinsi's detractors were forced to eat large dollops of humble pie throughout June and July as his Germany team rolled on.

His techniques are now being utilized and advanced by his former assistant Joachim Löw, who now runs the team and ensures Germany continues to build on the talented pool of youth at its disposal.

Klinsmann Hints at Return for Next World Cup

Germany soccer supporters were sad when national men's head coach Jürgen Klinsmann took his hat after the World Cup. During a video conference with other coaches, he dropped a hint that he may be back soon. (14.09.2006)

Could Klinsi Put An End to the Commute and Stay in USA?

After the USA crashed out the 2006 World Cup, some see Jürgen Klinsmann as a natural replacement for Bruce Arena. Klinsmann said he's not interested, but emphasized only the World Cup is on his mind -- for now. (27.06.2006)

German World Cup coach Jürgen Klinsmann, with his fresh perspective and unorthodox ways, has left his imprint on the national team and the nation. So now, it is time to move on. (12.07.2006)