Klaus Meine: ″The world was changing before our eyes″ | Culture| Arts, music and lifestyle reporting from Germany | DW | 20.04.2009

Klaus Meine: "The world was changing before our eyes"

The Scorpions' Klaus Meine says no one could have guessed what an impact Wind of Change would have. The 1989 song foreshadowed the fall of the Iron Curtain, taking on special meaning for many in both the East and West. 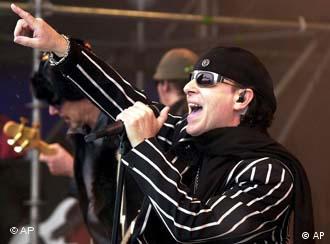 You never know how a song will develop, says lead singer Klaus Meine

Deutsche Welle: Why have you stayed in Hanover? Many stars choose to move to LA or New York, yet you have chosen to stay in a relatively small German city.

Klaus Meine: The most important thing is to have a place you can come back to, where your roots, family and friends are. Those are things you can't transplant. We're cosmopolitan and have been traveling around the world for so many years.

Wherever we are, the music helps us to feel connected and we never really feel like strangers, whether we're in Siberia or the Amazon. But it's really important to be able to come back to the place where your roots are, where your family and friends are.

You recently received an Echo music award for your life's work. Does that make you feel old?

No, not at all. We're very honored. The Echo is a very important award and it's a big honor to receive one. We don't see it as a final cadence, but rather as an incentive, or motivation to keep playing for our fans in the coming years and to do that which has kept us going for so many years - that is, living our dream of making rock music. 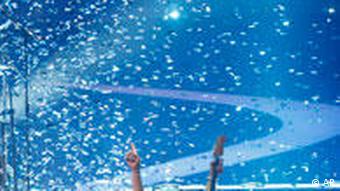 Scorpions won an Echo in February in Berlin

What are you currently working on?

We're working in the studio at the moment and preparing a new project. After a very turbulent 2008 with 60 shows in 22 countries, we're now trying to breathe a bit and charge our batteries - but also to be creative.

We're working on new songs that will hopefully come out towards the end of the year. That's really a lot of fun, after doing all those concerts.

"Wind of Change," one of your best-known songs, became something of hymn for political change in eastern Europe. Was the song conceived as something of an ode to perestroika?

Of course not. When you write a song, you might have a certain feeling about it, but you can never be sure how a song is going to develop and what will become of it - if it will become a Top Ten hit, a number one hit, or in this case even an international hit that became like a hymn to the end of the Cold War for many people from East and West. Something like that can't be imagined or planned.

The only thing I did was try to express in the music all the emotions and everything we experienced in 1988 and 1989. We really had the feeling that the world was changing before our eyes - at the latest in August 1989 in Moscow. We had the feeling that the Cold War could be over soon, but of course no one thought that the Berlin Wall would fall just a few months later and that so much in our own country, Germany, and in eastern Europe would change. So this song has a particularly special story, which goes way beyond just being a "hit."

It's a nice feeling to know that the song touched so many people and, for many, will always be associated with these historical events.

Do you feel a special connection to Russia?

We have fans in many different parts of the world, who we have a special connection with. But we have a particularly special relationship with the Russian fans.

I think it goes back to the Soviet Union, back to 1988, when we were one of the first bands to play in Leningrad. Some of the fans traveled for 20 hours by train from Siberia and even further to see the Scorpions. And of course the legendary Moscow Music Peace Festival in Moscow in 1989 was a special moment in rock history. We've also gone back to Russia again and again.

Less than two years ago, you were invited to play in Moscow on the 90th anniversary of the Russian secret service. Prime Minister Vladimir Putin, who was president at that time, was at the concert. What is your opinion of him and his policies?

I'd rather leave it to the politicians to make a judgement on Putin and his policies. But I know that Putin is very popular in Russia, especially among the young people. Whenever we're on tour in Russia, we get the feeling that he's adored like a pop star, particularly by the younger generation.

That event in the Kremlin where we were invited to play was a television show that was broadcast across Russia. We and a few Russia artists weren't the only performers; Carlos Santana and Patricia Kaas were also there.

The Scorpions will be touring Russia again in June 2009.

Germany's Diverse Music Scene Has Room for Everyone

Contemporary music, classical, jazz or pop -- Germany’s music scene has something for everyone. Big festivals attract international artists, and German conservatories draw students from around the world. (05.02.2009)